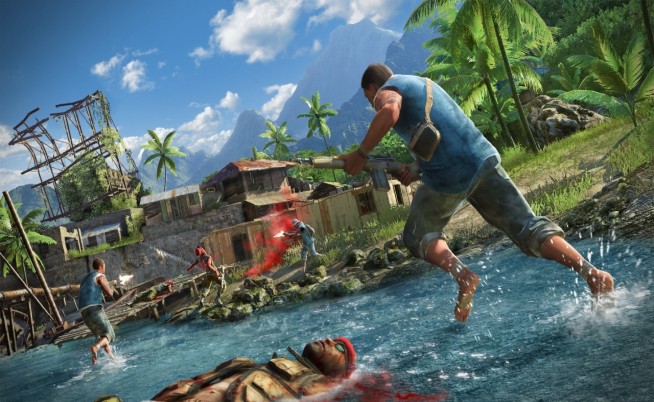 What has Ubisoft been up to lately, you ask? Why, showing off some Far Cry 3 multiplayer, of course. Brand new gameplay footage has begun to surface as has a good chunk of juicy new details, including new game modes.

Well, one of these game modes, Domination, isn’t so new to the FPS market, but is a tried-and-true experience loved by many. Check out the multiplayer footage below that details this game type as well as a number of other features included in Far Cry 3’s online MP goodness.

Some notable features you may have noticed were the battle cries, a disorienting orange haze, barrel bombs and fire!

Battle cries boost nearby teammates by buffing attributes like health or speed. From this video, it looks like the orange haze dropped from overhead airplanes confuses all engulfed to believe that anyone on the field is an enemy, friend or foe, essentially tricking players into team killing each other. Barrel bombs and other team support actions like the scout support can be called in by gaining experience points. Much like Far Cry 2, it seems that fire will also be playing a large role in this entry, which leads us to the second game type introduced by Ubisoft.

In Firestorm, teams are tasked with attacking and setting fire to the enemy’s supply depots. If one team can successfully manage to get both of the opposing team’s depots blazing at the same time, a radio comm-link will appear on the map. If the attacking team can successfully capture this objective, a friendly airplane will be called in to pour gasoline on the enemy’s burning depots, thus ending the round in a fiery wake of destruction. If the defending team manages to capture it first, their friendly pilot will fly overhead dropping petrol over the depots, calming the flames and restarting the round.

You may have also noticed an interesting feature in the video above activated at the end of each round in Far Cry 3’s multiplayer. Here, a cutscene will ensue featuring the top players of the winning team as well as the top player of the losing team. As the top achiever of the winning team, you will be granted the choice to either beat your enemy to death for all to see, or allow him to go free. The choice is yours. Similarly, an optional cutscene is included at the beginning of each round giving a quick tutorial of the chosen map, voiced the evil and crazy antagonist of Far Cry 3, Vaas.

Far Cry 3’s multiplayer seems to be shaping up quite nicely. Based off of this gameplay footage and these details, what do you think of the multiplayer so far? Leave your thoughts in the comments below!

Make sure to check out some the Far Cry 3 pre-order bonuses!