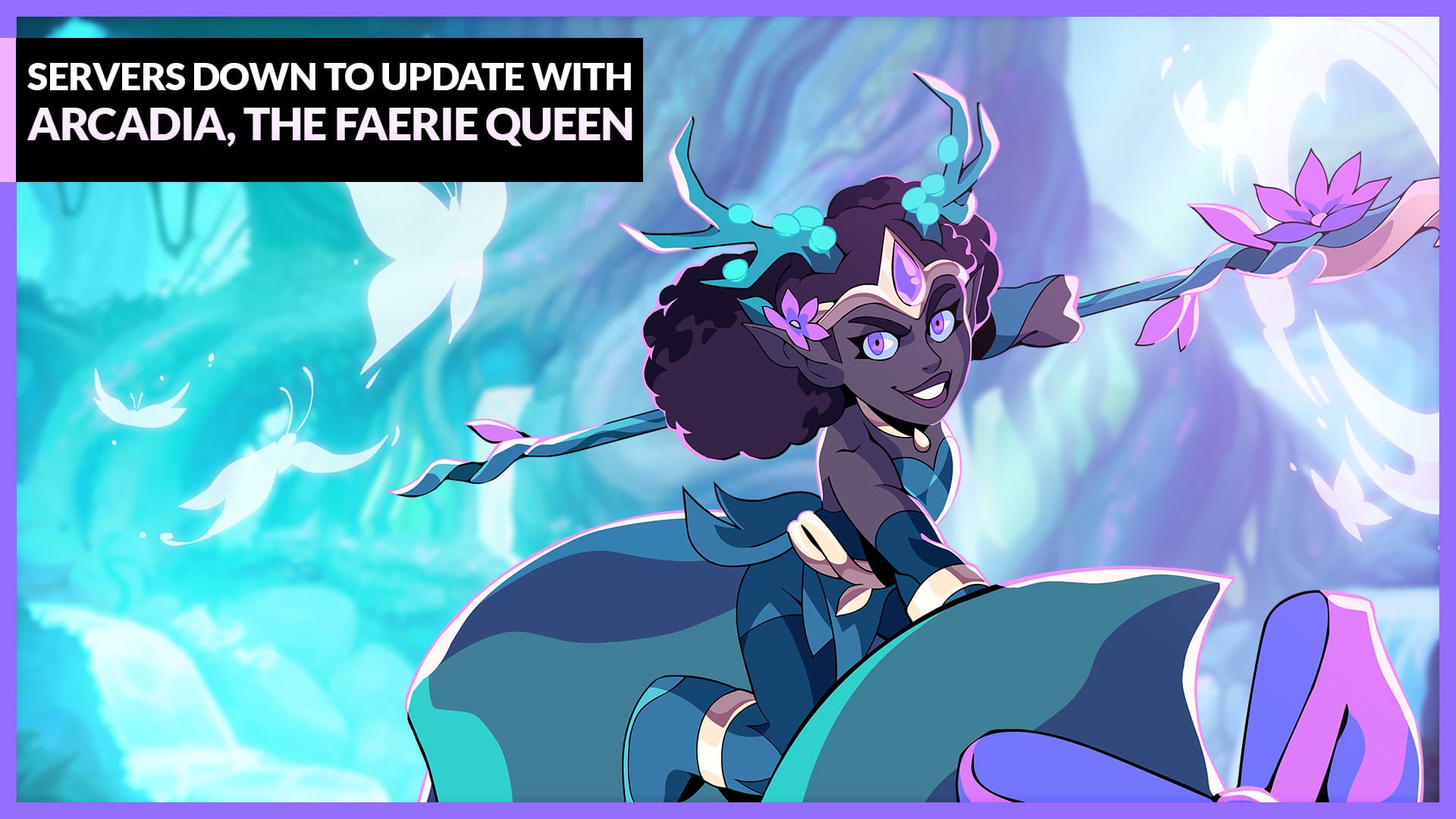 Ubisoft has released the Brawlhalla update 10.59 March 16 patch today, and this one adds the new Legend, Arcadia, plus the usual slew of changes and fixes! Check out the full Brawlhalla March 16 patch notes below.

Chosen by Orma, the singing Greatsword, Arcadia, the Faerie Queen, arrives in Valhalla with her great war beetle, Domo, and Spear for the ultimate battle. Arcadia is the 55th and newest Legend and will be joining the roster permanently!

This update includes a new handicap Test Feature, where players can strengthen or weaken players on an individual basis by changing their starting lives, damage done, and damage taken. We also graduated the Throw Clashes feature into the live game and adjusted the feature so that thrown weapons bounce less and disappear faster.

Additionally, we made a balance pass, added some game improvements, and more! For those in the pursuit of Glory, the new Ranked Season 24 starts on March 30th.

Welcome to Luck o’ the Brawl – the time of the year where you wear green or you’re gonna get KO’d! We’re celebrating the festivities with a new Skin for Isaiah and bringing other lucky charms into Mallhalla for a limited time.

See the list below for all the Luck o’ the Brawl goodies: Team up as an awesome duo in this close combat 2v2 brawl! Fight to become the chosen team as you punch, kick, and fight. Watch out for the arrow and throwing star traps. First team to 5 KOs wins, skadoosh!

In this update, we are featuring a new handicap Test Feature that allows players to adjust a player’s starting lives, damage done, and damage taken. We are also testing adjustments to the behavior of thrown weapons that include how much they bounce off targets, and how quickly they despawn after becoming inactive. Share your feedback on our Twitter and Discord. More information can be found at brawlhalla.com/test-features.

We also are graduating the Thrown Clashes feature into the live game after receiving feedback from the community!

Handicaps allow you to strengthen or weaken players on an individual basis by changing their starting lives, damage done, and damage taken.

Players can increase/decrease handicaps separately for each player.

For several stock-based game modes, players are able to change how many lives each player starts with as well.

On each of the character select, Match Preview, and Scoreboard screens you can see what handicaps are applied to each player.

For our first round of Test Features targeting weapon item behavior, thrown weapons now bounce significantly less when colliding with targets, resulting in them becoming stationary much sooner. Along with this, thrown weapons also despawn much faster after becoming stationary. These changes together result in a significant decrease in the amount of time a weapon may be picked up again.

Adjusted Test Features:
We have updated the Easy and Medium difficulties of the new bot logic to bring them closer to the current live Easy and Medium bots, as they were previously too difficult for the purpose of these lower settings.

Thanks to your feedback, the Throw Clash test feature has been graduated. Now your attacks that strike an opponent won’t trade or be interrupted by your target’s recently thrown weapon.

The previous adjustments to the Axe’s aerial kit reduced the acceleration that was allowed during the attacks, reducing the ability to change directions, slow down, or speed up after the attack was initiated. This patch further decreases the allowed acceleration, but also reduces the maximum travel speed allowed during the Neutral Air, Side Air, and Down Air. We have also reduced the threat coverage of the Neutral Light and threat coverage near the user for the Side Air, making it easier to dodge through or maneuver around these attacks.

Blasters Side Air has received an increase in Variable Force for better knockout potential, as this weapon could often struggle to finish stocks even when an opponent was heavily damaged. The Down Air now has a more vertical angle of knockback, affording new string routes at most damage ranges and combos at high damage ranges, while also improving the consistency of certain early gravity cancel options.

In a similar fashion to the Axe kit, while the previous adjustments reduced the acceleration that was allowed during certain Hammer aerial attacks, we have also decreased the maximum travel speed allowed during the Hammer Neutral Air this time around. The Hammer Side Air has also received a similar reduction to threat coverage near the user, making it easier to dodge through or maneuver behind this attack.

The Katar Recovery attack would often struggle to score knockouts until very high damage ranges, so we have increased the Force to better fit its diagonal knockback angle.

As one of the Spear’s main approach tools and starter attacks, we have decreased the Recover time on miss to bring the risk in line with its total duration and telegraphed movement.

The Sword’s ground kit can rotate sizable threat coverage very quickly compared to other weapons, so we have increased the Recover time on miss for the Side Light for greater punish opportunities against this mobile attack. We have also increased the Time to Hit of the Sword Neutral Light to make it easier to contest this attack in the neutral game, and to open wider dodge windows during strings that involve this attack. Isaiah’s Side Blasters now has greater Force to better fit its relative risk and lengthy total duration. We have also reduced the Minimum Charge time of Isaiah’s Neutral Cannon for quicker anti-air responses. Lin Fei’s Side Cannon and Neutral Katars have both received increased Damage to better match their total duration and high risk nature. Magyar’s Neutral Greatsword and Neutral Hammer now have decreased Recover time on miss for less risk on these anti-air attacks. We have reduced the grounded Recover Time on miss for Zariel’s Neutral Bow for less risk that better fits this low anti-air attack. The Down Gauntlets now has greater Force to better match its relatively low threat coverage.

Train to become an elite soldier like Isaiah with the Shadow Ops bundle! This pack includes:

That’s about it for the patch. Once a new title update or new content drop is announced, we’ll let our readers know. Stay tuned by bookmarking our Brawlhalla game hub.