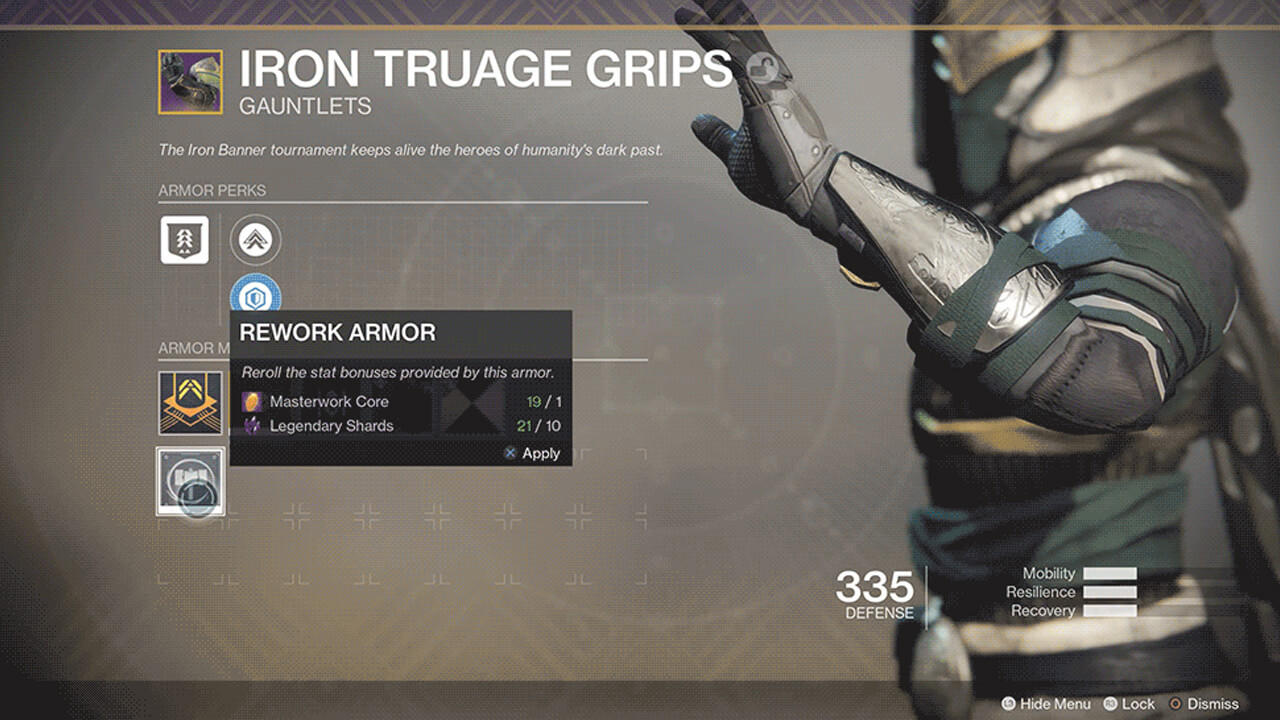 In its latest “This Week at Bungie” Destiny 2 blog post, the developer gave details on the next update to the game. Community Manager Cozmo described the new Armor Masterworks system, as well as potential Shader changes, and the new loot coming to the raid and Iron Banner. We’ve also been given a preview of upcoming patch notes.

Many of you have already been discovering Masterwork weapons and adding them to your collection. Next week, we are adding Armor Masterworks to the mix. All Legendary armor now has a chance to drop as a Masterwork. The same rules apply as with the weapons, you will have a higher chance of getting Armor Masterwork from Trials of the Nine and Raid activities. But you might get lucky with an engram from Lord Shaxx or any other vendor who offers engrams.

You can now rework stats on your armor. The results will still be stat packages that are found on other pieces. There is a UI bug right now where if you try to quickly rework Armor sets it will appear to rework to the same stats. It doesn’t actually perform the rework function or use your materials, but can be quite scary, so we wanted to give you a heads up.

Shaders are individual items, and individual items trigger individual reward bundles when dismantled, even when those rewards are simple. That creates a challenge for us that we haven’t yet addressed, which is triggering dozens (or hundreds) of reward bundles simultaneously when an entire stack of shaders is dismantled. This is challenging not simply because an arbitrary number of rewards need to be run and delivered simultaneously, but because we also have to safeguard against scenarios where this produced items that couldn’t fit in your inventory, which could be instantly lost (ex: shaders that produce Glimmer could easily evaporate into nothing if you were at or near the cap.)

It would be relatively easy to find another button on the controller (L2 + X?) and let players actually delete a full stack, but that isn’t the spirit of what players are asking for, so we’re looking at a stronger solve. In addition, we’re also looking at how to address other shader feedback:

The game is Control!

This will be the first time Lord Saladin returns to the Tower in Season 2. There have been some changes to how you’ll go about decorating your Guardian with relics of the Iron Lords.

First, we are adding new items to the engrams you will find waiting for you when you visit Lord Saladin. There will definitely be Season 2 weapons in the Iron Banner Engram and we will be adding more in the next event. Here is a look at what rewards you can expect to earn next week.

If you are missing items from last season, they will still drop as possible rewards from the engram. There is also a new emblem that tracks how many lifetime rank ups for Iron Banner you have earned in Destiny 2. You can earn it by completing the Iron Banner Milestone.

We’ve received a lot of feedback from previous Iron Banner events that players preferred a way to directly acquire items. We have added the ability to obtain armor and three different weapons from Lord Saladin during each event. Here is what he has to offer next week.

The final way to earn rewards is by completing challenges. Ornaments are available for all your Iron Banner gear and you can unlock them by completing various objectives for Lord Saladin.

There are no limits to how many engrams you can acquire or how many tokens you can earn. Get as much playtime as you can during the week. It will always move you a little closer to opening another engram, earning an ornament, or purchasing a piece of gear from Lord Saladin. Go nuts!

Raid armor now drops with perks that function on the Leviathan; these appear on mods that are selectable on both new drops and existing Raid armor pieces you may alread have in your inventory. Additionally, these mods are reusable: if you swap to another one these will always be in the list to swap back to on your Raid armor for the low, low price of 1 Calus Token. Since no one wants to take a -5 Power penalty if they remove their Legendary mods while in the Raid, all the Raid mods are Legendary by default. This should also be extra icing on the cake for players who can’t seem to get that last mod they need to max their gear out.

The goal for these perks was to elevate the power of Guardians in the Raid, and we aimed to build things that were useful in every encounter. As a result, we avoided things that relied on specific mechanics to be useful and moved to broadly useful perks like “Recharge your grenade when you activate your Super” and “Deal 20% extra damage after getting a melee kill” as opposed to things tied to specific mechanics.

Clearing Prestige now gives you Prestige and normal drops. If you have the prowess to clear Prestige, then you’ve proven yourself enough that we don’t need to force you to go back and do Normal as well.

We didn’t want players to have that “dead encounter” feeling anymore, where they had already received all the rewards for that encounter and were just waiting on a later encounter. Or, even worse, the disappointed feeling where no one in your raid group gets something, which could happen under rare circumstances in the old system. So we’ve unified the drop tables for the encounters so that raid gear isn’t tied to a specific encounter anymore (with an exception I’ll get in to down below…) so no matter what encounter you clear, you can get raid loot. Oh, and every encounter has a chance to drop an exotic. Not an engram that you have to take back to Rahool for decryption, but an item you could equip and start using immediately if you want. This list of possible exotic drops is comprised of all non-quest exotics, with armor and weapons weighted equally, and is restricted to things your class can equip.

If you just can’t get that last piece to drop for you, we want to give you some agency with your tokens. For a cost of Legendary Shards and some Calus Tokens, you can purchase these pieces if you have completed that raid for the week. For instance, if you want to buy the Prestige Chest armor, you need to complete Prestige mode that week before you can do so. This is so people can’t save up tokens by sticking to normal mode and still wear the Prestige gear; we wanted to give people agency to fill in those few slots they’re missing, not negate the need to progress further in the raid. Ole Benedict will change up what pieces they have available for purchase each week.

While not quite at the grind level of the legendary Nanophoenix, we felt like we needed to add a chase item to the Raid pool to make coming back still have reward potential each week. Enter the Contender’s Shell. This Ghost can drop from the final encounter in either Leviathan or Eater of Worlds. We also included some bad luck protection to avoid the previously mentioned “Nanophoenix Problem” so that dedicated raiders can rest assured they’ll get their hands on it eventually, even if it takes several weeks.

The Contender’s Shell comes with some brand new perks that we’re hoping helps reward players that keep clearing the Raid even after they’ve gotten their Ghost. Both active only on the Leviathan, and its lair, they aim to make Leviathan encounter rewards stay awesome. First, Seeker of Brilliance enables the chance for encounters to drop Bright Engrams from their loot pools. Every time one doesn’t drop a Bright Engram, we increase the chance for the next. Remember those Exotics that can drop from encounters I was talking about earlier? Well, Seeker of Opulence means those exotics have a 50% chance to pull from a list of Exotics you haven’t collected yet instead of the standard list. Lastly, to top off this already pretty rad Ghost, we threw on Seeker of Glory, which provides a tracker for the number of encounters you have defeated on the Leviathan.

Armor Masterworks and changes to Raid rewards aren’t the only changes coming in the upcoming 1.1.2 update on January 30. Here is a look at a few of the other fixes you can expect to see in the full notes next week.

– Players in social spaces, like the Tower, receive a notification when their Lost and Found at the Postmaster is full

– Fixed an issue where Challenges were not appearing within Quickplay

For more details on these changes, you can find the full blog post here.

What do you make of these Destiny 2 changes? Happy with what Bungie is choosing to focus on? Let us know.