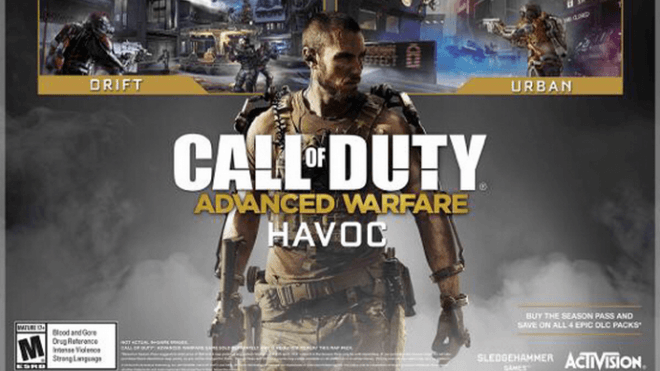 On both Xbox One and Xbox 360, the titles first downloadable expansion pack, called Havoc, is now available on the Xbox Live Marketplace (Xbox One, Xbox 360). You’ll also eventually be able to find it in Advanced Warfare’s in-game store.

As highlighted earlier, it introduces four new multiplayer maps to the mix – Core, Urban, Sideshow, and Drift. It also brings back the popular zombie survival mode made famous by the World at War and Black Ops series, but this time with a high-tech twist in what the studio is calling Exo Zombies. You can catch a round-up of new multiplayer and zombies gameplay if you fancy a look. Lastly, gamers will also gain access to the new AE4 directed energy assault rifle and all of its variants.

In addition to the new content, both the Xbox One and Xbox 360 versions of the game have been updated with a 1.7 GB and 35 MB patch, respectively. As of this writing patch notes for either aren’t quite available just yet, but as studio head Michael Condrey hinted during yesterday’s livestream of the new DLC, we know some hefty balance changes are in store for Advanced Warfare’s weapons.

Sledgehammer has posted details on the latest Xbox One and Xbox 360 patches which cover a broad range of fixes and tweaks, including weapons, maps, scorestreaks, and more. According to the studio, the PlayStation and PC updates are pending first party approval.

As a side note, Activision has stated that support is aware that “some players who have downloaded and installed the Havoc DLC pack are being given an error stating ‘A downloadable content package was removed or all profiles are signed out’.”

“We are actively investigating this issue and hope to have a resolution as quickly as possible,” reads the support page.

It also suggests checking “your active downloads to ensure that all updates and compatibility packs are fully downloaded and installed before attempting to access the content.” In addition, “clearing the cache on Xbox 360 or Xbox One may resolve this issue,” in some cases.

Likewise, Xbox Support is also “on the case,”. Right now, the official page lists Purchase and Content Usage as “Limited”.

For now, have a look at the full list of patch notes.