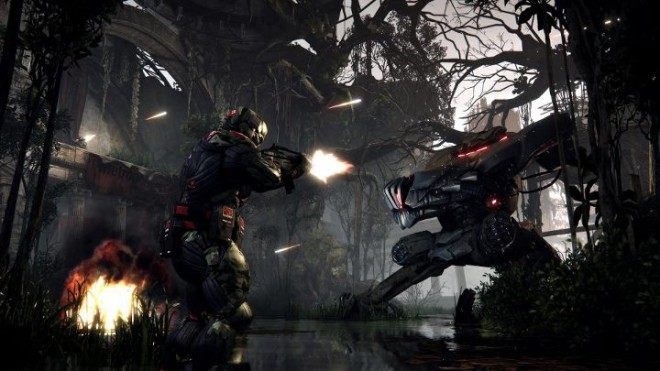 Producer Mike Read details some of the key features and game modes you can expect from Crysis 3’s multiplayer in this video introduction.

Along with the introduction of the brand new Hunter mode, Crysis fans will also have a chance to revisit the popular Crash Site adversarial multiplayer game mode, though with a few extra twists.

Players will now cycle through pre-determined Nanosuit loadouts before deploying onto the field. As before, an alien gunship will drop a pod to the ground below that each team will fight to secure for as long as possible within a set amount of time before re-locating. To aid in defensive positioning, each pod carries with it two shields that can be used be used as either protection or as a deadly weapon that can also be thrown at enemy players. This also applies to other objects as well like lamp posts and, of course, vehicles.

Also brand new to the series’ multiplayer is the ability to take control of your very own Ceph Pinger, a giant walking mech-like piece of alien machinery found on the battlefield that can be used to devastate the enemy team with superior fire power. However, it’s not without its weaknesses. Enemies can either destroy the Pinger through means of gunfire or explosives, or they can climb atop to hoist the pilot out by force.

Lastly, Crytek is also introducing the “New York Feed,” a visual information flow of what you and your friends have achieved in-game. This should hopefully keep players busy with custom generated challenges and other goodies.

Are you getting pumped for Crysis 3’s multiplayer? Sound off in the comments below.

DayZ Standalone May Arrive as Early as November, According to Creator, More on Update Process