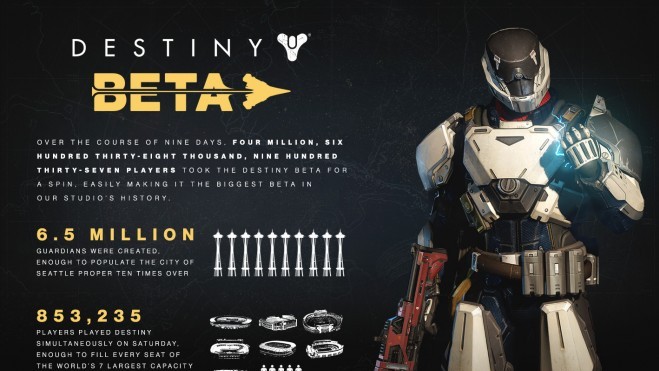 Earlier this week, we learned that over 4.6 million gamers played the Destiny Beta on the PlayStation 4, Xbox One, PlayStation 3, and Xbox 360. But that can’t be the only set of stats that developer Bungie has locked away in their studio. In fact, no, it isn’t.

Via Bungie’s latest Weekly Update, the studio has unleashed more stats than you would probably ever want to know about the beta in this nifty info graphic:

That’s a lot of numbers and a lot of gamers who are probably dying to continue their journey in Bungie’s brave new world when Destiny launches this September 9.

As for Bungie’s favorite stat: “At its peak, the Destiny Beta became the most simultaneously played Bungie game of all time,” wrote community manager David “DeeJ” Dague. “There were more people online at the same time to play Destiny than any other game in our history. The Beta was more played than even final versions of previous Bungie games. You joined forces to populate the last safe city on Earth, and blew our minds.”

Lastly, here is the player emblem all gamers who participated in the beta will receive when Destiny officially launches:

PC Arena Shooter From Reakktor Studios, Toxikk, Is Bringing FPS Back to 1999