Early last year, EA announced that Respawn Entertainment boss Vince Zampella was tasked to lead DICE LA, and that the studio was working on an unannounced game. It seems the guesses on what the studio is working on can be laid to rest, as it’s now been confirmed that it is indeed a Battlefield game!

Over on Twitter, Senior Design Director at DICE LA Justin Wiebe made people guess what EA franchise he was working on: 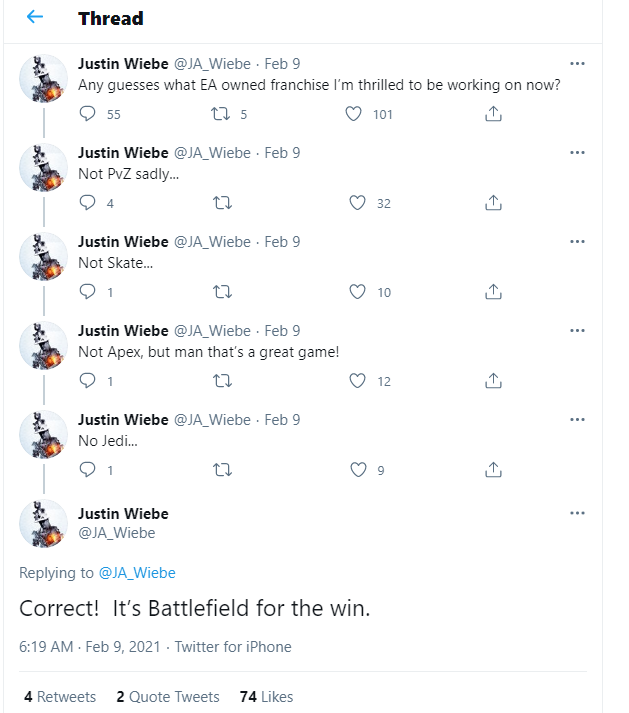 Given how Zampella teased that the studio is working on a shooter, this really shouldn’t be that surprising. Of course, the big question here is: Is DICE LA working on DICE Sweden’s still-untitled Battlefield game that’s confirmed to be out this year? Or is this a separate Battlefield title completely? We’ve reached out to EA for further clarification and will update the post if we hear anything back.

DICE LA was formed in May 2013, and consisted of devs from EA’s Danger Close Games. The studio (DICE LA) was originally seen a support studio for DICE Sweden, with the studio working on DLC and post-launch support for mainline Battlefield titles like Battlefield 4, Battlefield 1 and so on.

Could the rumor that DICE LA was working on Bad Company 3 be an actual thing? We certainly hope so.