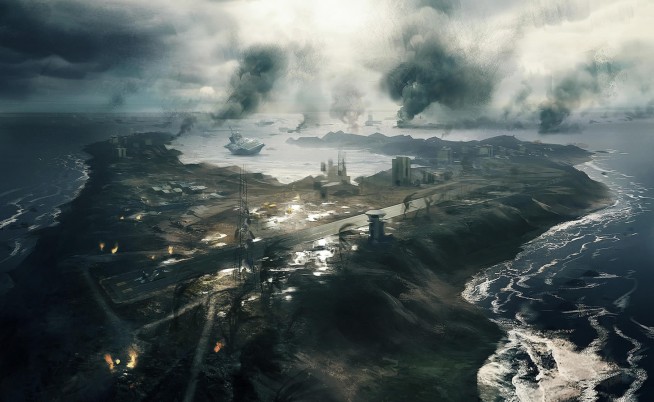 In the latest issue of Inside DICE, Lead Gameplay Designer Gustav Halling walks Battlefield 3 fans through the evolution of the popular Battlefield map, Wake Island, from its 3-flag to 5-flag variant on consoles, including other small tweaks made to all versions.

When the last Battlefield 3 expansion pack, Back to Karkand, dropped back in December, fans were treated to four of the most memorable and classic Battlefield maps, including Strike at Karkand, Gulf of Oman, Sharqi Peninsula and Wake Island. PC players, thanks to the platform’s powerful hardware, were able to experience these maps to their full potential, meaning both 5-flag and 6-flag variants were included in some of the map layouts. Unfortunately, hardware limitations of the consoles meant a 5-flag variant of the popular Wake Island was initially impossible. Not only that, but play tests showed that the lower player count of 24 players on console meant 5 flags would have stretched the player base too thin.

Up to this point, the only version of Wake Island that strictly console players would have been able to experience was the version found in the standalone, downloadable title, Battlefield: 1943. This version did, in fact, include a 5-flag layout, but was significantly scaled down (by 30%, according to Halling) compared to the initial size of the original Wake Island. This made for more action-packed gameplay while keeping a larger number of capture points.

Nevertheless, the outcry for a 5-flag layout of BF3’s Wake Island on consoles hit the internet in full force, eventually inspiring Halling to find a way to make it happen. He secretly began working on this project, finding new ways to improve upon the hardware limitations of consoles. Knowing that the upcoming Battlefield update that was to hit in March or April, Halling set out to achieve this goal by then.

This meant that a few tweaks needed to be made to the Frostbite 2 engine as well as to the general layout of the map. After sorting out some techinal issues, Halling took the PC version of BF3’s Wake Island and began play testing from there. One noticeable change was the new placement of the ani-aircraft guns which are now situated on the beach. This change also made into the PC version as well. You can check out images of the different layouts below:

In conclusion, a brand new 5-flag layout of Wake Island was settled upon for the console audience and was integrated into the latest patch. Of course, players still have the choice to continue playing on the 3-flag variant, which Halling states players might find more action-packed, especially at the capture points. While the 5-flag variant is now a viable option, players should expect more vehicular combat and sparsed-out firefights in between flags.

After having a taste of both 3-flag and 5-flag Wake Island variants, which one do you prefer? Let us know in the comments below!

Remember, you can check out more of Halling’s work in the upcoming, vehicle-heavy, Armored Kill DLC.