Digital Illusion CE’s highly anticipated Star Wars first-person shooter is still a ways out, but a small glimpse of what the studio is working on every now and then is giving fans of the iconic universe much to look forward to.

Better yet is what’s in store. According to EA CFO Blake Jorgensen during the company’s most recent earnings call, there’s “More to come in the next couple of months on [Star Wars Battlefront] as more about the movie comes out as well as more about our title comes out.” According to him, EA would like to treat Battlefront in the same vein the company has treated Battlefield titles in recent years. “You should consider that a very large activity for us [this year] and a very large focus — similar to how we’ve thought about Battlefields in the past,” he added.

For now, IGN managed to squeeze a few new details — and even some new concept art — out of Star Wars Battlefront Design Director Niklas Fegraeus.

“The scale of our maps and modes offer a great variety,” Fegraeus explained. Hoth and Endor, for example will offer different gameplay experiences.

“We have actually made the decision to specifically tailor certain maps to certain game modes,” Fegraeus continued, “and what we get from that is not only incredibly varied scales, but also gameplay that will allow players to live out some of their most memorable Star Wars battle fantasies.”

He says that “Perhaps the hardest part about bringing the franchise back is managing expectations.”

“Star Wars fans, including ourselves, are incredibly passionate about the universe. Each of us have our own personal favorites. However, with the talent we have here at DICE, the Frostbite technology at our fingertips, and the fantastic working relationship we have with Lucas, I believe we will deliver a Star Wars experience that excites fans around the world and gives them the chance to play out battles in some of the most iconic locales in the series history.”

Here’s a look at what Star Wars Battlefront’s art department has been cooking up. 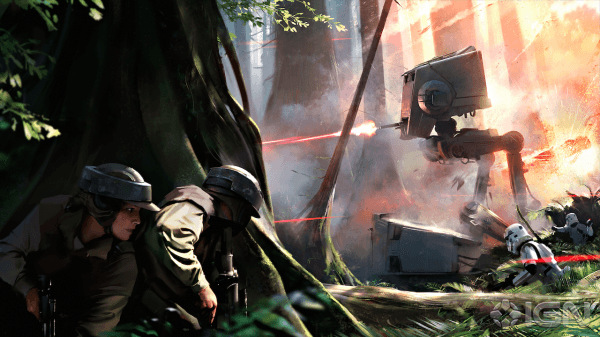 Jorgensen reaffirmed earlier this week that Star Wars Battlefront is still on schedule to launch this Holiday season in close proximity to the upcoming new movie, Star Wars: The Force Awakens.