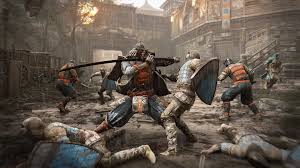 Ubisoft wants to get in more players to cleave, smash, chop and decapitate one another in For Honor! To rope in more gamers, the publisher has activated a For Honor free weekend event which is already live now, and on all platforms.

Starting now (November 9), until November 12, players  on the PlayStation 4, Xbox One, and PC, will have full access to the game’s content for the entire weekend! These include five multiplayer mode, campaign that can be played solo or online co-op, and of course, the diverse set of heroes.

Those who like what they played, Ubisoft is offering a 60 percent discount on For Honor digitally across all platforms. And as one can expect, any progress made during the free weekend will carry over to their copy of the game.

In addition to that, there’s also Season Four of For Honor happening soon, and Ubisoft is giving players a chance to get a sneak peek of it all on November 11, starting at 2 p.m. ET. You can watch it on the official For Honor Twitch channel, where the Season Three finale will be broadcast live as well.

Anyone who’s playing For Honor? Is it worth giving it a go now?