With the big Battlefield 5 6.2 patch releasing tomorrow, a lot of players are looking forward to the changes given they are reverting most weapon and damage models back to how it was (BF5 5.0 values according to DICE). For those not happy with the current BF5 time to kill (TTK), it seems the game’s former Multiplayer Producer was on your side when it comes to BF5 time to kill changes previously made by the studio in previous patches.

Announcing his departure from the studio back in January, (former) Battlefield 5 Multiplayer Producer David “tigger” Sirland announced on March 3 that it was his last day at DICE.

Last day! Weird and Exciting at the same time. It's been grand, DICE – So long and thanks for all the fish!

In announcing that, some Battlefield fans asked him about a few touchy subjects regarding Battlefield 5, and naturally, it dived into some BF5 time to kill changes discussion, Sirland commented matter-of-factly to a fan on Twitter that he “fought hard” against changing the BF5 TTK in the first place, but other people felt differently, hence here we are. 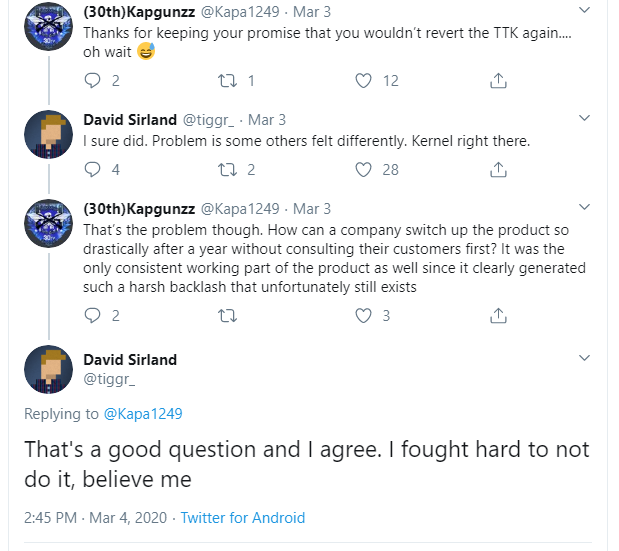 For those wondering, Sirland was in charge of Battlefield 5 multiplayer “until launch,” and a few months after that, though he had to take a parental leave soon after, wherein a lot of changes happened to the game both “good and bad.”

While Sirland’s tweets might be a good example on how DICE managed to alienate some of its player base (and even devs, it seems) when it comes to the changes the studio made regarding weapons, damage models and whatnot, players are getting the changes they want in tomorrow’s patch.

Speaking of which, you can read up on the full patch notes for tomorrow here.

Are you surprised at Sirland’s admission or not really? What’s your stance on BF5’s TTK currently? Is it really that bad or are players overreacting? Sound off in the comments below.

You Can Now Get the Modern Warfare Tamagotchi Watch That Feeds on Kills for $10, Watch the Trailer