Hoo-boy! Here we go again! We already know how successful Fortnite is on consoles and PC, right? And we also know it’s been a success even in its invite-only state on mobile platforms, right? Well, apparently, it’s way bigger than any of us has ever thought of!

According to intelligence firm Sensor Tower, Fortnite mobile revenue is at a staggering $1.8 million after Epic lifted the invite-only requirement earlier this week! It surpassed the average revenue of $620,000 by over 190 percent, and is considered one of the most successful mobile launches of all time. 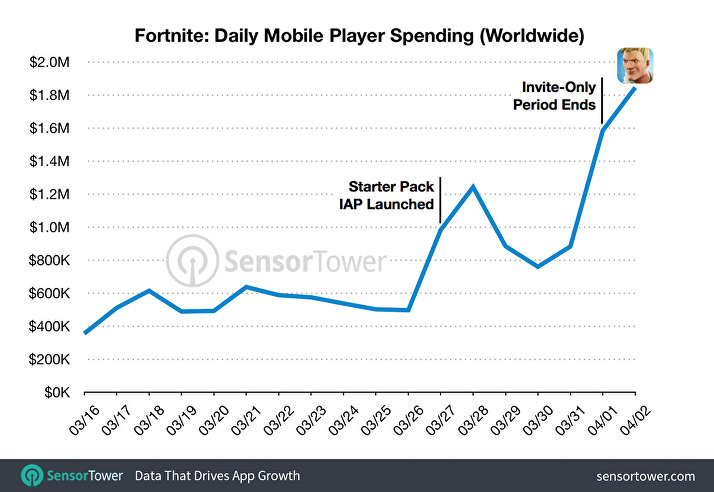 What’s even more impressive is Fortnite isn’t even available on Android platforms yet! To date global installs of Fortnite on iOS have already exceeded 11 million since launch.

Here’s what Randy Nelson, head of mobile insights at Sensor Tower had to say:

Of course, the question on everyone’s minds isn’t how much Fortnite can earn, but how much more is it poised to make when it eventually arrives on Google Play. If its performance on the App Store to date is any indication, we can easily see the game grossing $3 million or more per day once the Android user base grows to a comparable size in relation to iOS – and that’s potentially just the beginning for what started as a surprise release and it already one of the most successful mobile game launches ever.

Given it’s now open to everyone, and with the impending Android availability, the Fortnite mobile revenue numbers will be insane once Epic Games has everything rolling.