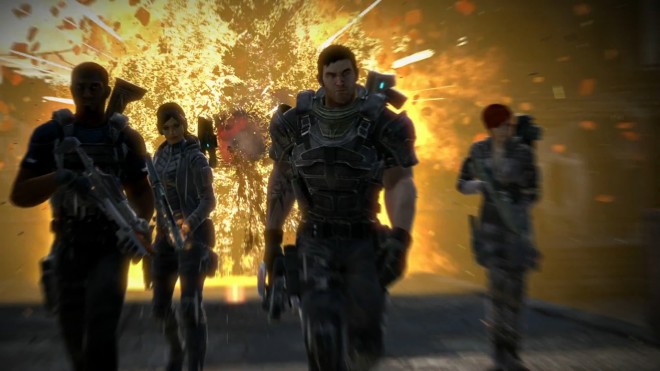 Fuse, a third-person, co-op action shooter from Insomniac Games is out on the Xbox 360 and PlayStation 3 this May 28 (May 31 in Europe), but those eager will get a chance to test the game out before hand.

Hitting the Xbox Live Marketplace and the PlatStation Netwok on May 7, players will be able to sample the game by playing solo, 2-player split-screen, or with up-to four friends online as four elite operatives  – Dalton Brooks, Izzy Sinclair, Jacob Kimble and Naya Deveraux – each with their own unique gameplay experience and “xenotech” weapon.

CEA Ted Price writes, “Fuse takes four player co-op in a new direction with features you won’t find in other third person shooters: from LEAP where you can jump between each of the four unique agents at will to the experimental Xenotech weapons to the deep RPG-like character progression system. And by the way, all of these features rock for solo players as well.”

From what we’ve seen of the game so far, Fuse looks like a fun mix of nifty gameplay elements and pure action that could prove a worthy addition to your roster of co-op shooters.

Star Wars: Battlefront III – Over 1 Hour Of Gameplay of The Cancelled Starwars Title