God of War: Ascension is just a few weeks away and Sony is already prepping for launch.

First on the list of items is the launch trailer.

Eager for more? Well here’s some good news. If you weren’t apart of the Rise of The Warrior challenges, then you missed out on the incredible Single Player demo last week. Fear not, though, as Sony will be releasing the demo along with today’s PlayStation Store Update (also includes Uncharted 3 F2P Multiplayer).

Lets not forget that this is the first in the God of War franchise to feature multiplayer. As mentioned, we suggest you start playing the God of War: Ascension Rise of The Warrior as you’ll earn countless rewards including early XP and exclusive weapons/armors. Down below is a list of weapons/armors you can earn through the social game. 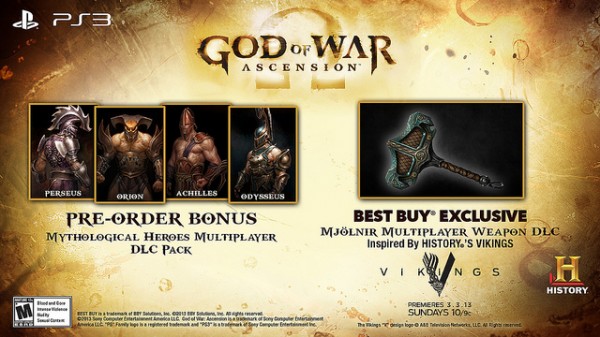 As a fan of the series, the Single player has always been the main focus, though while testing out the Multiplayer, I can say that it’ll be one worth playing. If you haven’t read our impression yet, you can do so by clicking here.