Much like Max Payne 3‘s online component in which featured ‘Crews‘ – a clan feature that featured a crew leader and members put into sub-groups depending on what they specialize – Rockstar Games have confirmed that GTA Online will be bringing back the Crew feature, but with a twist.

According to a recent blog update, GTA Online will implement a ‘Hierarchies’ feature that will allows Crew leaders to assign special ranks to members, designating the responsibilities of crew management and assuring that loyalty and performance are rewarded appropriately.

These special ranks for crew members are divided among four tiers, ranging from Commissioners all the way down to the lowly Muscles, with Lieutenants and Representatives acting as the in-between tiers. For more information on the responsibilities for each tier of crew members are, feel free to check out the details and hierarchy ‘tree’ below: 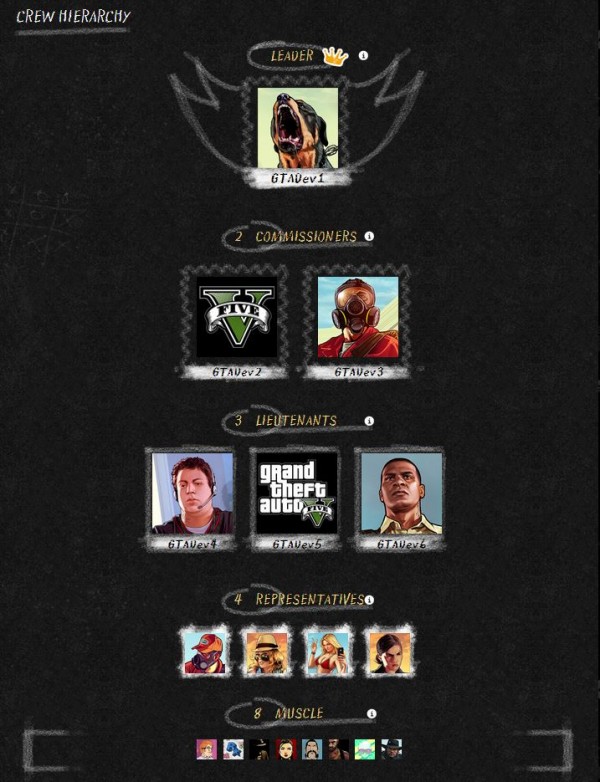 By default, any new member accepted into the Crew will be put into the Muscle tier until anyone who is a Lieutenant or higher promotes you. Speaking of promotions, despite the crews being capped on how many members you can include, it is possible for any Crew to have as many members designated to one tier.

Grand Theft Auto V is to be released on September 17 for the PlayStation 3 and  Xbox 360 platforms, with GTA Online launching on October 1. Don’t forget to stay tuned to MP1st around 11 AM EST today as Grand Theft Auto V’s official trailer will be revealed.