It’s no secret by now that Call of Duty: Modern Warfare is one huge game when it comes to taking up space in your platform’s disk drive. While Infinity Ward has acknowledged the Modern Warfare file size, it seems the studio has now taken a more active approach.

Loading the game on the PS4, players will be greeted with instructions by the studio on how to reduce the Modern Warfare file size! Here’s what you’ll see upon booting up the game: 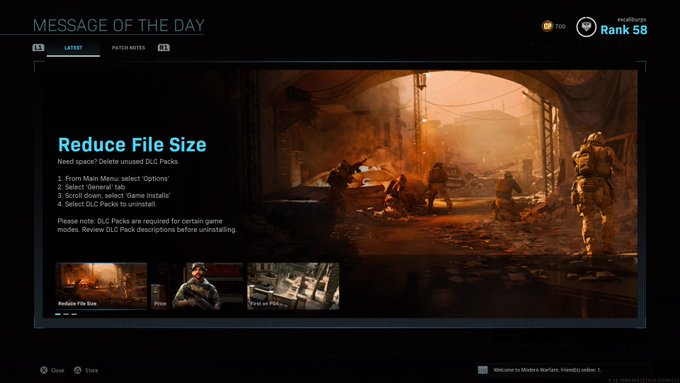 If you see it, you won’t miss it given the big “Reduce File Size” lettering. Here’s a step-by-step guide via Infinity Ward:

As far as we’re aware, this is the first PS4 title to offer this kind of feature wherein you can shave off its file size by deleting specific portions of the game. Then again, I doubt there’s any title out on the platform that’s as big as Modern Warfare has been.

How have you dealt with Modern Warfare’s massive file size? Has this been a big enough factor that you considered uninstalling the game completely?

Remnant From the Ashes Update 1.15 June 17 Pushed Out for Consoles