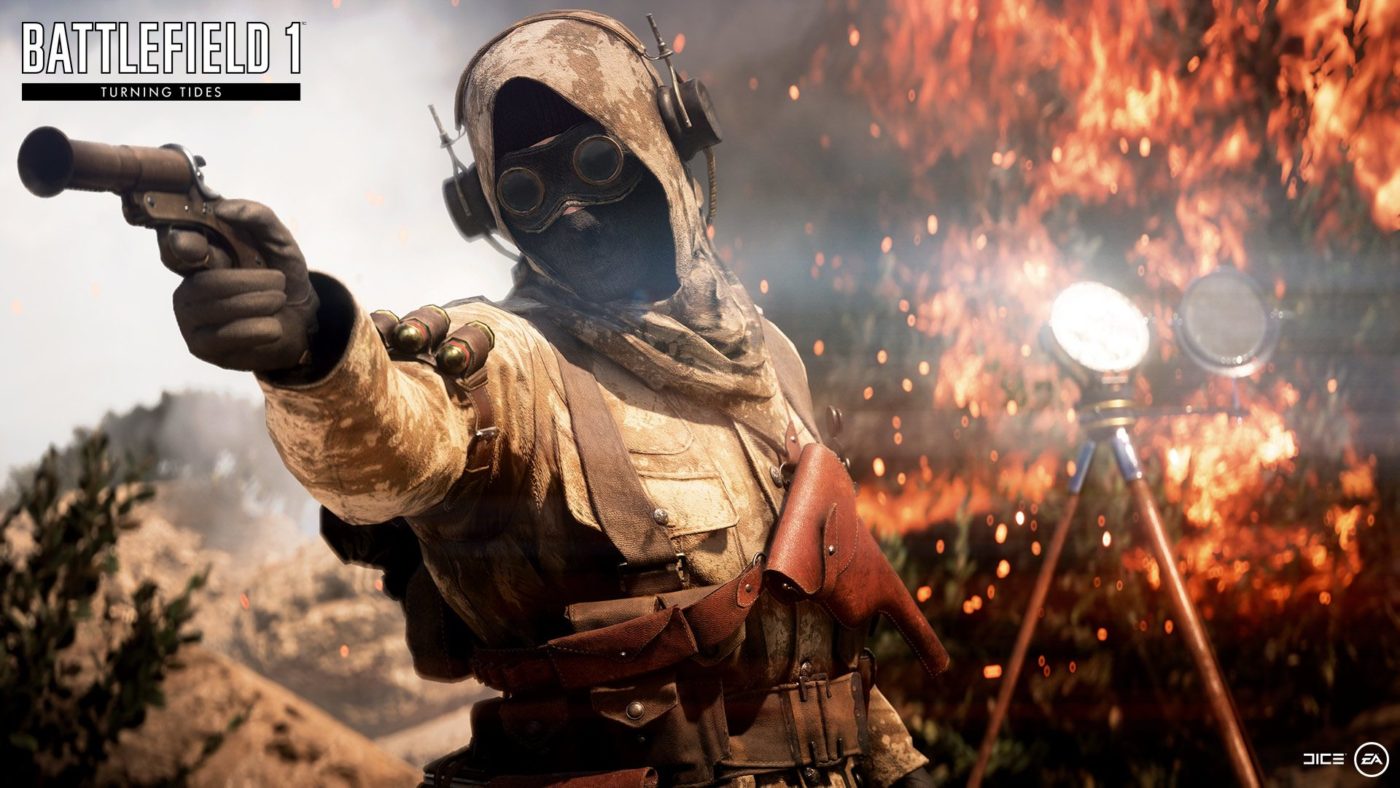 In addition to the new content introduced with the second Battlefield 1 Turning Tides update, a huge number of weapon balance tweaks were made. These changes really shake things up when it comes to gunfights, and veteran players will want to study the patch notes carefully in order to adapt to the new meta.

Find the weapon balance changes, as well as other big tweaks, in the full list of patch notes below:

This is Battlefield 1’s quintessential naval map. With its immense scale and focus on vehicular combat, it’s ideal for Conquest Assault, the only game mode available on this map.

This is the first naval battle of the Great War, where the British Royal Marines commenced a surprise attack against the German navy. Attackers speed to the red cliffs and rocky shores to gain ground, where infantry can use large rocks and dunes as cover from battleship shelling. Control Bunker Beach and you’ll have access to a battery cannon to defend against the onslaught. Take cover behind the rocky wave breaker wall to safely engage the enemy beyond the sinking cruiser, as they take a foothold on the nearby Düne island. Finally, assert your dominance in the first ever Battlefield 1 Dreadnought vs. Dreadnought battle.

Under the veil of night, British troops reinforce the treacherous raid on the Belgian port of Bruges-Zeebrugge. Join the concentrated battle as the British Royal Marines wrestle to possess the German controlled, concrete mole. Advance past the war-torn breach toward the heavily guarded submarine pen. Utilize the dock openings to gain access and overcome the enemy. Torpedo boats, planes, L-Class Destroyers, Dreadnoughts, and the menacing C-Class Airship battle for control around the port. Be mindful, as infantry soldiers fight back with the anti-aircraft guns placed along the coastal wall and battery cannons that are lining the nearby beach at the base of the mole.

The all-new C-Class Airship is equipped with 4 seats and 2 package loadouts. Pilots can deliver an immense payload of artillery and bombs, as they navigate the skies. Front gunners are equipped with a 76mm cannon, while rear gunners provide support with a 20mm Autocannon. Top gunners offer anti-aircraft protection with a mounted AA gun on the top of the vessel. Like tanks and the new L-Class Destroyer, pilots can self-repair the C-Class Airship to maintain dominance in the sky.

With the addition of new weapons from each expansion pack and the growing community of skilled players, we found it necessary to rebalance the weapons to increase the pacing of combat and balance the loadout options among and between the various classes in Battlefield 1.

These changes are far-reaching, across the breadth of Battlefield 1 weapons, which may be difficult to feel when trying them out for the first time. There are a lot of changes, which may not be noticeable immediately and may only become more apparent with time. Players should find a faster time-to-kill (TTK), be more capable in out-numbered scenarios, and find greater distinction between different weapons and weapon types.

The following summaries detail how these changes will alter the encounters at the ideal engagement ranges:

The biggest difference here is that Support weapons will be slower to get on target at close range, pushing the engagement slightly more in favor of the Assault than it already was

These classes are opposite extremes; the winner of the engagement will usually come down to range

The main change here is in how the Medic approaches an LMG. Previously the SLRs were like LMGs in terms of raw TTK, meaning it was often possible to outshoot one head to head. With the changes this is more dangerous, as the LMG will be more likely to kill the Medic before he can reach cover to heal

LMG accuracy at close range is weaker than before however, plus Medic rifles have improved range, leaving the medic with several options of approach – take potshots at the Support from longer distances, or attack from unexpected angles to exploit the LMG weakness when not already in ADS or on a bipod

Support is slightly more dangerous at long range than before. There is therefore increased pressure on the Scout to score a one hit kill from an unexpected location before the Support can return fire

With regards to weapon family specific changes, you will see an overall reduction in the number of bullets required to kill a target at a weapons ideal engagement range, along with some general improvements to their handling:

They have suffered from inconsistency due to how shotgun pellets work, which we’ve improved by reducing how much randomness plays a part in the shotgun dispersion. All shotguns now fire 12 pellets. The dispersion is now broken down into 12 sectors, 6 in an inner circle and 6 in an outer ring. Each sector will contain 1 pellet. This ensures that all 12 pellets are more evenly spread over the dispersion cone, and prevents all the pellets from bunching up in one area, which could cause lucky one hit kills at longer distances, or inversely result in a complete miss.

SMGs remain very strong close-range weapons, second only to Shotguns
High bullet damage drop-off and large spread make them ineffective at longer distances than all other weapons, with the exception of Shotguns
The variance in raw TTK of the SMGs has been reduced, reducing the benefit of that advantage on specific SMGs (such as the Hellriegel and Automatico) and increasing the options available to Assault players

LMGs offer the most firepower, but at the cost of handling and mobility
The strongest weapon at medium range when ready for a fight

The most flexible weapon

Much better ranged performance than SMGs and shotguns

Better handling and can get on target accurately faster than LMGs

These are the least changed weapon type

Reduced the requirements of the Ribbon of Justice from 5 kills in a round to 2.

The player outlines now comply with the colorblind settings.

Players can customize the size and opacity of world icons in the gameplay options.

Hit indicators can be customized with different colors for critical hit kills.

Detailed mini-map/full map customization is now in the gameplay options.

Vehicle spawn logic has been changed to allow players to select the spawn point even if a vehicle is not available, which will allow players the opportunity to customize vehicles at the deploy screen more often.

Numerous weapon balance tweaks. Here’s a short list of some noteworthy changes among many more:

Farquhar-Hill damage drop off started at 34 but now is 46.33 meters.

Farquhar-Hill damage drop off ended at 52 but now is 59 meters.

Increased the 3-hit kill range of the Cei-Rigotti by 10 meters.

Adjusted the spread for LMGs.

The vertical recoil bonus on the Storm variants for SMGs and LMGs have been reduced slightly.

The SMG 08/18 Optical’s first shot spread multiplier has been reduced.

LMG bipods will now remove spread increase while firing entirely when mounted with a lower reduction in horizontal recoil.

Increased one hit kill headshot range of the Russian 1895 Trench from 41 to 64 meters.

Fixed an issue where the Infiltrator Elite flare would brighten the entire level for the opposing team.

The K Bullet system, and the damage dealt, was refined for the M91 and Carcano.

Fixed an issue where occasionally empty shells would not eject from the Carcano.

Fixed an incorrect recoil decrease for the Maschinenpistole M1912/P.16.

Fixed a lower than intended recoil decrease on the Arisaka.

Fixed an incorrect recoil decrease for the M1917 Trench Carbine.

Fixed the accuracy of the M1917 Trench Carbine when crouching, moving, and shooting from the hip.

Reload timers were fixed for the M1917 LMG by removing the artificial delay on the short reload.

Fixed an issue with the AA sights on the M1917 MG where the rear sight wasn’t properly attached to the feed tray cover.

Improved alignment of the iron sights of the FA Automatic.

Fixed an issue causing shotgun damage and audio to be spread across multiple frames.

Reduced the inner blast radius of the Martini- Henry grenade launcher, on the Infiltrator Elite Class, from 2 to 1 meter.

Fixed a bug where the Martini-Henry grenade launcher did not use its arm time, resulting in higher than intended damage.

Reduced the ammunition count of the Martini-Henry grenade launcher from 21 to 11.

Reduced the reload threshold for the Martini-Henry grenade launcher.

Fixed a bug that allowed the Bristol Attack plane and Ilya Muromets Heavy Bomber to utilize weapons from multiple packages.

Increased the mine removal radius for the A7V Heavy Tank.

Greatly improved the reliability of the AA guns when firing against bombers from certain angles.

AT Rocket Gun, and similar weapons, can now be fired from the passenger seat of vehicles.

Infantry placed mines (AT and Tripwire) have been adjusted so players can no longer stack them close together. To compensate for this, the power of each mine has increased:

AT Mine damage has increased by 50%.

AT Mine radius has been adjusted to 2 meters.

Tripwire Mine – HE deals twice as much damage to sprinting players.

Tripwire Mine – Gas has a small 15 damage explosion when tripped – dealing damage to player who may already be wearing a gas mask. This damage is doubled for sprinting players.

Fixed an issue where several weapons were causing unwanted dips in ambient SFX volume in certain parts of Cape Helles.

Fixed an issue that would allow Defenders to spawn airplanes in the third sector of Cape Helles, in Operation Gallipoli.

The Ottomans now use the Gotha Bomber on Cape Helles

Fixed an issue where the medic primary weapons were not available in the Custom Game: Armored Kill.

Adjusted the combat zones in Cape Helles on both Operations and Rush game modes, allowing more pathing and fewer places to camp.

Moved the Defenders spawns in the first sector of Rush on Cape Helles.

Adjusted some problematic spawns in Conquest on Achi Baba, to avoid spawning in high traffic areas.

Fixed squad spawning on the final objective of Rush on Lupkow Pass.

Fixed some bugs related to players being disconnected while connecting to a game server.

Added an RSP option that allows removal of the delay that spectators experience so that things are witnessed as close to real time as possible.

Added a toggle to turn off/on the pre-round minimum of 6 players.

Fixed an issue that allowed the player to use some Pistol Carbines while swimming.

Improved inconsistent slowdown on steep hills. It now occurs on movement direction, instead of the direction you’re facing.

Slowdown will occur when climbing diagonally, as well as directly up/down a hill.

The game will no longer expose interlaced video modes in the PC video options. If you have previously experienced blurry output on PC due to the game running in a full screen interlaced mode, please re-select a mode in video options to update your profile settings to use a progressive display mode.

Fixed a bug where certain VFX would trigger when colliding with invisible geometry.

Fixed an issue with VOIP volume option not behaving as intended.

Fixed a bug where spectators would be kicked from the game if the last player left.

Removed some of the female Russian Scout spotting lines that mentioned German soldiers and vehicles.

Fixed an issue where Russian self-voice says “tank” when spotting a Scout soldier.

Fixed an issue where players occasionally encountered a loading loop the first time they tried to launch a Single Player level after playing through the Prologue.

Has your go-to class been ruined? Or are the changes welcome? Let us know!

In other Battlefield 1 news, YouTuber LevelCap shared his thoughts on EA manipulating the media, and all Operations are now accessible to all players with no Premium Pass requirement.