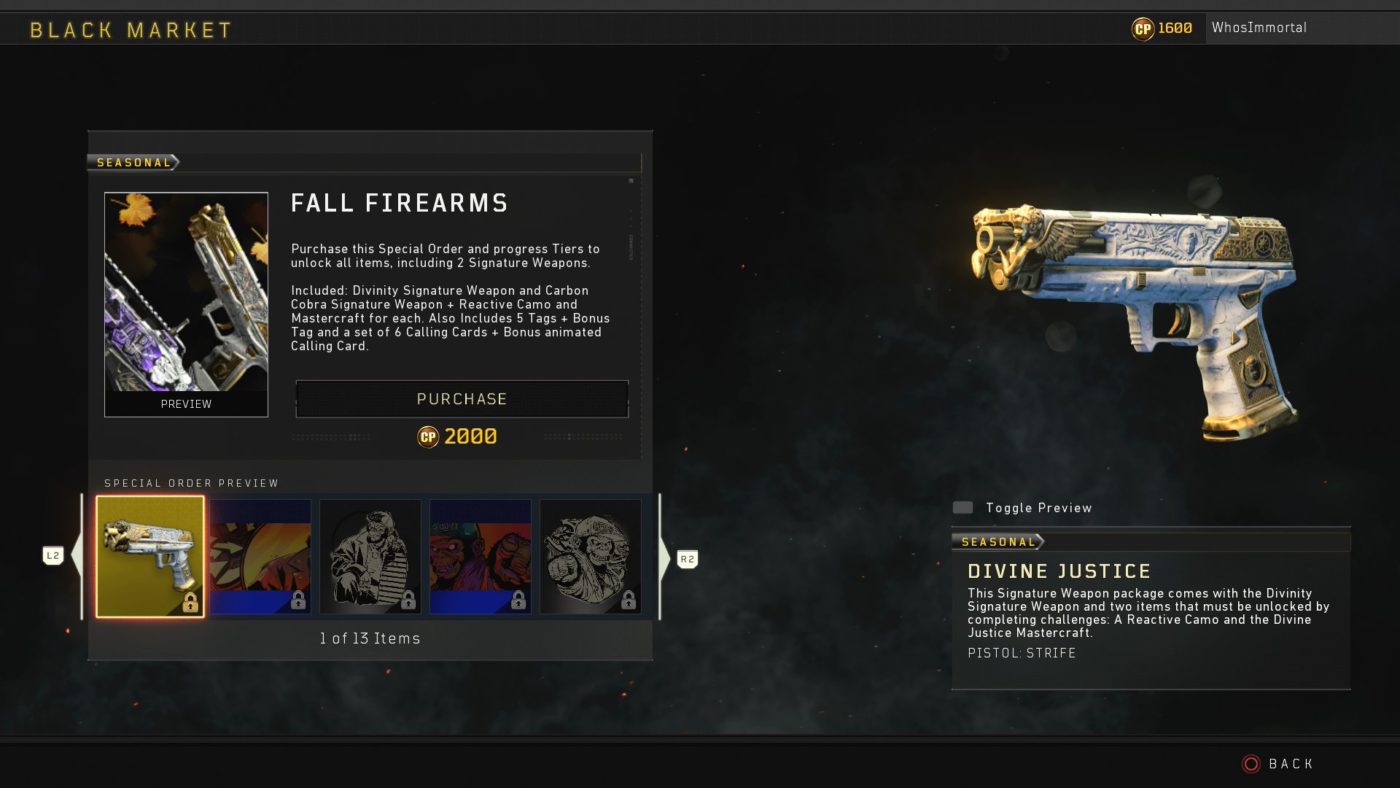 In case you didn’t know, Treyarch rolled out a new Call of Duty: Black Ops 4 title update earlier today. While the patch included a lot of game balance tweaks, bug fixes and the like, it also includes new items for the Black Market, which is where the Black Ops 4 microtransactions scheme of the game can be seen.

One of the new items in the Black Market is the “Fall Firearms” pack, which has two gun skins and a bunch of stickers and calling cards that can be used in-game, and is priced at 2,000 COD Points or $20 in real-world money. While $20 for two virtual cosmetic gun skins are kinda absurd enough in their own right, that’s not even the whole story. Purchasing the Fall Firearms gun pack will only grant you one of the two gun skins from the get go, with the other gun skin tucked away via the game’s dreaded “tier” system. Players will need to grind through 15 more tiers in order to get the second gun skin, which equates to roughly 50 minutes for each tier given that the Contraband stream given after each match isn’t connected to how well you perform, but based on time played. Doing the math, that means players will need to grin for close to 15 hours in order to complete the 15 tiers required to obtain the second gun skin they paid for. Or if you don’t want to do that, you can spend 100 COD Points ($1) in order to bypass a tier, and with 15 tiers to go through, that means another $15 out of pocket.

Needless to say, the Black Ops 4 community is livid given that people are asked to pay $20 in order to be able to obtain weapon skins.

Given how inevitable how some gamers will still buy the gun pack even at its ridiculous price and criteria, it’s no wonder Activision earns over $4 billion dollars a year on microtransactions alone.

Will Treyarch cave in like the studio has before where they adjusted the Black Market Contraband earn rate per match? We can’t say for now. Of course, some people will see this as unimportant given how it’s only gun customization and won’t affect gameplay,though not everyone feels that way. Which camp do you fall under? Share your thoughts in the comments below.

Call of Duty: Black Ops 4 Update 1.07 for November 20 Rolled Out, Here Are the Patch Notes

Latest Red Dead Redemption 2 Myths Include Pissing People Off With the Lasso & More, Check the List Out