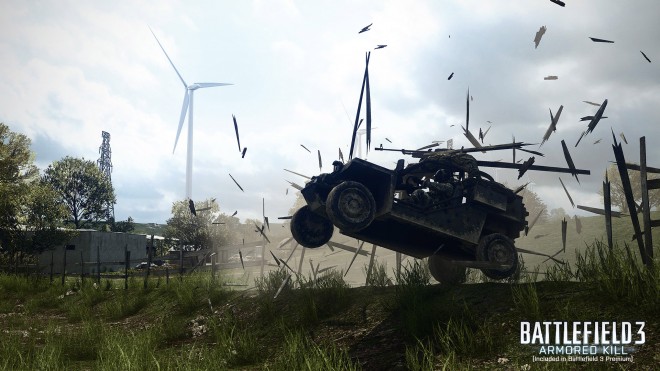 Yesterday, we got our first look at Tank Superiority, the new game mode available in the upcoming Battlefield 3: Armored Kill DLC, out this September. You can catch up on all the details here, if you missed it.

While the recent footage gave us a good glimpse of some Tank Superiority action on the new map Armored Shield, it still left a lot to be desired.

Luckily, GameSpot was able to provide a much better view of the kind of scenery you’ll be able to enjoy while cruising through the meadows of Armored Shield. That is, if you’re not being blasted by enemy tanks.

Details on DLC succeeding Armored Kill are being kept tightly sealed, other than initial Aftermath info. However, during EA’s Summer Showcase event, DICE lead designer Niklas Fegraeus stressed, “we’re talking motor-cycles,” when it comes to Battlefield 3’s fifth and final DLC End Game. We can speculate that much of the gameplay will involve two-man motorcycle teams – one backseat soldier providing cover fire while another handles the steering.

Additionally, the official Battlefield 3 Twitter handle was able to confirm one fan’s inquiry regarding weapon DLC, stating “the December release [Aftermath] and March release [End Game] will include new weapons.” While some promotional material listed new weapons in Aftermath, others did not include a mention. Other than this tweet, no further details have been given regarding End Game.

Thanks, Mckinnon and Jonas, for the tips!