Microsoft has finally announced the tech behind their much anticipated console, Scorpio.

Digital Foundry got an exclusive hands-on look at the Project Scorpio, which you can watch in the video above. The console will feature a ramp up GPU, overclocked and custom CPU, along with an increase in RAM. Digital Foundry overall impression was extremely positive, and it seems that they were especially impressed with how well Forza ran at 60FPS with a native 4K resolution. While newer titles that will be released will most likely take full advantage of what the Scorpio has to offer, good news as come for older titles as they will also benefit from a performance increase with the updated specs, no patch required.  No price was given for the console, though we can expect to hear more about it at this year’s E3.

To give you an idea where it stands spec wise, a comparison chart between the Xbox One and PS4 Pro is available below. 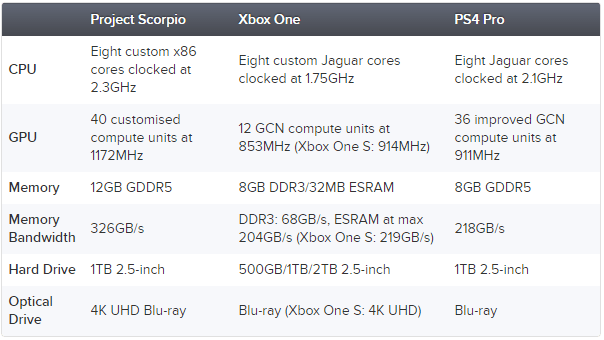 We will be sure to cover it more as more details surface.