Rumor: Marvel’s Avengers Will Feature Spider-Man as a Playable Character, But Only on PS4

With Crystal Dynamics already announcing that Hawkeye will be the first hero we’ll see post-launch for Marvel’s Avengers, some might be wondering whether we’ll see everyone’s favorite wallcrawler in the game. If this recent advert from a UK retailer is to be believed, Spider-Man will indeed be part of the roster, but only on PS4.

The ad came from UK retailer Base, which featured text that mentioned “Play as Spider-Man exclusively on PS4.” Check out the captured image below (via PSU): 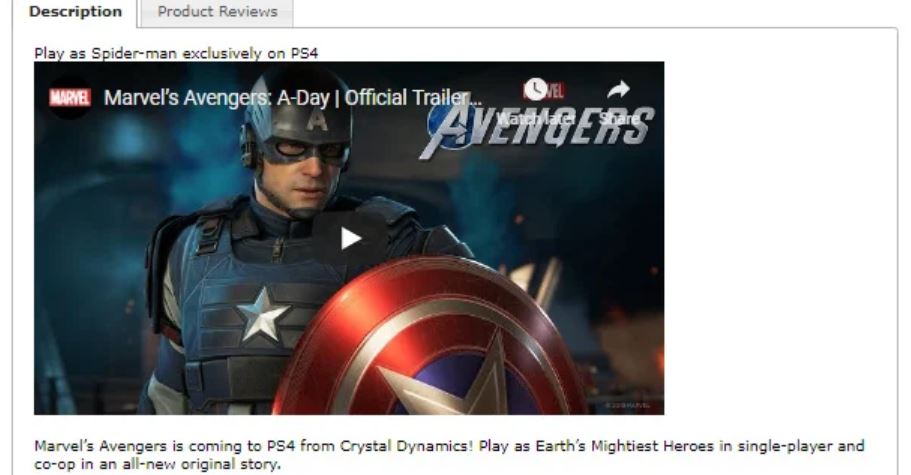 What’s weird here is, the mention of Spider-Man appearing in Marvel’s Avengers has been pulled entirely. Could this be a premature announcement? Perhaps an error by the retailer? We’ve contacted Square Enix to ask for clarification about this. Note that this is a rumor until confirmed or denied by Square Enix, and as such, should be taken with a grain of salt.

While withholding a very popular character for one platform might be a bit too much, note that Square Enix does have a marketing deal with Sony regarding Marvel’s Avengers. One advantage of this deal is that PS4 gamers will see the Marvel’s Avengers beta a bit earlier than Xbox One and PC gamers. Also, Sony owns the film rights to Spider-Man, and Sony’s first-party studio Insomniac Games also released Marvel’s Spider-Man exclusively on PS4 in 2018, so if this turns out to be true, don’t be that surprised.

If this is indeed legit, PS5 gamers should expect webhead appear on that platform as well, as the game has been confirmed for next-gen platforms as a free upgrade.

In other Marvel’s Avengers news, don’t forget to check out the beta gameplay walkthrough overview to see what we should expect soon.