On Twitter, developer Sledgehammer Games tweeted out this image, confirming that a new Royalty class of weapons is indeed coming to Call of Duty: Advanced Warfare, along with new non-Akimbo variants of the SAC3 sub-machine gun. 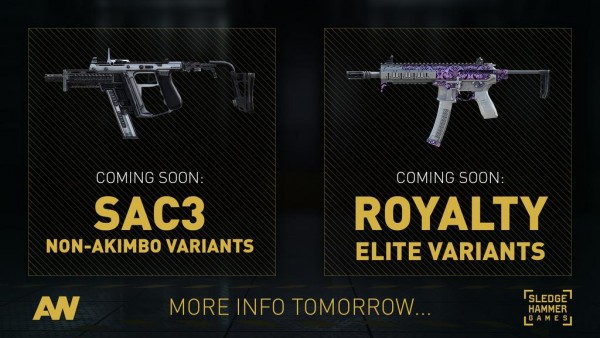 Reports suggest that a new ‘Royalty’ class of weapons is coming to Call of Duty: Advanced Warfare in the near future.

These weapons, 12 in total according data-mined files found within the PC version of the game, will be painted in the same Royalty camo that was introduced with Advanced Warfare’s new Grand Master Prestige Gear last March.

Have a look at the 12 new ‘Royalty’ weapons, including their alleged stats, below:

Stats and chart courtesy of the Denkirson forums and DidUknowiPwn of Reddit.

According to KDizzle340, most of the stats match up with these currently existing Elite weapons:

Currently, it’s not known how these new ‘Royalty’ weapons can be attained, but with the hints Sledgehammer Games Studio Head Michael Condrey has been tweeting as of late, we’re certain we’ll hear all about it soon.