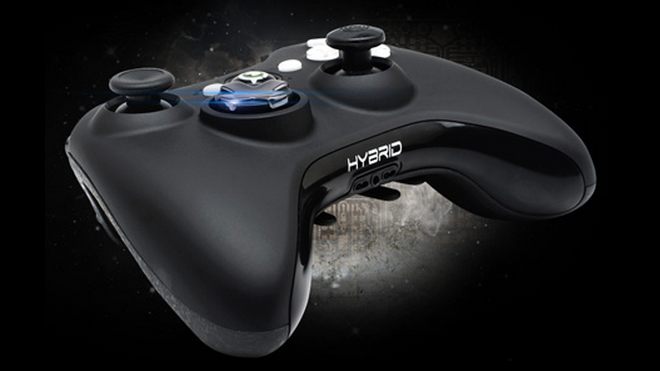 SCUF Gaming Introduces the “SCUF Hybrid” For The Xbox 360

SCUF Gaming, who are known for their line of modified Xbox 360 and PlayStation 3 controllers that cater to first-person and third-person shooter games like Call of Duty, Halo, Battlefield, and Gears of War, are introducing an entirely new line of controllers that improves upon the original design called the SCUF Hybrid.

The SCUF Hybrid is a redesigned Xbox 360 controller that “combines the familiarity of the XBOX controller with a completely re-engineered SCUF back that locks the hands in place by offering the best shape for paddle usage in either wired or wireless variations.”

Up to this point, all Xbox 360 SCUF controllers have been based on the first-party Microsoft design but with the addition of new buttons, improved thumb sticks, trigger stoppers and back paddles for extra functionality. The SCUF Hybrid pushes things even further by opting for a more efficient design, a new battery pack, and additional paddles.

It boasts “One touch fully remappable paddles for on the fly customization with a new virtually indestructible 2, 3 or 4 paddle design! A Lithium Ion battery has made the wireless version lighter and more versatile while offering days of gameplay on a single charge. The SCUF back also improves overall durability with higher grade materials, paddle housings, and hair trigger guards. The HYBRID is designed to dramatically improve all aspects of your gameplay and enable you to become the best gamer you can be.”

Check out the promotional video for the new SCUF Hybrid.

The SCUF Hybrid will be available later this month on July 31st, 2013. You can pre-order and customize your very own SCUF Hybrid right here, or even choose designs from some of your favorite pro teams.

Are you a SCUF user? Are you thinking about picking up the new SCUF Hybrid?