Sony Interactive Entertainment is at it again with innovative technology and AI-powered experiences that can change the game development industry of today. The video game and entertainment company has filed a patent of an AI that can build interior environments from generated exterior data that resembles requested real-world locations.

According to the documents submitted and made available on Patentscope, the technology uses AI to request and initiate gameplay, which generates an environment from a real-world location. The model learns from the exteriors of structures, such as houses or buildings, generated by the machine and automatically uses these objects’ descriptions to create the interiors.

Three-dimensional (3D) maps of real-world locations provide an engaging way to explore regions of the real world. However, while such 3D maps afford views of the exteriors of buildings and other objects at real-world locations, they generally do not capture the interiors of such objects, as they are principally constructed based on external views captured from public places or other lawful locations. 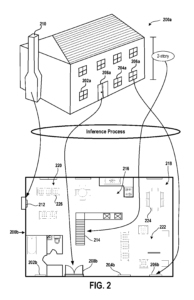 The technology emphasizes the development of cloud gaming by Sony as it continues to research and develop the technology further.

A continuing trend in the video game industry is the increased sophistication of graphics and the availability of computing resources to meet the demands of modem game engines. As video games evolve, their resolutions and frame rates continue to increase, enabling rendering of very realistic and detailed virtual environments.

The patented was filed on October 23, 2020, and recently published on April 29, 2021, and was invented by Warren Benedetto, Director of Product Management for Sony.

Same as in every patent a company files, there is no guarantee that this will see the light of day, or be implemented in any gaming device –much less the PS5. That said, don’t be surprised if we do see it in the future. I mean, this does seem like something we can see in the new VR headset Sony is cooking up.