Despite the PlayStation 5 impressive SSD speeds, it would appear that Sony is looking into ways to further increase the boot time to play games, as the latest in PlayStation patents reveals custom game templates that will launch games directly into gameplay.

Update: Quick update because I’ve been seeing some confusion. Don’t mistake this with games giving you the option to launch in either Singleplayer or multiplayer as that has been something that has existed for a long time now. Instead, look at it like this, you create a template so when you launch the game you are immediately in matchmaking, not just the multiplayer menu, but in a queue to find a lobby. There are tons more ways this can be applied, but don’t look at this as simply the option to launch the game in either singleplayer or multiplayer.

According to the patent (spotted by Roxanne), which was filed over a year and a half ago (only recently went public), Sony is looking at ways to utilize the functions found in SSDs and other hardware components as it details the ability to boot directly into specific sections of games.

Presently available ways for users to begin gameplay may include steps, such as signing into a platform, selecting a game title, signing into the game, selecting one or more options on a menu, joining co-players for a multi-player session, selecting a stage, etc. Each step may be associated with different user interfaces.

The user interfaces used in digital games may also display information about the user, peers, and gameplay by the user and/or peers. Presently available user interfaces for displaying the user gameplay data may include displaying a string text and/or a specific achievement (e.g., a trophy) provided by each game.

Due to its usage in numerous aspects of digital content interaction, user interfaces can have significant impact on user experience. Such interfaces may, for example, detract from the user experience when gameplay information and statistics are not displayed or poorly displayed. Further, such interfaces may increase the time and amount of operations or steps a user must take to launch and play a selected portion of a game, and may thereby frustrate or inconvenience a user trying to launch a game.

There is, therefore, a need in the art for systems and methods for launching direct gameplay and providing a dynamic interface.

These are all programmable according to the patent, with users being able to store multiple templates. What exactly does this mean? Well, think about this. If you are playing a single-player game, you no longer have to wait to go through all the functions of selecting the menus and loading a save, when it can be done all automatically. This even more so with multiplayer. Using Call of Duty: Black Ops 4 as an example, instead of booting into the game, having to select a specific mode (Zombies, multiplayer, the modes, etc.) you can theoretically boot directly into Zombie mode, or into matchmaking as soon as you start the game. Pretty cool, right?

Embodiments of the present invention include systems and methods for launching direct gameplay and providing dynamic interfaces. A template of an interactive content title may be associated with an activity of the title. The template may be transmitted to and displayed on a user device. The user can select the template, which may then launch the activity associated with the template within the title and generate an object to capture and store data related to the activity. Data from the object can be displayed in real-time to show a current progress of the user participating in the activity. After completion of the activity, the activity can be displayed as a re-playable activity, and data gathered during the activity can be used to dynamically update a user profile, display activity history, or predict future templates and/or activities with which the user is likely to interact.

In step 210, one or more templates are stored in memory in the platform servers 120 and/or interactive content source servers 110 in association with a corresponding one or more activities of an interactive content title. Each activity may be a progress type, where the user or a group of users completes a single or multiple discrete actions (e.g., one or more quests within a game); an open-ended type, where the player or group of players has no given task to complete (e.g., an open world game where users build objects or explore a gaming world); or a competitive type, where at least two players cooperatively or competitively participate in an activity, and a result is captured (e.g., a head to head match or a team versus boss match). Each template may directly link to the portion of the content title where the user can begin the activity within the title or begin a matchmaking process which matches the user to a competitive match. Such link may, for example, allow the user to skip navigational steps conventionally required to begin interacting with a specific portion of a title or to enter a competitive activity, such that the user simply selects the desired template and immediately begin interacting with the title or is immediately entered into matchmaking. For competitive type templates or templates for multi-player interactions, the templates may include information such as number of players that can participate in the interactive content, number of players per party/team, prizes available, and time limits. 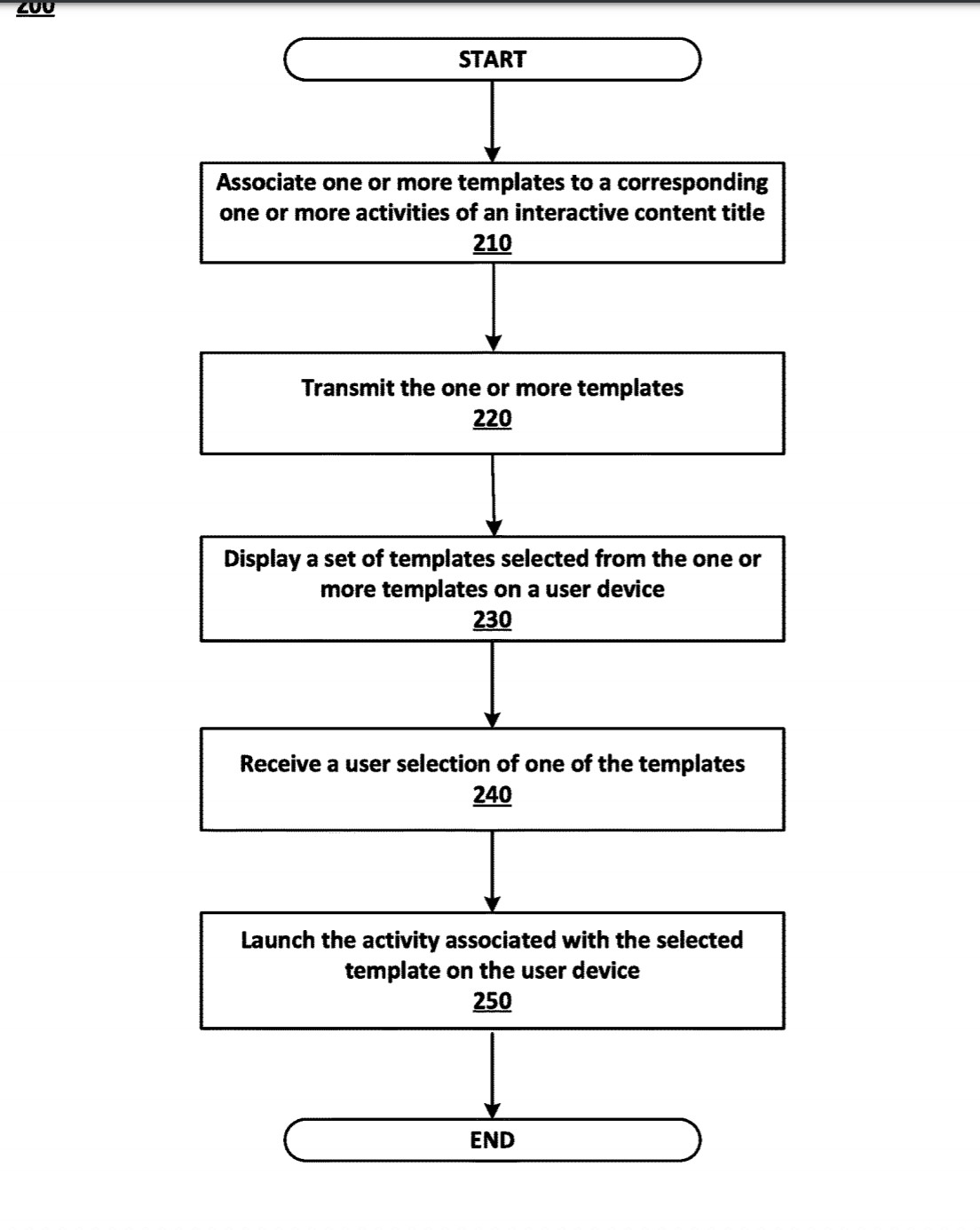 What is also interesting is that it appears to offer even more functions than just that as the patent discusses teleporting users to specific areas, or matchmaking options such as by skills, player count, etc.

Twitter user and known in the PlayStation hacking scene, Roxanne took to replying to our thoughts on it, offering a possible insight as to how this may be actually used.

What I heard from my sources was that the OS itself can display several tasks or in-game achievements you have still to finish. The advantage they plan is that „you can see what you will need to do in-game“ but without needing to start the game at all, kinda like a „What’s Next“.

That would certainly line-up with the initial description stating that Trophy data could be some of the information displayed on the dynamic interface. Of course, we aren’t sure if this will be added to the PlayStation 5, but the patent itself has existed for a while now, with it only going public last Thursday.

What do you guys think, does this sound like a feature you can foresee yourself using if it becomes available? I know I certainly can see myself using it.