While there’s already a rather big Star Wars Battlefront 2 patch dropping later today/tomorrow, there’s yet another one set for release later this month to coincide with the latest Star Wars film, Star Wars: The Rise of Skywalker. In a press release, DICE announced the Battlefront 2 Rise of the Skywalker release date for December 17! Not only that, but there’s also a new Battlefront 2 edition called the “Celebration Edition” launching tomorrow.

This patch will introduce a brand-new planet, which will be available in the game’s co-op mode in December where players can play either the Resistance or the First Order. This new planet will also be available for the Heroes vs. Villains mode.

New Reinforcements are coming with the Resistance and First Order both getting two new ones.

Sith Trooper – Merciless trooper excelling in speed and advanced weaponry to hunt down and destroy anyone that stands in their way.

Jet Trooper – .Achieve aerial superiority over the Resistance by using your grenade-attachment enhanced blaster rifle as you dodge, hover and maneuver through the air.

The Gunner and Spy unit will be available for the Resistance, and these two will be new alien species that will be shown in The Rise of Skywalker.

Joining these new Reinforcements are new appearances for Rey, Finn and Kylo Ren. As one might expect, their appearances will be based on The Rise of the Skywalker movie, and wil be available for purchase via Crystals and Credits (or if you own the Celebration Ediition).

As for the co-op mode, players can expect the Sequel Trilogy to arrive in the mode across the following maps:  Jakku, Takodana, Starkiller Base and a new Star Wars: The Rise of Skywalker inspired planet.

Got that? Good. For those who haven’t bought Battlefront 2 yet, you might want to jump in now. DICE is releasing the Star Wars Battlefront II – Celebration Edition, which will retail for $39.99, and those who already own the game can upgrade to it for $24.99. Members of Origin Access Premier, the Celebration Edition will be part of your on-going subscription, so there’s that.

So what’s included in the Celebration Edition? Check it out below. 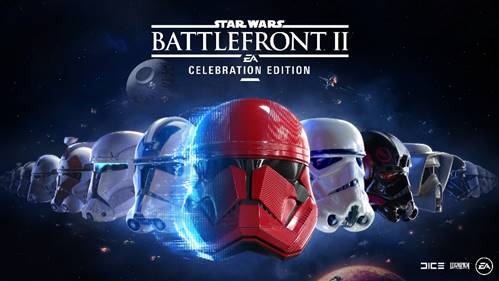 Note that the Celebration Edition will include instant access to every Hero appearance, Trooper apperance, emote, voice line, and victory pose that’s in Battlefront 2 that can be obtained via Credits or Crystals.

The Star Wars Battlefront II – Celebration Edition will be out tomorrow (December 5) as a digital download on the PS4, Xbox One, and PC.