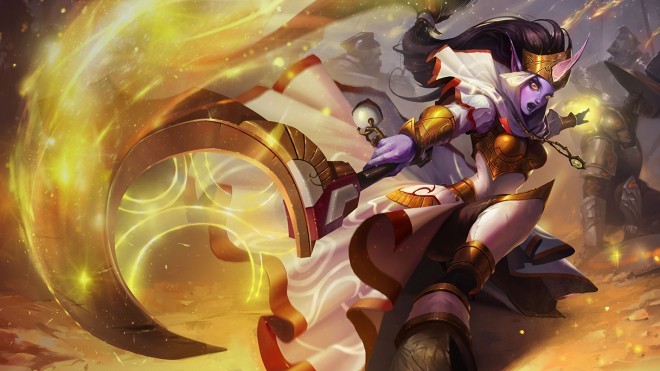 A new patch for League of Legends, which is basically a balance update from the last patch, is about to be applied to the League of Legends servers. However, since it’s a balance update patch, there’s no news about when Howling Abyss or Lissandra, the recently announced champion, will come out. Here are the changes for the upcoming patch, with explanations about why these changes were made.

As an assassin, Akali should be a champion with high risk and high reward. These changes increase her early game risk while retaining her later game potential.

These changes to Karma include several quality of life improvements and enhance her ability to generate multiple Mantras in well-executed fights.

Previous to these changes, Kayle’s support spells could often be cast completely off-screen from her opponents. With these reduced ranges, it should be easier for opponents to anticipate her presence in fights.

On top of her long range and wide array of defensive utility, Lux was also among the fastest ranged champions in the game. These changes force Lux to be more mindful of her timing and positioning as opponents now have more opportunities to capitalize on her mistakes.

Volibear was both an extremely powerful duelist as well as an almost guaranteed initiator for early skirmishes. In order to preserve his presence as a threatening fighter, these changes instead reduce Volibear’s ability to force engagements early on.

The patch will be deployed April 10 and it will take approximately 6 hours for maintenance. As always, the League of Legends servers will be unavailable at this time (Ranked Queue will be disabled 00:30 PST while the servers will shutdown 2:00 PST) until the patch goes live.

On another note, since the LCS is about to enter mid-season, there will be All-Stars international matches to determine which region gets a third spot to go to the Season 3 World finals. Viewers are the ones who decide who gets the chance to go to China and fight for their countries by voting for their favourites. You can vote for both NA and EU teams while Asian teams will be determined by other ways.