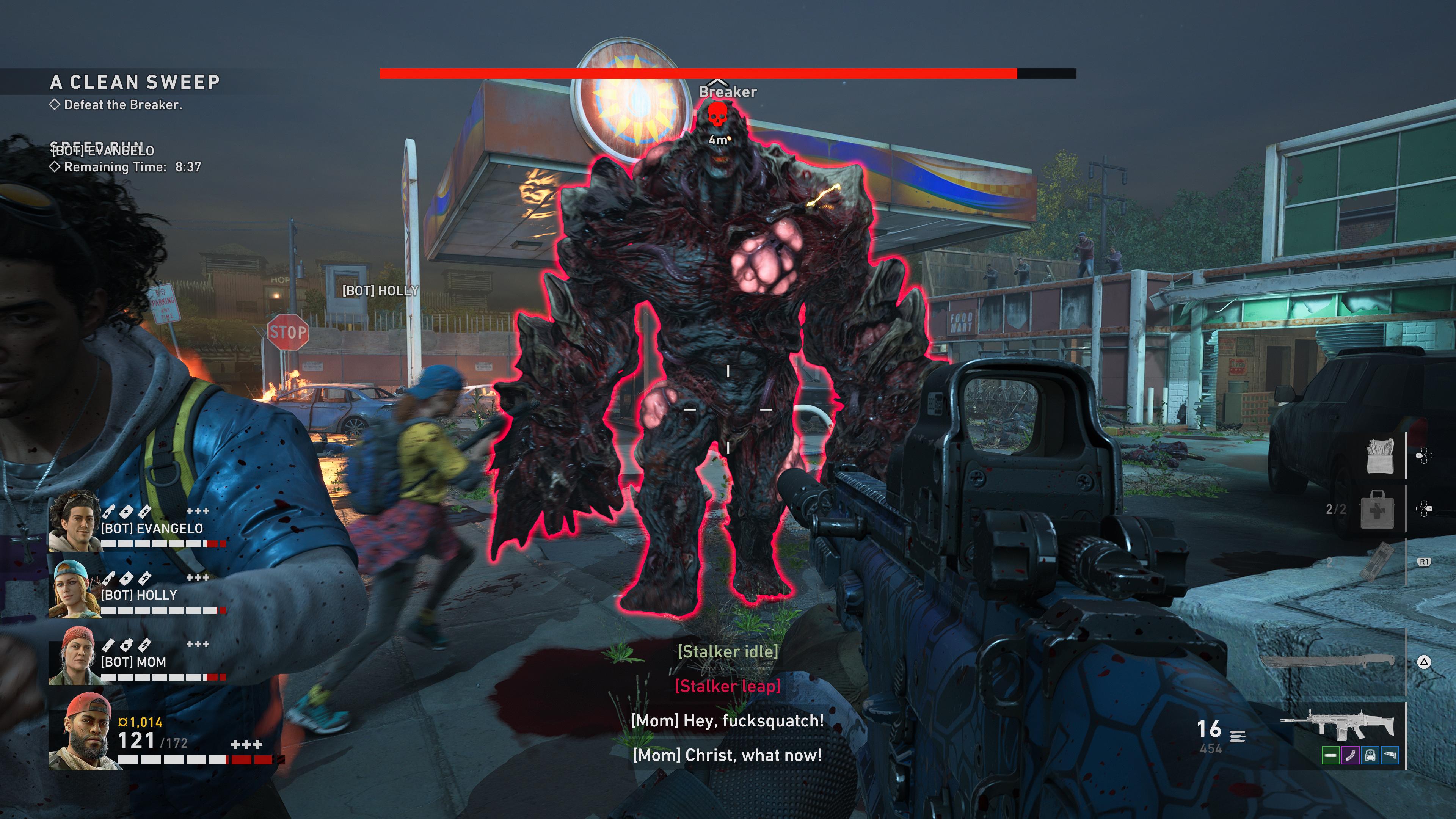 One time playing Left 4 Dead Versus mode on the Dead Air campaign, I was down to a sliver of health, my screen was black and white meaning the next time I take damage I’m dead for good. As I hobbled to the safe room, respite and a chance to heal my character (I always played Bill because he was the old man that smoked cigarettes) my friend, playing Louis, was right behind me watching my back to make sure I made it. Right as I entered the safe room, a player using a Hunter pounced on me. Certain I was dead, I nearly let go of my controller, but my friend managed to get a shot off instantly killing the Hunter before it could do any damage to me, and we closed the door behind us, making the two of us the only survivors, and thus winning the match.

I’ll say it plainly: I absolutely love Left 4 Dead. I love the characters, the design, the special infected, the maps, everything. Countless hours were spent playing with friends and some of the best, most intense multiplayer moments I’ve ever had — like the anecdote above — were in that game.

Left 4 Dead 2, while good as well, just didn’t feel the same without Turtle Rock Studios at the helm. So when Back 4 Blood was announced, clearly as a spiritual successor to what Turtle Rock created, I was eagerly anticipating it, but could Turtle Rock recapture the magic of their 2008 game? Well, the time has finally come, and Back 4 Blood is out, and the answer is a lot of “yes,” and a little bit of “no.” 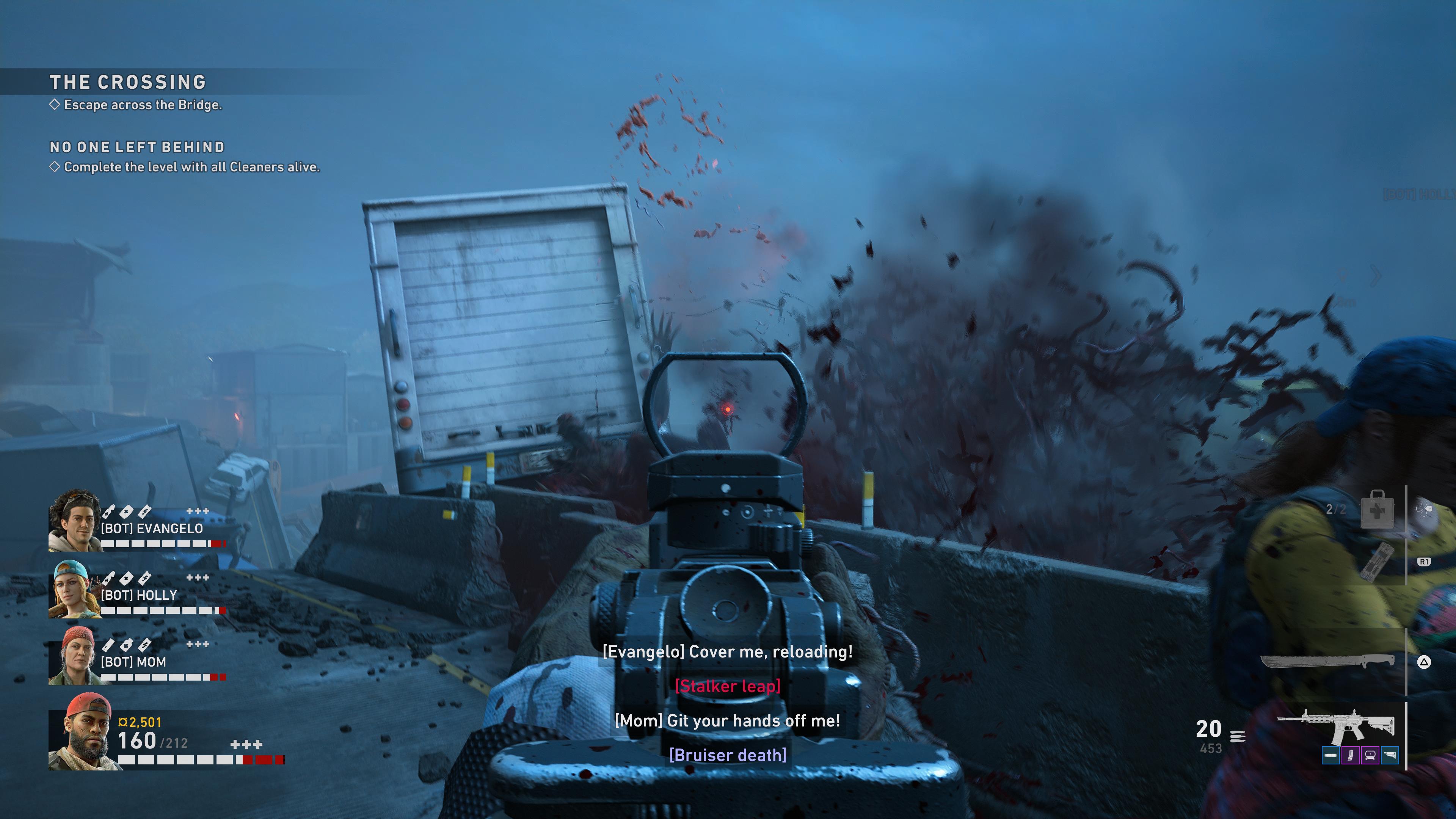 The basic template of Left 4 Dead is clearly here: players take on the role of four survivors as they make their way from safe room to safe room across four acts, killing zombies (here called “The Ridden” as opposed to the “Infected” in Left 4 Dead) and “Special Ridden” (essentially “Special Infected” from Left 4 Dead), while accomplishing tasks and and making a final stand as waves of Ridden and Special Ridden attack before getting rescued. There’s an AI Director that assesses how the players are doing, and throws enemies at the players in different sequences throughout, making each run unique. As a veteran player of Left 4 Dead (and Left 4 Dead 2) this immediately made me feel at home playing the game.

There are some new wrinkles thrown in such as a stamina bar that depletes as you run and swing your melee weapon. Safe rooms also have a store you can use gold coins found throughout the levels to purchase attachments for the weapons that give boosts to certain stats, med kits, ordinance-like pipe bombs, grenades and molotov cocktails, team boosts that give the team more stamina, more health, etc. Additionally, unlike Left 4 Dead and Left 4 Dead 2, each Cleaner (Survivors in the L4D games) has special skills and stats, strength and weaknesses. For example, Karlee can see nearby hazards through walls (they’re in red), has a +1 Quick Inventory slot and gives the team a +25% use speed (meaning using medkits, opening crates, etc is faster). Hoffman spawns ammo with kills, has faster stamina regeneration, and gives the team a 5% movement speed boost. I came away liking Karlee the best for her ability to see hazards, including Sleepers which are ridden that spring from nests on the wall and pin you down. Before using Karlee I would fall for these traps 9 out of 10 times. After using her I was able to sneak up on them and take them out before anyone got attacked by them.

Know When to Hold ’em

What sets Back 4 Blood apart and truly makes it a new experience is the addition of Cards. Cards offer buffs, many with positive effects, some with positive and negative effects, that can be purchased and added to a deck, Between safe rooms players will choose cards to add to their run. Some offer more ammo, others offer a boost to stamina, some add health. Other cards give special traits like melee kills add 2 health. As you progress through your run, the cards can be added and some cards stack on top of each other instead of taking up a slot. For instance I can stack two stamina cards on top of each other, and not have two stamina cards take up two slots. This makes you more efficient and powerful over the course of a run as the difficulty ramps up. You can buy more cards back at base camp, and either add them to an existing deck or create a new deck. At the start of the next run you will need to select a deck to use and that’s your deck for the remainder of the run. Strategy is key in selecting which cards should go into which deck.

The AI Director also has its own deck to choose from in the form of “Corruption Cards” which add some element to the game. It can be anything from adding more flocks of birds which when disturbed they make a ton of noise that attracts a horde to adding a thick fog that makes it hard to see threats beyond a certain point, to giving certain Special Ridden more health, to making every locked door alarmed so breaking them brings in a horde and so on. They can really make the run incredibly challenging, especially on higher difficulties.

The game is broken up into four acts, with various chapters in between, each with a varied number of “starting points.’ Some chapters will have four starting points (safe rooms), others can have two or three. Some acts have more chapters than others, meaning you will never deal with the same structure over the course of the four acts like you did in Left 4 Dead. In Act 1 you make your way through a countryside and smaller parts of town buildings completing various tasks. While I have yet to confirm this, how many players are in your party as opposed to bots, will dictate what it is you have to do on the map. What I can confirm is that the game will take you through areas you’ve already been through, but will have a different path that was previously blocked off or will have you do different objectives which keep the areas fresh. Though I do look forward to what new maps they include in the planned DLC.

Another new addition is, unlike Left 4 Dead, if the team wipes you would simply spawn back in the last safe room you visited and replay the next map, Back 4 Blood has continues. If have continues remaining, and your team wipes or you can use a continue to respawn in the last safe room. If you run out of continues you will have to start back at the first safe room of that chapter of the act meaning you might have to run the entire chapter again, depending on how far you’ve gotten. It can be really frustrating to have to redo large chapters and instances of the game you’ve already completed, so it’s best to work together as best you can to make sure you at least make it to a new chapter.

There are also Supply Lines which offer new cards for your decks as well as customization options. These are purchased with Supply Points which are earned by completing the chapters. The higher the difficulty, the more Supply Points you will earn.

All of these features make an already fun base game into something with variety and replay value that even Left 4 Dead 1 and 2 lacked. 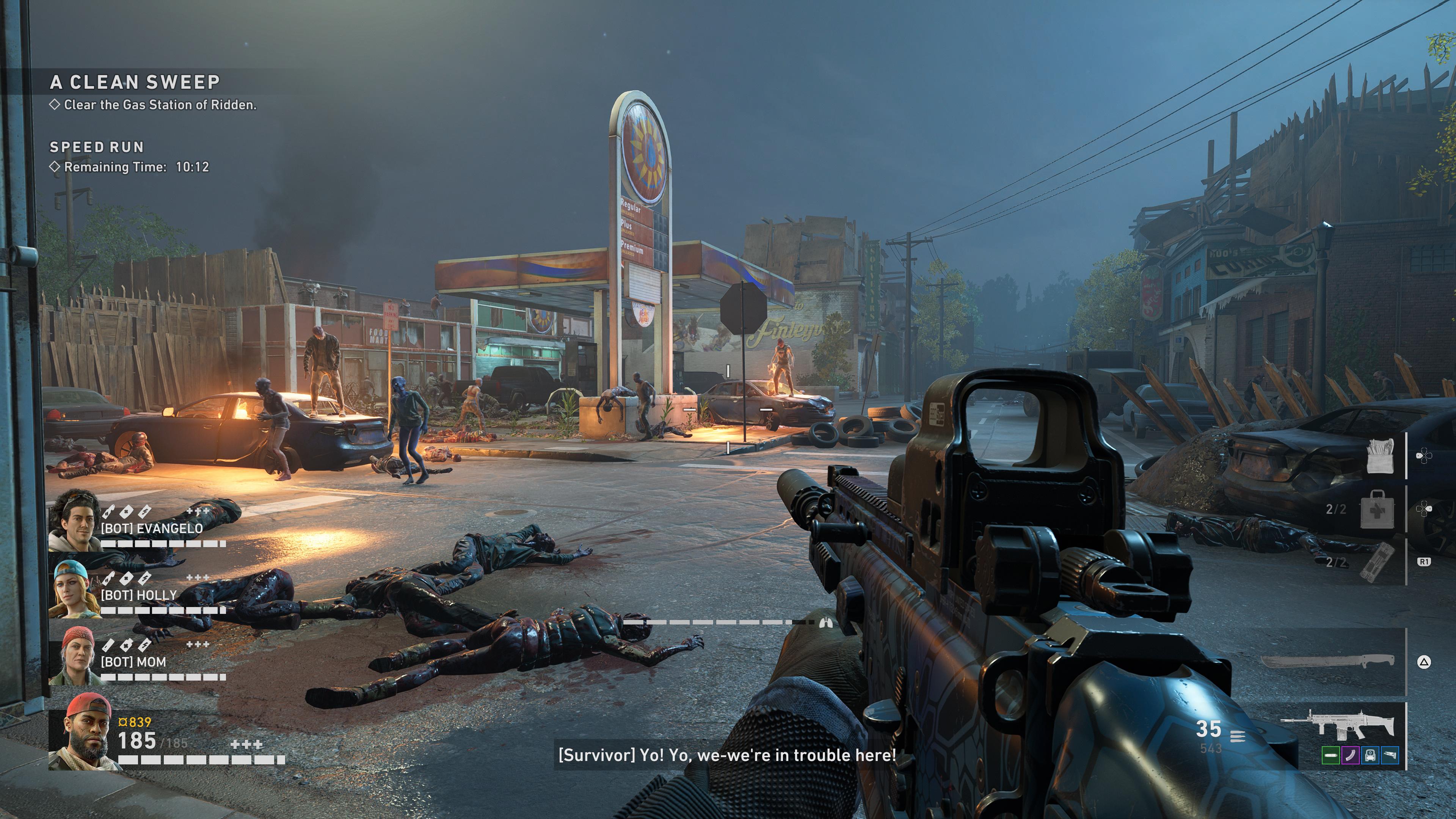 No Witch, No Cry

It’s unfortunate, however, that while Back 4 Blood does add enough new systems and elements to make it a worthy follow up to one of my favorite games of all-time, it does falter in some places that are somewhat surprising. First of all, the Mutation. Whereas in Left 4 Dead each of the Special Infected felt unique, and had their own character and abilities that could really mess things up for players, the ones offered in Back 4 Blood don’t have the same unique, identifiable and damaging characteristics and abilities, and they all look pretty similar in their outward appearance and color making them less special than what Turtle Rock came up with in 2008. It’s easy to see their Left 4 Dead analogs, and at first I was hard pressed to call them by their Back 4 Blood names. So instead of a Hocker I would call out a “Smoker” since they like to sit back and spit something from their mouth pinning you in place, doing damage over time. Though it’s not as interesting as getting wrapped in a Smoker’s tongue and pulled back towards the Smoker. There are also analogs for the Boomer as well as well as Hunters. The two truly missing are the Witch and the Tank. So far I have yet to encounter one Mutation that inspires as much anxiety as The Tank’s’ music hitting, knowing you had to deal with the massive damage dealing, bullet sponge enemy that would almost always show up at the most inopportune time.

There are three variants of each Special Ridden that each do more damage and have more abilities. I’m sure as the campaign progresses these will get more dangerous but at first blush most of my encounters felt like they were easily dealt with. They become far more of a threat when you have to deal with a horde of common Ridden as well which can pull your attention from them while they attack. Nothing I’ve experienced in Back 4 Blood put me on edge like the cries of the Witch that when angered would hunt you down until it incapacitated you with one hit and then mauled you to death with its long talon-like nails. In short, none of the Special Ridden here feel like more than a nuisance.

This time around Turtle Rock have added bosses that are massive enemies with huge health bars. At first they can seem intimidating because they have a long reach, can do a ton of damage, and if you’re not careful, can leave you helpless on the floor. Unfortunately (or fortunately – depending on your point of view) they’re also dumb as rocks and can easily be stuck on the geometry which makes them much easier to deal with. The hardest one is the one you face throughout act 4 – which is only one chapter- and it definitely wipe out your team, even on Recruit.

It’s unfortunate that Back 4 Blood does lack some of the personality of Left 4 Dead but I can safely say that Back 4 Blood is nearly everything I wanted in a Left 4 Dead 3 and then some. Hopefully, over time, Turtle Rock will be able to fix the issues that are present and maybe add in more harrowing Infected, erm, Ridden.

A Back 4 Blood review code was provided by the publisher. Game tested on PS5. You can read SP1st and MP1st’s review and scoring policy right here