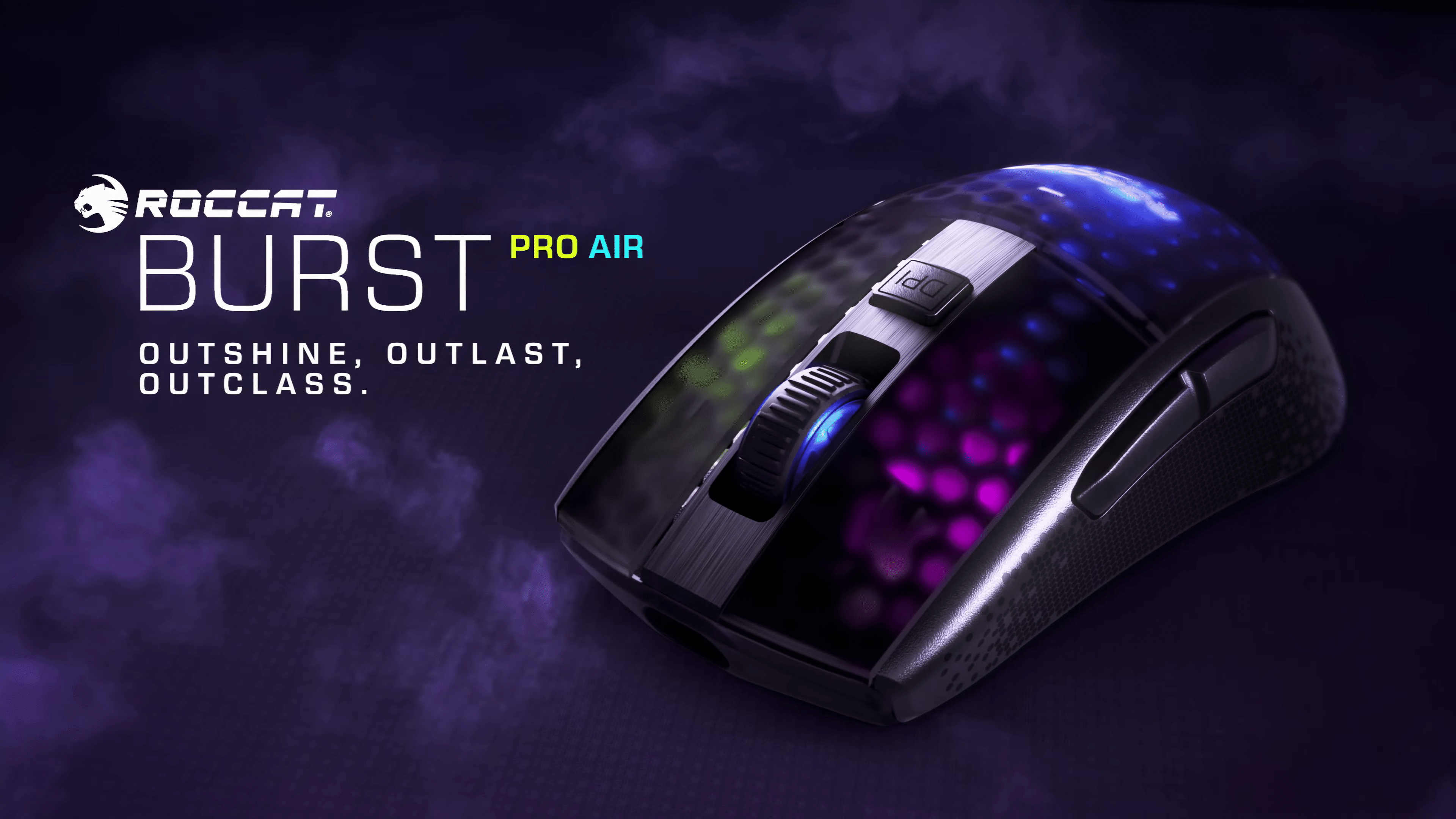 Making an impressive debut last year, Roccat is back with yet another exciting new iteration to their newest line of gaming mice, the Burst Pro. Dubbed as the Burst Pro Air, a wireless alternative of their stellar Burst Pro, Roccat is once again setting its sights at delivering uncompromised performance, at a fair, and affordable price. Here’s the MP1st Roccat Burst Pro Air review.

Back when I reviewed the Roccat Burst Pro, one of my many praises was how simple, yet beautiful the design was. It had a sleek modern look with a not-so-flashy, but gorgeous application of RGB lighting. The mouse itself was — and still is — extremely comfortable to use, and since its initial release last year, it’s been my go-to gaming mouse that I have used every day. 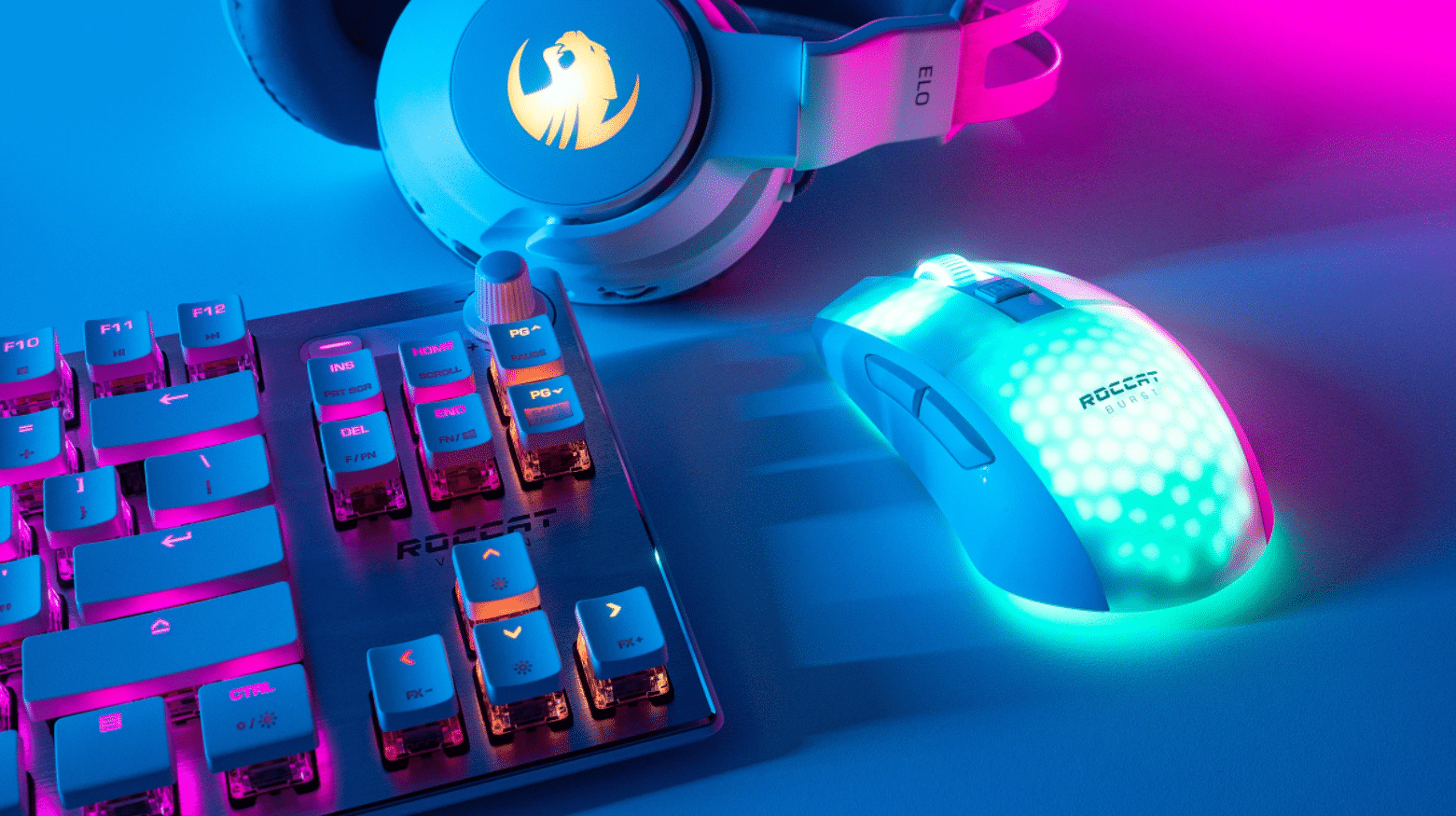 Honestly, it’s been a damn near perfect gaming mouse since I got it — one I felt that Roccat couldn’t possibly improve on. Well, that was the case until I got my hands on the wireless variant of this mouse, the Roccat Burst Pro Air.

While the Burst Pro Air maintains much of the original design of the Burst Pro, there are some changes, one being the obvious wireless connectivity. Using either Bluetooth (5.2), or the 2.4GHz dongle that comes with it, users can enjoy lightning fast responsiveness without the need of a wire running from their PC. It’s complete freedom, which is great for those looking for a way to better their cable management on their builds.

Looking a bit closer at the Burst Pro Air, there are some additional changes that may not be so obvious to the eye. Take the transparent honeycomb shell. On the original Burst Pro, the RGB would shine through it in a beautiful-yet-non-flashy-nor-distracting way. It had just enough brightness to give it that style with a special touch. That still holds true on the Burst Pro Air, but now the honeycomb and RGB lighting extend further into the left and right clicker where before they came up just a tad short of those buttons. It’s not a major change mind you, but a welcomed one nonetheless.

Underneath the mouse there are the switches to go between the different forms of connectivity, as well as the PTFE glides which I believe, may be the same as previous iterations. However, the underneath portion of those glides and around it has been changed to have the transparent honeycomb design. Before it was just solid plastic with some odd square. It doesn’t sound like a big change, but when you look at both the Burst Pro and Burst Pro Air it’s a little evident as you can now see some glow coming from underneath it. You can see it in the picture above.

It’s a small, but very nice change that adds more “pop” to the Burst Pro Air in such a simple, yet not overly flashy way.

All in all, while not the most drastic of changes (outside of being wireless, of course,) these do add up for what I consider to be a great quality of life improvement over the wired variant. For a gaming mouse that I already had nothing but high praise for, the Roccat Burst Pro Air will certainly be the standout mouse you might just be looking for when it comes to style, and of course, comfortability. But what of the actual performance? How does it stack up against other gaming mice, yet alone its predecessor?

For the sensor, the Burst Pro Air is once again using Roccat’s state of the art optical sensor, the Owl-Eye. However, where the Burst Pro featured a 1600 DPI sensor, the Burst Pro Air features a 1900 DPI sensor, the same found in the excellent Kone Pro line that launched after the Burst. But what exactly does that even mean in terms of real-world use? Well, it means you can enjoy PC gaming with zero compromises as the Owl-Eye sensor allows 1:1 accuracy. You move, it moves, no delays, no sluggishness. It’s fast, and responsive and for those who are massive fans of the first-person shooter genre, it’s exactly what you want — a mouse that can keep up with those fast twitch reactions. It feels great, and I can honestly say the difference between the Burst Pro Air and other gaming mice is a noticeable one; enough to say it makes a world of a difference.

What’s more, much like many of Roccat recent PC hardware offerings, the Burst Pro Air also features their groundbreaking innovating Titan Optical Switch. For those out of the know, the Titan is an optical switch that uses light rather than a physical form of contact to register presses. This translates to clicks that are snappier and more responsive over mechanical mice, as well as less wear and tear on the hardware itself. The presses are immediately felt on the Burst Pro Air, almost as if they are pressed before you even press the key yourself. It sounds crazy, but that’s how damn responsive it feels.

As for the wear and tear part, having spent time with the Burst Pro (wired) I can comfortably stand by that statement of longer lasting hardware. A year+ of daily extensive use, my Burst Pro is still holding up strong with no signs of buttons sticking. I’m surprised as usually I find myself dealing with mouse trouble right around the year mark for how heavy of a PC user I am, yet alone competitive in the FPS genre. I’m excited to see how the Burst Pro Air holds up in that time, but undoubtedly, my level of confidence in this mouse is at the utmost highest. 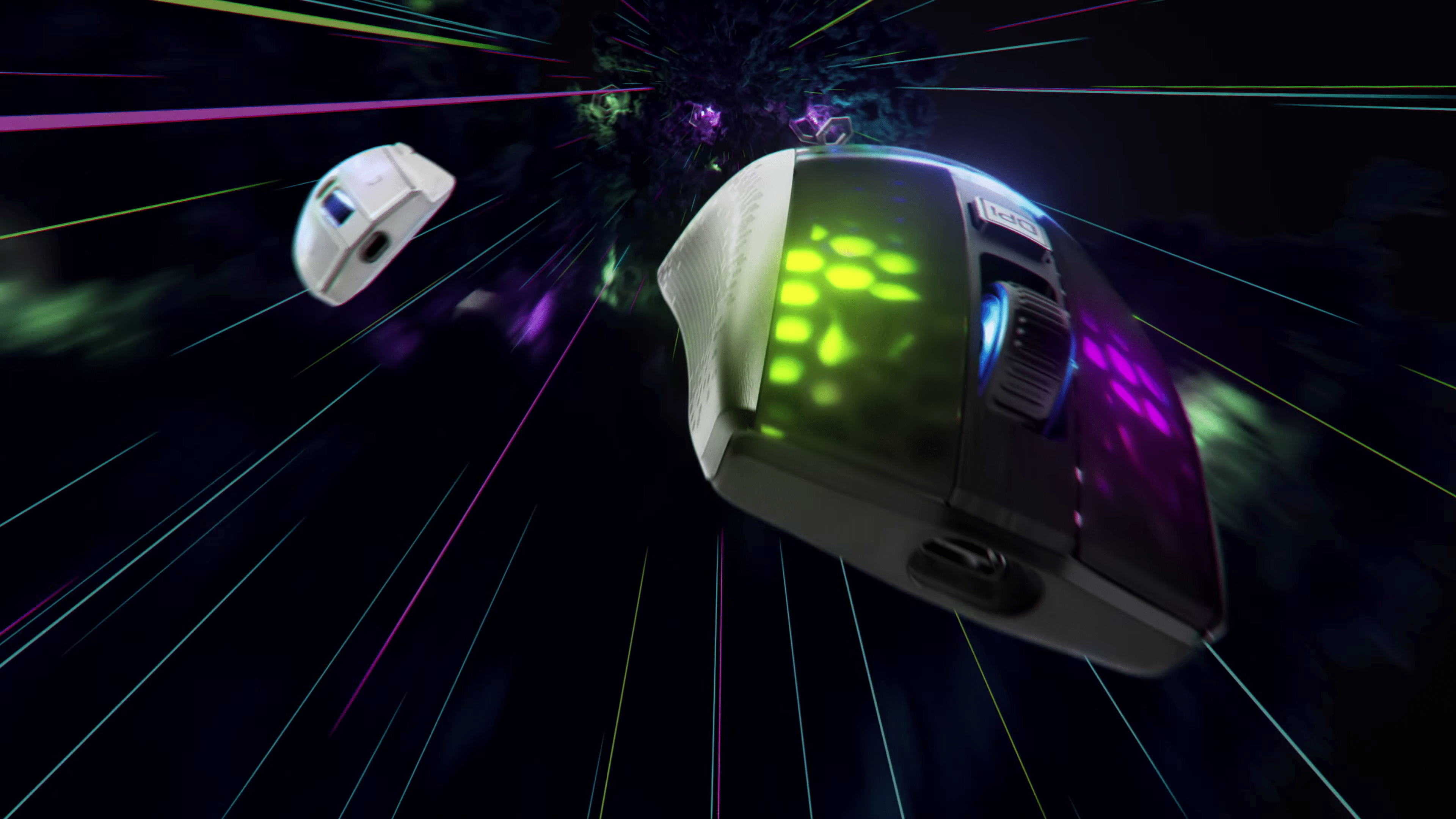 And mind you, this is a wireless gaming mouse. I’ve always had the thought that a wired connection is the sure way to get the best possible experience, and while that may still hold true in many areas, the Burst Pro Air certainly proves that it can go toe-to-toe with that connection type while being wireless. If there is a benefit being wired, the Burst Pro Air sure blurs that.

Of course, being wired does mean that you don’t ever have to worry about it dying on you mid-game, but that shouldn’t be a concern with the Burst Pro Air as it sports a battery that can last 100 hours on a single full charge. That’s four full days plus some of consecutive use, something you probably will never ever hit as long as you charge the mouse during down times, like when you are fast asleep. And even if it were to die on you, you could always hook it up via the USB-C cable for fast charging, all while still using it.

I know I shouldn’t be surprised, but I am. Roccat continues to prove that they are amongst the top dogs when it comes to PC peripherals. The Burst Pro was already considered to be one of the best gaming mice I have ever used, and yet, somehow, someway, Roccat has managed to improve on what I already thought was to be perfect. The Roccat Burst Pro Air easily sits up there as one of the best wireless gaming mice. It’s comfortable, slick, beautiful in design, and delivers top of the line performance to help you elevate your PC gaming, all at a very reasonable price point of $99.

Where to buy the Roccat Burst Pro Air?