While EA Play Live is a few hours away, it seems the big Battlefield 2042 new mode reveal has leaked ahead of the official announcement! This new mode is called “Battlefield Portal,” and it will give players access to content from past Battlefield games — Battlefield 1942, Bad Company 2, and Battlefield 3!

This new mode, which is being worked on by Ripple Effect Studios, is a highly-customizable, community-driven experience where players can build and share their own custom game modes that can be played straight from the game. The main Battlefield Portal menu will feature three options: one for DICE-created experiences, a second one for community-driven modes curated by DICE which rotate, and then the editor itself.

This Battlefield Portal includes content from three classic games mentioned above (BF 1942, BC2, BF3) with specific weapons, vehicles, and gadgets, The Portal will also bring back six classic Battlefield maps which include Caspian Border and Noshar Canals from BF3, Battle of the Bulge and El Alamein from BF1942, and Arica Harbor and Valparaiso from BC2!

All six maps have been rebuilt from the ground up in the Frostbite engine and reimagined with modern tech. The map layouts are as close to the originals as possible, but older maps from BF1942 have destruction physics added.

For the editor, players will have unprecedented control, as the player can select the game mode they want to focus on (which includes Rush which isn’t in the BF2042), and they even have the option to “center” each team on a specific Battlefield game. Say, you want WW2 soldiers to go up against BF2042’s Specialists, you can do that. This applies to weapons, gadgets and vehicles too. Players can customize these and control which ones are available by enabling or disabling over 100 options. 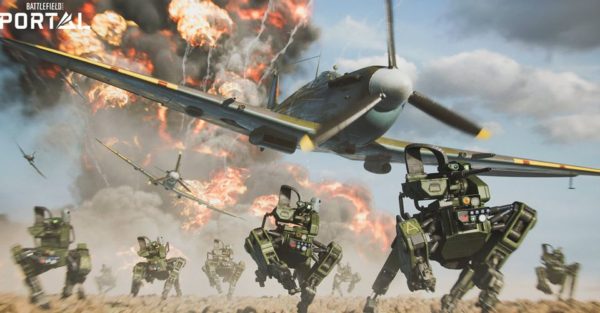 However, DICE has clarified that vehicles won’t be balanced, so naturally, a WW2-era weapons and vehicles will be underpowered against Battlefield 2042’s vehicles and so on. But players can change the settings if they wish (such as increasing the WW2 weapons’ damage, etc.).

There are more about the editor such as the “Rules Editor” which we’ll go deeper to once the final press release has been sent out (so it’s better explained).

As one might expect, the Battlefield Portal is indeed part of the game’s live-service plans post-launch. Content will be added over time, and new content added into Battlefield 2042 will be available in the Portal as well. DICE will keep an eye out on the community feedback via the portal to help shape it,

We’ll have more on the Battlefield Portal during and after EA’s event, so stay tuned!