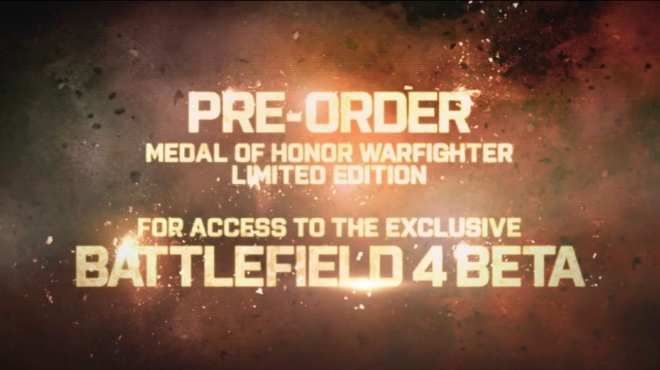 Last weekend, we reported on a leaked Battlefield 4 beta banner, which was removed by EA after a few hours. Today, EA and Danger Close released a brand developer commentary about the latest Medal of Honor: Warfighter multiplayer trailer. Ten seconds into the video, the following statement appears “Pre-Order Medal of Honor: Warfighter Limited Edition for Access to the Exclusive Battlefield 4 Beta,” which once again confirms pre-order access to the Battlefield 4 Beta.

“The exclusive Battlefield 4 beta will be available in Fall 2013,” EA has added. Although,  “additional details regarding Battlefield 4 will be revealed at a later date.”  Frank Gibeau, President of EA Labels, stated, “Though Battlefield and Medal of Honor Warfighter each offer players a completely unique experience, they are united by their underlying technology base — Frostbite. These are two of the hottest shooters, coming together to deliver a one-two punch of action, intensity and shooter entertainment.”

DICE’s next Battlefield game is now confirmed to be Battlefield 4, putting all the Bad Company 3 rumors to bed. Battlefield 4 is expected to release next year, which could also see the launch of next-gen consoles. Regardless of next-gen plans, Battlefield 4 should release on PC, PS3, and Xbox 360 by the end of next year.

Halo 4 Could Become Xbox Live’s Most Active Title, Taking Down Call of Duty