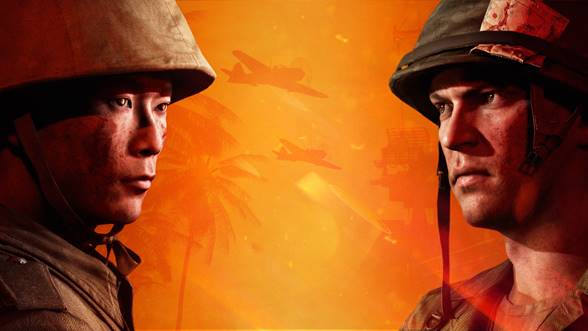 Earlier this week, DICE teased Battlefield 5’s Chapter 5: War in the Pacific with a teaser, with the trailer dropping later this week.  That day is now! Not only that, but we also know the Battlefield 5 Chapter 5 release date, what maps are included and more.

The Battlefield 5 Chapter 5 release date has been set for October 31, and before diving in, check out the trailer below first.

The first two nostalgic maps being released in Chapter 5 are Iwo Jima and Pacific Storm. Iwo Jima is a highly dynamic map that has the U.S. and Japanese forces engaged in a beach landing invasion in an all-or-nothing clash across wide-open black beaches and close-range environments. Providing more water-based combat, the Pacific Storm map takes players through treacherous weather on a set of islands as they must secure control points using boats, tanks, or aircraft.

Aside from that, there are new Battle Pick Ups included as well which are the katana and the M2 Flamethrower.

The previously mentioned katana is a Battle Pickup, meaning it needs to be found on the battlefield to be equipped. Both factions can use this time-honored melee weapon when the action gets close and personal. Chapter 5’s other Battle Pickup is the M2 Flamethrower, and its man-portable backpack design will make you highly effective against groups of enemy infantry.

As for fan-favorite Wake Island, which we know is coming based on datamined info, it’s coming sometime in December, though there’s no definite date yet.

Destiny 2 Festival of the Lost 2019 Release Date Announced, Here’s What to Expect