Here’s something kind of hilarious to bookmark your week: the Battlefield V beta’s profanity filter for chat has something odd going for it While it’s normal for games to censor racist, and other hateful words, it seems EA (or DICE) has taken it a step further.

Apparently, typing in “DLC” in Battlefield V’s chat (on PC) will result in the words being crossed out (censored). However, if people write in “free DLC,” then it’s fine. Check out proof of it below via Reddit user Alexs220. 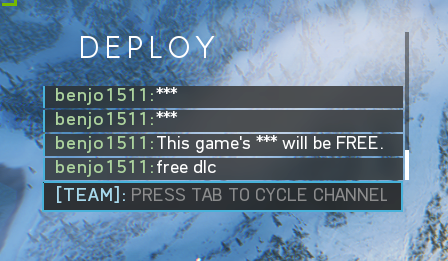 Granted, this is based on a beta, and chances are, this will be amended come launch, but it’s still funny to see given how Battlefield V publisher EA has notoriously been the poster child for microtransactions and exploitative video game business practices.

We’ve reached out to EA to seek a statement on whether this was intentional, or just a freak software mishap. We’ll be sure to update the story if and when they reply.

It’s been a busy week for Battlefield V given the beta is still on-going. DICE has confirmed that max ammo capacity and more are being tweaked for release based on the beta. We also ran a 7 Things You Need to Know Before Playing the Battlefield V Beta feature, which you should read as well. Finally, DICE has revealed a lot of significant details regarding Battlefield V’s battle royale mode called Firestorm.

Anthem: BioWare Thinks “No One” Has Nailed a Multiplayer Game That Has Co-Op and Able to Tell a Great Story

Anthem: BioWare Thinks "No One" Has Nailed a Multiplayer Game That Has Co-Op and Able to Tell a Great Story