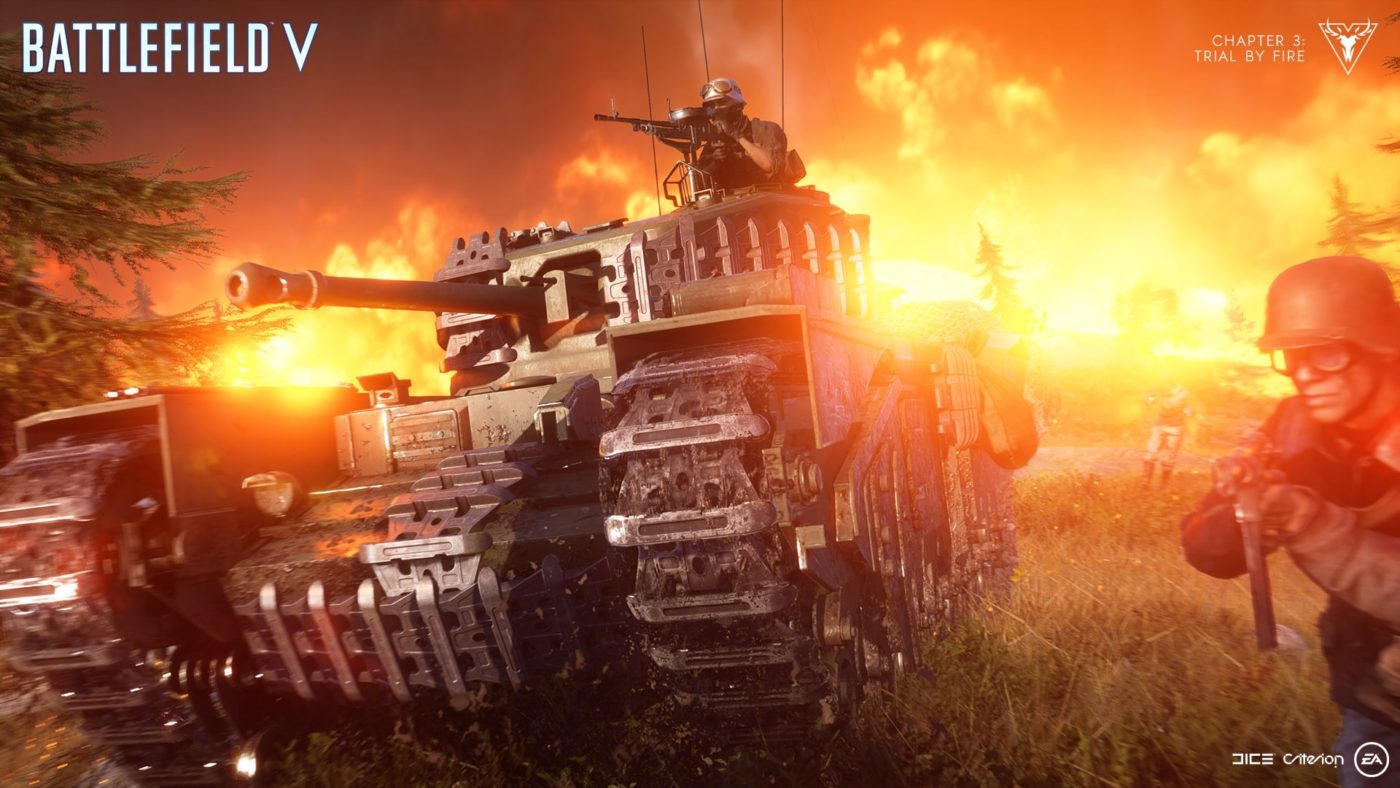 Check out the full Battlefield 5 Trial By Fire update 2 patch notes below.

Firestorm – Gameplay fixes and changes
• Fixed an issue which was causing a weapon to be misaligned when a player was in a man
down state while being spectated.
• V-1 and Artillery Strikes now count as “gadget kills”.
• Pistols that have been picked up by the player now properly drop on the ground if the
player dies.
• Players are now able to use the Flare Gun while in water.
• Increased the draw distance for grenades and melee weapons.
• Grenades now collide with the cover of the pickup truck instead of going through it.
• Fixed an issue where the active VOIP icon would not always show if the entire squad
would be talking at the same time.
• Players will no longer deploy a grenade automatically when dropping an item as a
passenger.
• When in a tank, the player will no longer switch to the selected tank gun while zooming
on the map.
• Added a red outline for the Artillery Strike on the map to make it more visible.
• The health cooldown UI no longer freezes if a player drops their healing items when it is
in progress.
• Getting an invite from a player while looking for players enables you to join the squad.
• If the user cancels and resumes the interaction with a safe, it will always reset.
• When the player is watching another player being revived, the camera will remain in the
same position.
• The Napalm Helmet will no longer obstruct the player when aiming down sights.
• Players can now jump as soon as they reach the start of the jump location.
• When waiting for the other players, the squad list shows the correct Armor Plates
number that the player had before death.
• Players will no longer reload when opening doors.
• The loot rarity icon is no longer visible through soldier bodies and vehicles.
• When getting killed by another player, the text for the weapon used will show properly.
• Switching weapon while dropping a weapon will no longer make the weapon being held
invisible.
• The Swap and Drop button callouts are updated if the player changes the keybind ingame.
• Interaction detection has been improved to avoid issues with loot near Objectives and
vehicles.
• The interaction prompt for safes will no longer be offset when the player interacts with it
repeatedly.
• The interaction prompt for safes will no longer double when the player interacts with it
repeatedly.
• Interacting with a safe repeatedly will no longer make the progress bar disappear.
• When the player is killed by an Artillery Strike, an icon is displayed in the kill feed.
• The first wave of capture points now start earlier, before the zone starts to shrink for the
first time.

Vehicles
• Fixed a bug that enabled players to use airplanes during the match start timer period.
The animation when entering and exiting vehicles is now smoother and should have less
unintended sudden camera movements.
• Fixed an issue that could cause a temporary black screen when reloading a stationary
turret while using its zoom functionality at the same time.
• Made audio improvements to audibility of other players’ tanks.

Weapons, Gadgets, and Specializations
• Fixed the Ribeyrolles aperture sights being misaligned and using the wrong
magnification.
• Tweaked the Gewehr 43 reflex sight to look better.
• Tweaked the Bren max recoil which was too low.
• Reduced the M1897 damage drop-off start distance by 1 m for all ammo types. Our data
indicated that the 1897 had a bit too much range compared to other shotguns.
• Changed the way camera recoil works. When firing, weapons are allowed to go a bit
more off center now. The true point of aim will follow the weapon and is not fixed to the
screen center.
• Changed the way SMG and assault rifle dispersion increases while firing in ADS. The
second, third, and sometimes fourth shots (for low rate-of-fire weapons) are now more
predictable while later shots are less predictable. Also shortened the time it takes for
dispersion to decrease when no longer firing. This means short bursts are a bit more
effective, while long bursts or mag dumps are a bit less effective.
• Fixed an issue that would prevent shotgun damage decals to appear on vehicles.
• The knife animation no longer triggers after firing the last round of a Panzerfaust.
• Bullet impact sounds have been further localized and the amount by which they can
attenuate non-player weapons has been reduced.
• Improved audibility of single-shot weapons.
• Improved audibility of late reflections for automatic weapons based on distance from
listener.
• Adjusted headphone mix for low frequencies to smooth out positioning.

Soldier
• Fixed a bug with the Medic class that would result in the weapon floating in the air while
the player was running briefly after reviving another player.
• The first-person animation when picking up health packs and ammo packs have been
moved to take less screen space for improved visibility.
• Soldiers that die in a vehicle are now ejected and can be revived.

UI/HUD/Options/Assignments
• Fixed an issue where the ticket counter was not visible when playing Breakthrough,
Frontlines, and Airborne.
• Disabled the saturation effect when regenerating health.
• Fixed a hang that could occur if players looked at server info from within the social hub
while being in the Your Company screen.
• Fixed a bug which could prevent players from deploying, prompting the error message
“The Class you have selected is violating the server rules” if they had equipped a newly
unlocked sight.
• Fixed a bug which prevented players from speeding up the bleed out timer when being in
a down state.
• Improved responsiveness and accuracy of the Commo Rose and the Squad
Reinforcements Rose when using a controller.
• Fixed an issue that would cause equipped vanity items to get unequipped when players
purchased and equipped something else.
• Fixed the placement of the buy button in the Replace Weapon screen to no longer clip
into the divider line.
• Fixed an issue where players would purchase something with Company Coin and get a
“Not enough Company Coin” error message even if they had enough currency.
• Fixed a bug that would cause the idle kick functionality to not always work.
• Improved how class characters are loaded when scrolling through them while in the
hangar between matches.
• Added the soldier stance icon from single-player into multiplayer.
• In the grenade selection menu, the smoke grenade selection will no longer show the Frag
Grenade demonstration video.

PC-Specific Improvements
• Increased maximum ray count in DXR Ultra to improve reflection quality.
• DLSS is now also supported in borderless mode.
• Made improvements to DLSS sharpness.
• Fixed an issue that caused the Customization screen to be darker than intended when
having DX12 enabled.
• Fixed a rendering issue that could cause graphical corruption when spamming various
player actions.
• Fixed a bug that would cause the game to hang if the player mashed all the keyboard and
mouse buttons while in the key binding menu. The player that found this must have
eaten too much pineapple pizza.
• In Firestorm, opening the map and using the “scroll” button while inside a tank in the
gunner position will no longer switch the selected tank gun as well.

If there are new bugs introduced, or new features that are not in the patch notes, we’ll let you know.

Battlefield 5 Currency Release Date Set for Tomorrow, Here’s an FAQ About It