by James Fleming
in DLC and Expansions, News

With rumors swirling about the new Overwatch hero, many fans have their theories about which character will join the roster as the 27th playable persona. Well, we can forget all about those rumors, as it looks like Brigitte Lindholm will indeed be the new hero.

The Overwatch Japanese Twitter account accidentally tweeted the file location path instead of an actual image. This let fans see the name of the image file, which was “Brigitte Tease.”

Reddit user Fogmoon managed to snap a screenshot of the accidental tweet, shortly before it was removed: 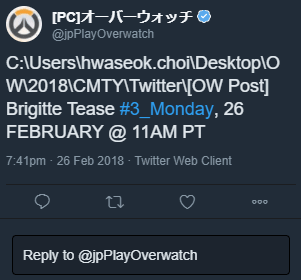 This certainly looks like a mistake, although it could very well be a genius marketing move.

So, it’s essentially confirmed that the Brigitte Overwatch hero theory was correct. Are you happy with that news? Or were you hoping for a different character? Let us know.

Take a look at the first and second new Overwatch hero clues, which were (intentionally) revealed by Blizzard last week.