Bungie has supplied detailed patch notes for Destiny Update 1.2.0, which is currently rolling out on all platforms.

In the notes, the studio has also provided a preview of the Hotfix that will go live on May 19 at around 10AM Pacific. This is the same hotfix that will unlock all of the new House of Wolves content, which launches on the same day and at the same time.

Petra Venj, The Queen’s Emissary, is also currently in the tower offering new “Wanted” Bounties which will allow Guardians to earn reputation towards House of Wolves weapons and gear. There is also a new House of Wolves Public Event. 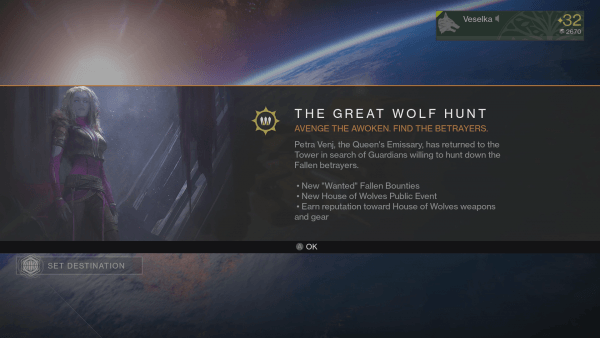 Have a look, courtesy of Bungie.net.

Destiny Expansion II: House of Wolves arrives with the launch of Hotfix 1.2.0.1 on May 19 at around 10AM Pacific, according to Bungie.

As a bit of “super good advice”, the studio also says that the new Daily Mission, Weekly Heroic Strike, and Nightfall Strike for that week won’t be available until the new update is applied. Thanks, matrixblue.