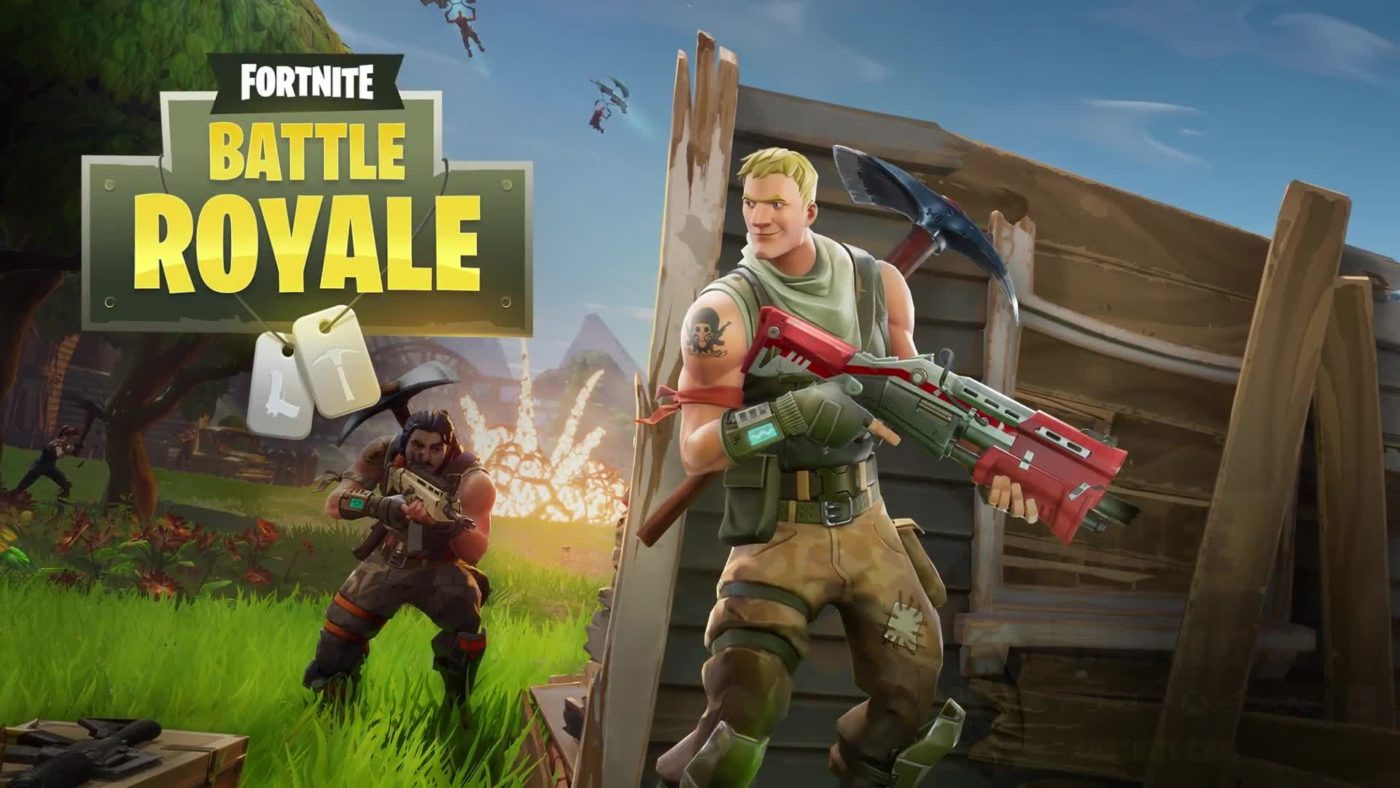 The maintenance is now over. Players can experience the new content and improvements added with update V2.2.0.

Fortnite is now down for scheduled maintenance. There’s no ETA on when the game will be back up and running.

Following the downtime, players will be able to enjoy the new V2.2.0 patch, with all of its fixes and new content.

Discover a new city, underground mine and a number of other brand new locations scattered across the Western side of the map. Biomes are also premiering in this patch, enriching the environment and personalizing each area. Where are you going to drop?

Get a free 5 tier head start in Season 3 when you purchase the Season 2 Battle Pass.

Buy ten Battle Pass tiers for the price of six with this special bundle in the store. On sale now for a limited time!

Thank you all for being a part of our 2017 Battle Royale Winter event! We couldn’t ask for a better community to spend our holidays with. The Save the World winter event has been extended until January 24.

Continue your conversation in the pre-game lobby, which now fully supports voice chat!

Updated the scope for the Scoped AR.

Replaced the old arrow reticle with a more modern design. It should be easier to tell where you are aiming and where your crosshair actually is.

The Snowball Launcher has been replaced by the normal Grenade Launcher.

Slightly increased the size of the grenade (loot).

Fixed an issue where the grenade toss animation ended prematurely when tossing the last grenade in a stack.

The Boogie Bomb effect will now kick players out of weapon targeting.

Players can no longer place traps while affected by the Boogie Bomb.

Friendly Fire is now disabled. This is exploratory and subject to change. We will be closely evaluating this and want your feedback!

Players will now immediately aim their weapon upon landing on the ground if they press and hold the aim button while in the air.

Empty chests and metal street lights will no longer block players from building.

Corn stalks are now destroyed upon taking any damage.

Adjusted how ammo crates drop ammo so that they don’t overlap the ammo box itself.

Attempting to use a scope while playing an emote will now cancel the animation.

Fixed an issue that prevented players from picking up eliminated player’s items.

Fixed an issue which caused a trap to deal no damage if a ramp or roof is placed in front of the trap.

Build mode visuals no longer persist when using a Launch Pad or when knocked into the DBNO state.

Fixed an issue that allowed players to see through the smoke grenade effect while scoped.

You can now move forward and backward while gliding when facing straight up and down.

Fixed an issue which caused the glider to sometimes deploy sideways after using a launchpad.

The map has been updated with many new points of interest, biomes, and more!

Players now interact with grass and foliage as they walk through it.
Added water effects when entering and exiting water.

Added a new post-process effect for when your camera goes below the water surface.

It will now look like you are actually underwater, and you can no longer see for an infinite distance.

Increased the amount of metal harvested from shipping containers.

Starting on January 21st, 2018 the Weekly Item shop is changing to the Featured Item Shop.

Offers will update twice weekly instead of once.

When spectating a far away player, a “loading” message may be displayed for a short time, and the game world will appear after loading completes. You cannot switch to another spectated player until the load completes.

The “Reset Building Choice” option now defaults to “Off” in Battle Royale.
Added a new option to select which voice chat input device to use.

The “Select Mode” button is now greyed out and unselectable after readying up.

When selecting “Report Player” the “Name” field will no longer auto-fill the the player’s own name.

Adjusted the “Cancel/Unready” button so it looks more like the “Ready” button.

The “Press E to Pickup” prompt no longer persists for DBNO players.

Fixed an issue that made the voice chat icon appear to be active if the player disabled their voice chat while it was active.

Fixed an issue which caused the revive icon to remain over a player if two players revived them at the same time.

Players will now be able to unready if the party leader cancels matchmaking while in the “Loading Content” phase.

The matchmaking UI will now properly update when joining a different Battle Royale lobby while the user is set to Ready.

Added level streaming, which loads the world on-the-fly as you move around, enabling a richer map and improved performance.

Improved frame rate by greatly reducing the number of objects that need to be updated.

Loading times have been greatly improved. It’s over twice as fast to load into the match on PS4 and Xbox One!

Greatly reduced hitching caused by updating objects when the time of day changes from day to night, and vice-versa.

Reduced the amount of system and GPU memory used.

Optimized the visual effects played when distant buildings are hit.

Improved overall frame rate by optimizing how player animation and footsteps are handled.

Cozy Campfire and Boogie Bomb items no longer cause a hitch when seen the first time in a match.

Encountering players with specific skins for the first time in a match no longer causes a hitch.

Greatly improved the visual quality of distant trees by using impostor billboards instead of regular meshes. This also improves overall frame rate and reduces visual popping as you approach the trees.

Fixed an issue that could cause remote players to look like they have stopped animating.

Improved the “Ride the Pony” animation so the character’s arm no longer pops.

Players will no longer appear as if they are still holding a weapon after being hit by a Boogie Bomb.

Fixed an issue that prevented the character’s launch animation from playing if a Launch Pad is placed directly at a player’s feet.

Adjusted the color of the Shield Potion so that’s easier to see.

Fixed an issue that caused teammates to appear stuck in the sliding animation if they were knocked DBNO while in the air or sliding.

Added a pick-up sound effect for the damage trap.

Fixed an issue which caused footstep sounds to play at an incorrect cadence or not at all while a player is not on screen.

Consumable item audio is now adjusted with the SFX volume slider rather than the Dialogue slider.

Fixed an issue which caused players to hear bullet “whiz-by” sounds from their own shots.

Fixed an issue that sometimes caused a falling wind sound to loop repeatedly after being eliminated.

Gunfire audio will no longer pan to the left & right as you move away from where you shot.

Fixed issues with rapid left/right panning when dropping weapons, and attempting to build in an invalid location.

Removed the jarring stone impact sound from the AC/DC pickaxe.

Cosmetic items can now be rotated in the locker and store pages. Left click and drag or use the right thumbstick on the controller to rotate them.

Removed the winter theme from the pre-game lobby.

Fixed an issue which allowed players to get credit for completing challenges that were not completed.

Fixed an issue which allowed aim assist to function while using a mouse.

Friend requests can now be sent to players that have left the match, using the + icon next to their name.

Clicking “Join” on a Discord invite when the client is not open would will no longer cause you to fail when trying to join a party.

Fixed an issue with the Grenade Generation perk. The player is now rewarded with a grenade after eliminating 20 enemies rather than 21.

Fixed an issue where the pickaxe heavy attack was not harvesting resources.

Fixed an issue where the Shielder enemy would flicker after the Husk it was shielding was defeated.

Fixed an issue that caused quest highlights on objects to disappear when building near the object.

Fixed an issue that caused some parties to disband after a game.

Added clarification to the tooltip of the Constructor ability, “DECOY”.

It now states it’s made of metal, and thus vulnerable to nature damage.

Fixed an issue where proximity mines wouldn’t disappear when the player who placed them left the match or died.

Fixed an issue where frag grenades could still be used even when the player didn’t have enough stamina to use it.

Fixed an issue where the Frag Grenade perk “Cluster Bomb” was triggering twice rather than just once.

Fixed the tool-tip for Air Strike which incorrectly stated that Air Strike drops 12 bombs, instead of 13.

Fixed an issue where the Outlander Fragment abilities TEDDY and Shock Tower weren’t receiving the energy damage bonus from the Energized support perk.

The Commander XP curve has been inflated to make way for front-end crafting. This is to ensure that low-value items (e.g. ammo) are worth at least 1 Commander XP when crafted in the main menus.

Commander XP will appear larger than it did previously, but the amount of Commander XP you have earned toward your next level has been preserved, and the time it takes to level up remains unchanged.

Fixed a localization issue in the Transform menu.

Fixed an issue where the game background would move while using a controller to view the mission details.

Fixed an issue which caused players to lose menu functionality after leaving a party.

Fixed a Research skill tree node that was missing a prerequisite.

Fixed an issue where recent player lists weren’t populating immediately after a game.

Searched chests and containers will no longer block players from building.

Cornstalks are no longer searchable.

Your game window will now properly appear on the primary monitor.
Bug Fixes

Fixed a rare crash on Xbox One.

Are you looking forward to experiencing the changes that the new Fortnite update brings? Let us know.

Marvel vs Capcom Infinite Update (1.06) Barrels Out, Here Are the Tweaks