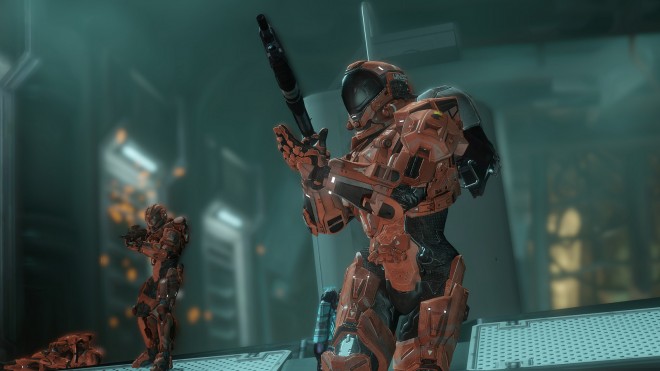 As you may know, developers 343 Industries have been rigorously testing, tweaking, and tuning weapons in the Halo 4 sandbox as they work through a series of phases which will eventually bring about a significant weapon-focused update this June.

According to the latest Halo Bulletin, the studio will be inviting a small group of community members to test out the latest tweaks and get a sneak peek at what’s in store for the next update.

Fans will be able to join in via a special live streaming event, giving all players a chance to catch a glimpse of the latest weapon updates before the new settings go live globally. A date and time has yet to be announced, but you’ll be able to catch all the action, including insight from 343 developers and gameplay from community members, on 343’s official TwitchTV page.

Additionally, you’ll be able to view a detailed list of final changes on the Halo Waypoint shortly before the event goes live. These changes, once solidified, will deploy across all Halo 4 playlists on Monday, June 3.

343 writes that onces these changes go live, they “estimate that [they] won’t be making adjustments for at least several weeks as [they] examine the results of how this update changes gameplay behavior, strategy, loadout selection and more.”

3-time Halo National Champion Dave “Walshy” Walsh stopped by the studio last week to test out some of these updates. Here’s what he had to say:

343: Hey, Walshy! What were your first impressions with the new weapon tuning? Did anything immediately stand out as different, enjoyable, confusing, etc.?

Walshy: New weapon tuning felt much better! Three features stood out the most to me:

343: I’ve certainly seen quite a bit more LightRifle in our playtests. The slightly increased ROF when zoomed makes it even deadlier at range. So tell me – was the 4-shot BR as crispy as you expected?

Walshy: Cookie Crisp crispy! I might have to start doing the wolf howl after each kill! On a slightly more serious note, the 4-shot kills give the game the faster kill time that I loved from previous Halo games.

343: We played a 1 vs. 1 on Haven with Assault Rifles only, and I think we both agreed that the new tuning made it quite interesting and different. How did you feel about the reduced auto-aim on the automatics?

Walshy: First off, you and I both agree that I am the best 1 vs. 1 Haven ARs only player in the world. Secondly, I think this will only result in even more dominance from me in 1 vs. 1 Haven ARs! I think this change accounts for the few automatics in the top level of play to take slightly more skill to use. However, this change primarily affects the casual level of play, which is the majority of Halo players – overall, I think everyone will be very happy with this change.

343: How do you think these tuning updates will affect gameplay, both Matchmaking and tournament play?

Walshy: Both tournament and Matchmaking play will see more variance with starting weapons. Biggest difference in my opinion will be in the short and long-range game since the DMR currently is the go-to weapon for almost every situation. With the updates to the BR and LR, we now have weapons that, on paper, are superior to the DMR. I’m excited for this change and am excited to see how it changes the game!

Looking forward to the upcoming Halo 4 weapon tweaks? We’ll get the juicy details up as soon as they become available.