Battlefield 3 day one patch is everything but confirmed.

Earlier this month, in an interview with Strategy Informer, Patrick Liu agreed that Battlefield 3 will “probably” have a day one patch, which “will include feedback from the beta”. Patrick Bach also suggested the possibility of having a patch on release day. He clarified to VG247, “we [DICE] will still have time to do, day one patches and changes to the Battlelog that will actually be game-changing.” Now, onto more concrete evidence. Microsoft’s Major Nelson publishes a weekly round-up of all the new content coming to the Xbox Live Marketplace. The preview Major Nelson publishes includes game releases, DLC, and avatar goodies. However, in this week’s update, under the avatar section, one item stood out, which is a “Battlefield 3 update” going live on 25th of October (same as the launch day of BF3 in North America). Last week, EA published Battlefield 3 avatars, but it’s not common for avatars to get updated, let alone on the release date of the respective title. This leaves us with the day one patch for Battlefield 3. We speculate that this will also be the case for all other platforms.

In case you haven’t heard, BF3 – Longer to Rank Up in Final, Spawn System Tweaked, and Server Browsing for Consoles. 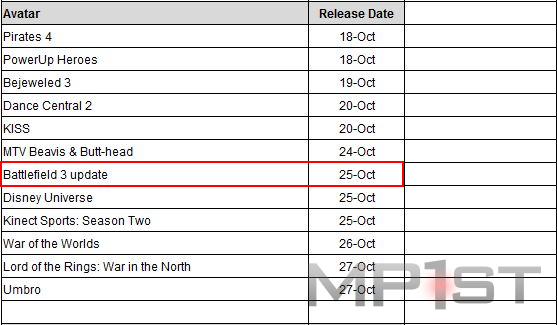 BF3 – Longer to Rank Up in Final, Spawn System Tweaked, and Server Browsing for Consoles

AAA Games: What They Have in Budget, They Lack in Creativity