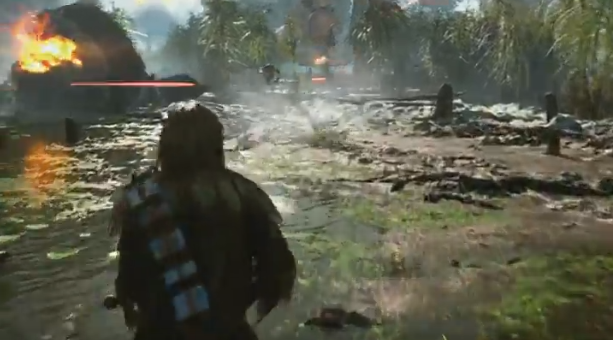 Star Wars Battlefront II is but a few weeks away, and EA is ramping up the info deluge with a new look at one of the most famous Heroes in its stable, Chewbacca! In this super short gameplay clip, we can see Chewie’s abilities which involve Shock Grenade, Furious Bowcaster and a crowd-clearing Charge Slam.

Be Mighty. Chewbacca’s strength is second only to his loyalty. #StarWarsBattlefrontII pic.twitter.com/fShSlzTWA7

At the end, we see Chewbacca gearing up to face Darth Vader himself! Shame we didn’t see what happens next.

For more Hero gameplay clips. check out Lando Carlissian’s abilities here, Princess Leia’s, and even Emperor Palpatine’s. If you took part in the beta, don’t forget that you’ll be given a Founder’s Crate that has some in-game goodies that you can use when the game releases this November 17.

Which Hero do you want to play as the most? Can Chewbacca stand up against Darth Maul and the rest of the lightsaber-wielding Heroes in your opinion?