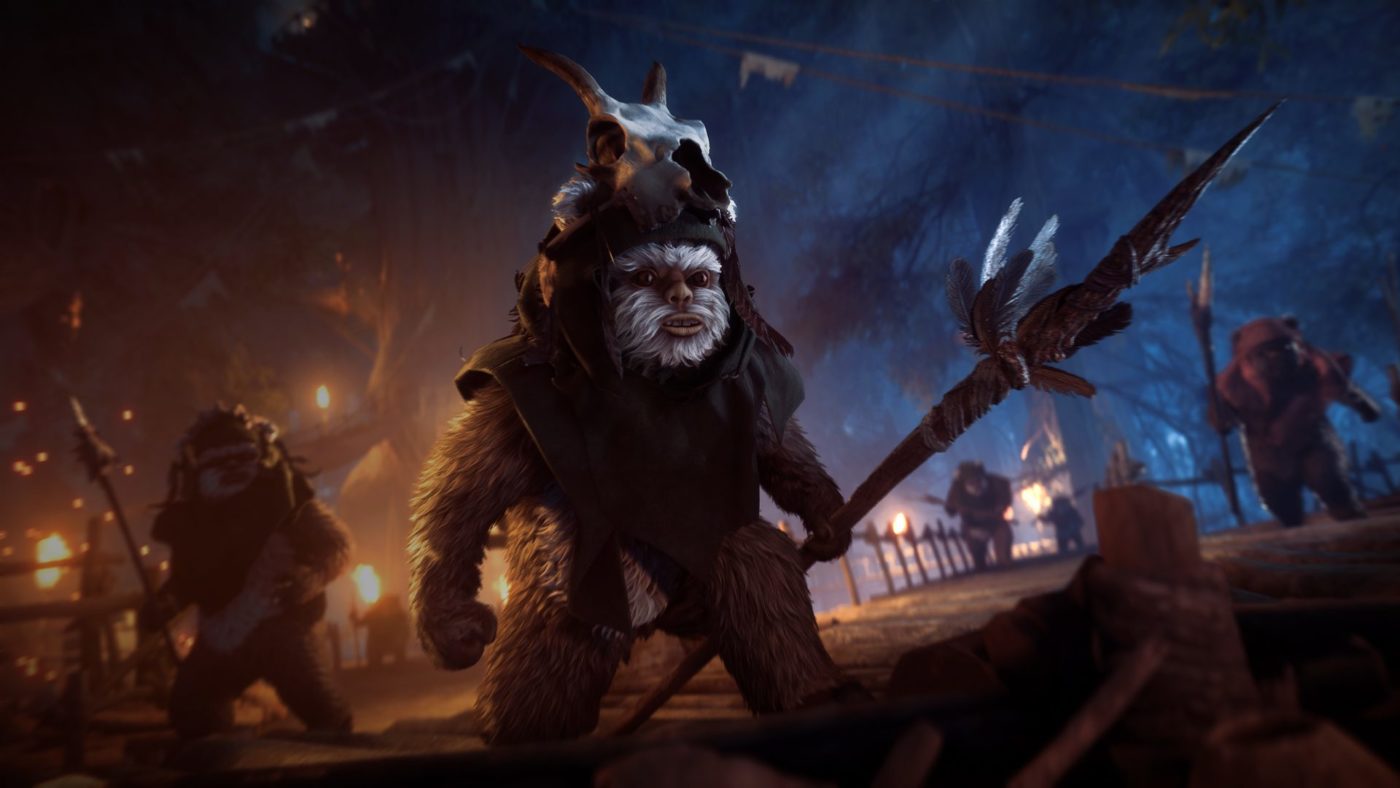 The Star Wars Battlefront 2 next update called the “Age of Rebellion” is out tomorrow, February 26!  Aside from the usual list of gameplay changes, there’s a lot of new stuff inbound too. Prepare for two new Reinforcements, new content in co-op, a new weapon and more!

First up, check out the official patch notes first and then dive into the new content.

Joining the Rebellion will be the Ewok Hunter, a Reinforcement option we know that many of you have been talking about since we first released Ewok Hunt back in 2018. The Ewok Hunter is a cunning bundle of fur that hunts its prey with bow, spear, and Wisties.

The Ewok Hunter’s primary weapon will be its Hunter’s Bow which has dual firing modes. When the bow uses its default zoom (i.e. no zoom), it will pick out targets for you to fire at, similar to Lando’s Dead Eye ability. When zoomed, you’ll have manual aim control for far greater control and the ability to hold your draw longer to increase maximum speed and damage. When firing the bow, the Ewok Hunter does not appear on scanners.

Should the Ewok Hunter find themselves in a situation that requires more damage and resistance, the ability Valiant Horn comes into play. Blowing the horn will not only improve their attacks, but will also grant them additional damage resistance. Be warned, though, while Valiant Horn is active, the Ewok Hunter will constantly appear on enemy scanners.
Also at their disposal will be their trusty Wisties Pouch. Bring a little bit of Endor with you, no matter which battlefront you’re on and throw these fierce fire sprites towards a nearby enemy to disrupt and inflict burn damage to them.
Activate Hunter’s Instinct and the Ewok Hunter will draw upon their natural instincts, allowing them to uncover and single out weakened opponents.

For the Galactic Empire, the ISB Agent will be joining the ranks, providing the Empire with their first opportunity of a dual wielding character.

Armed with two RK-3 blasters, the ISB Agent is skilled in intelligence gathering and close combat, working tirelessly to rout the enemies of the Empire.

The ISB Agent excels at getting in and out of combat zones, especially when her Assault Training ability is activated. While under the effects of Assault Training, the ISB Agent will benefit from increased sprint speed, during which she gains an overall damage reduction.

Locating enemies of the Empire is made easier thanks to the Imperial Intel ability. Once activated, the ISB Agent will scan the nearby area to reveal the 4 closest enemies. The number of enemies revealed will be increased by defeating more while it’s active, up to a total of 10.

Double Your Effort is her final ability and empowers nearby allies by regenerating their base health. It can only be used if there’s an ally in range.

The Age of Rebellion will be coming to Co-Op with a total of 7 locations. We’re particularly excited about bringing both Kessel and Jabba’s Palace to Co-Op, but equally so as to be returning to the likes of Tatooine, Death Star II, and other favourites.

The full list of Age of Rebellion planets coming to Co-Op is as follows:

With Supremacy, we have created a number of Capital Ships; the Venator, Dreadnaught, MC85 Star Cruiser, and the First Order Resurgent-class Star Destroyer. In February, we start the process of bringing these ships into Co-Op, meaning they will be standalone maps for you to attack and defend, starting with the Republic Venator and Separatist Dreadnaught.

We’re expanding the selection of trooper weapons as each of the four classes will receive a new blaster (cross-era compatible) to equip and modify.

E-11D
This medium-range blaster rifle was manufactured for precision and reliability, and will be available for the Assault class.

DL-18
The short-range DL-18 is a popular blaster pistol in the Outer Rim. While slightly less powerful than its heavier counterparts, it makes up for that with a faster rate of fire.

T-21
A robust short-range heavy blaster manufactured for continuously discharging powerful bolts at the expense of low rate of fire.

Cycler Rifle
While appearing crude when compared to more sophisticated blasters, the long-range Cycler Rifle was a versatile and durable weapon, popular among the Tusken Raiders native to Tatooine.

During the February update we will also be making some changes to a number of heroes, including the anticipated improvements to Leia.

Leia Ability Improvements
We’re making a number of changes to Leia, and it starts with modifications to her E11 blaster.

In addition to the above modifications we are also implementing changes to her shield, which now also heals friendly forces within it for 5 health every second.

Rounding out the changes to Leia is a change to her Flash Grenade, which is being replaced by Thermal Detonators. Leia will have the ability to throw 3 Thermal Detonators which explode after 0.85 seconds. This ability will then enter cooldown once all three detonators have been thrown.

Due to the above changes, some tweaks are being made to her Star Cards
Old Card: Blinded
New Card: Fearless
Description: The blast radius of THERMAL DETONATORS is increased.

One modification to Leia’s milestones will also be implemented in this update, which sees Blinding Flash Grenade changed to Plenty of Explosions. To complete this milestone you will need to defeat 30 opponents with Leia’s Thermal Detonators. If you’ve already completed the milestone, it will be unlocked, so there is no requirement to unlock it again.

Chewbacca Bowcaster Improvements
Chewie’s Bowcaster will be receiving a set of tweaks and improvements with the aim of making everyone’s favourite Wookiee more efficient against Troopers while also missing fewer shots.

Fans of the Heroes Vs. Villains game mode will be pleased to hear that both the MC85 Star Cruiser and the Resurgent-Class Star Destroyer are coming as playable maps. We have also made map layout changes to both Geonosis and Yavin 4 for this mode and we’re keen to hear your feedback on both.

WIthin this update, we will be making some improvements to a number of Age of Rebellion Reinforcements. The Wookiee Warrior, Imperial Rocket Trooper, and Rocket Jumper will all be receiving updated appearances.
These new appearances will become the default look for each of them with the previous default available as an unlocked option to choose from.

Troopers are also getting updated accordingly. The Imperial Death Trooper will receive the E-11D Blaster Rifle, the Rocket Trooper will be equipped with the E-11 for improved combat efficiency, and the Jump Trooper will use an A280C for automatic fire.

We have also tweaked the Dual Wielding functionality which will improve both the ARC Trooper and the ISB Agent. Both Reinforcements will now play more consistently when firing the pistols. They will now be automatic and moved onto a single button, while power blast will become an alternate fire ability.

The Age of Rebellion Update will also include a number of new User Interface options, allowing you greater freedom over how your UI will look.

There have also been improvements to the PC Chat window, which is now positioned at the top right corner of the screen, and is included within a vertical stack of three widgets: Network status, PC Chat, Kill and Event Log.

Various visual updates on the Scoreboard have been made, too, with character levels now on display.
The Age of Rebellion Update is shaping up to be a great addition to the game, and it all arrives tomorrow, Wednesday 26th February. We’ll see you on the battlefront.

That’s a whole lot of new stuff, right? Once the patch is out tomorrow, we’ll be sure to let our readers know.

In other Battlefront news, it has recently been revealed that a spin-off was being developed before being canned by EA.