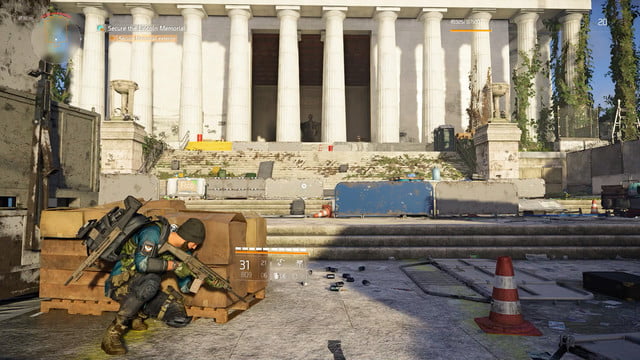 Earlier today, Ubisoft Massive held its The Division 2 State of the Game show wherein the developers talk about The Division 2’s current status, where the studio is taking the game, upcoming fixes and more.

If you didn’t catch the entire thing, don’t fret! Thanks to Reddit user JokerUnique, we have a The Division 2 State of the Game summary for you to peruse.

Battle for D.C. is out

When you have leftover keys after all that, you can still unlock the Apparel Caches with them but you will not get the Black Tusk Uniform. The uniform can only be unlocked when you get all 30 pieces of the event until April 24th.

How Are Keys Earned?

From there, keys can be earned from the following sources:

There is no limitation on how many keys you can get per day.

Over the weekend an exploit was discovered that involved the daily project, that is why they were deactivated for a couple of days. That has been resolved and they are now back in the rotation.

Signature Ammo reset after each relog

They saw the reports – they are currently investigating if that is intended or a bug.

They fixed an issue of how to get the last Ivory Key, but players are still reporting they did not get all of them. They are aware of that issue. Please let them know on the official forums which Ivory Keys you are missing so that they can investigate what the exact issue is.

Obviously not intended. It is a high priority issue, because it impacts the gamplay and line-of-sight. But it requires a client patch (Update 2.1) to fix that issue. The plan is to drop that patch as soon as possible. A T-Pose-Emote is not planned at this point.

Many players have reported that they have problems upgrading the Crafting Bench to World Tier 5 (or even before that). They have a fix ready that will also drop with Update 2.1.

There are a lot of instances and situations where you can get stuck with your character and can’t move anymore. Please report on the official forums when exactly this happened, what you did and what was the last thing you did. Some of the causes will be fixed with Update 2.1, but they will add more fixes as the issues are found.

There are a bunch of situations where the Revive Hive does not work properly. They have to look at each of the situations individually to determine a fix. Some fixes are already scheduled for Update 2.1 but they are continuously looking for more causes.

It is also a known issue that the two-piece bonus of the True Patriot Gear Set is not applied properly, there will also be a fix for that in Update 2.1.

There is currently an issue with NPCs, that they have the impression, that they have the upper hand and can win the encounter. That is why they are very aggressive and are trying to rush the players. This is of course not intended. They should only attack in that way under certain conditions. It is currently not known when this issue will be addressed.

They know that players are frustrated to not get only GS 500 drops on World Tier 5 when they have reached GS 500 on their character. There is currently a window where gear can drop below GS500 and they are willing to look into that. At the moment there is no change scheduled though.

They know about the issue that many players with Nvidia graphics cards have crashes when they use DirectX12. They are currently working with Nvidia to get a set of new drivers out that should address the issue. Currently, we have no specific date for that.

They are also looking into all the reset timers to get them more streamlined for all the different content.

Balancing of the Game

Many things have been changed with the last update and there was a lot of feedback.

The balance of the game is a constantly evolving thing and that is why it is very important to give feedback about what you are experiencing and what you think works and what does not. They will keep listening and adjusting accordingly.

They are still planning to do a lot about balance, but they will let the specialist specify that when the time is right.

What they are also looking into is armor and survivability, but a change in that area is not scheduled for Update 2.1 or Update 3

To test the new content and the new items that will be added with Title Update 3 (April 25th), they plan to do a PTS (Public Test Server).

PTS is scheduled for next week, more details will follow.

Whew! That’s a lot! Note that there’s also planned maintenance tomorrow, which will take effect on 3:30 ET, and will last for three hours. We’ll get a reminder post up once it’s time.