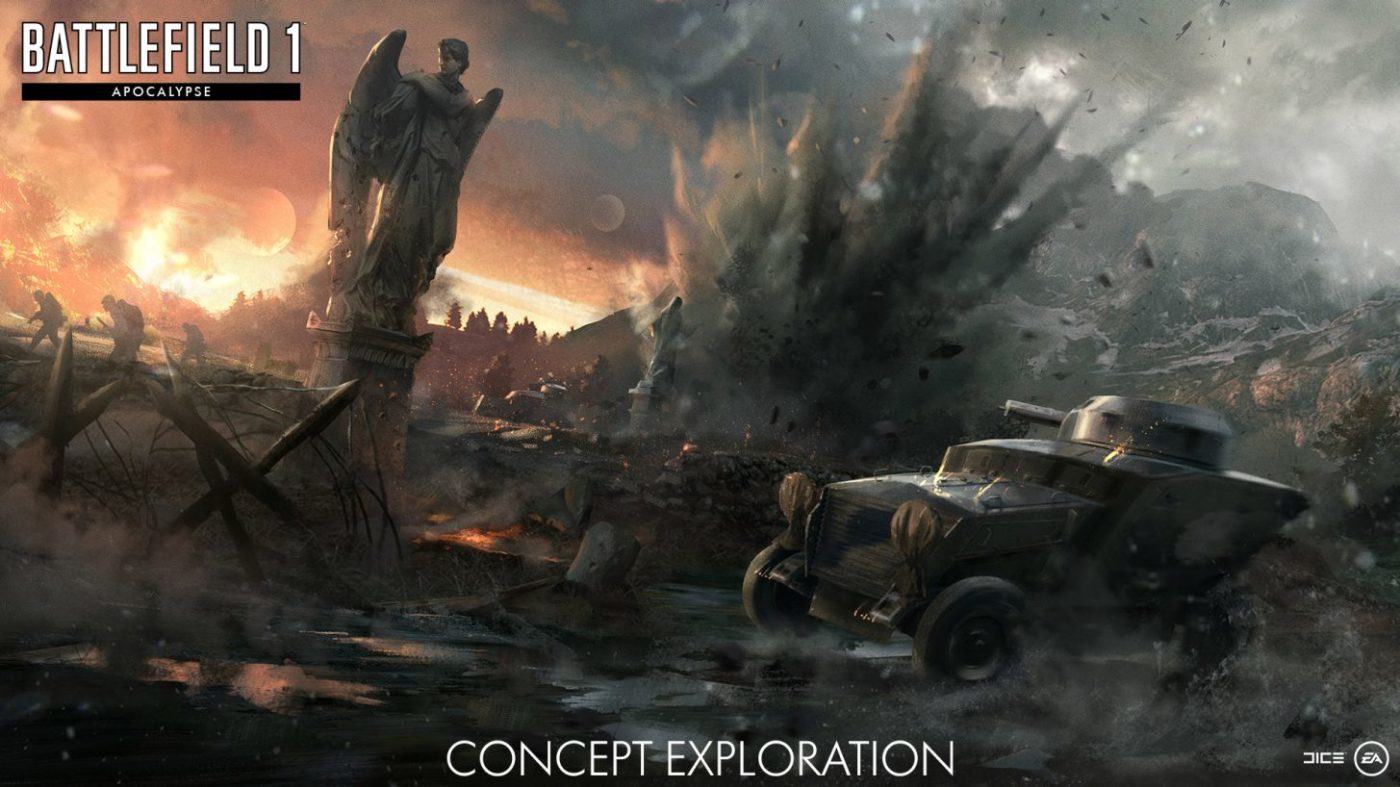 It’s finally here, Battlefield 1 players! The final expansion for Battlefield 1 called “Apocalypse” is finally out for BF1 Premium members! This two-week early access to the DLC comes with a hefty download that includes updates on the base game. Same as before, we’ve included the Battlefield 1 patch notes below.

Before you dive in to the changes to the base game, check out the explosive trailer for the Apocalypse expansion below.

With Apocalypse, new maps, weapons, gadgets and more have made their way to Battlefield 1! We’ve posted about it before, but you can read about it in more detail now.

The Austro-Hungarian forces have bombarded the Italian army with toxic gas to gain a foothold in the village along the Isonzo River. Dive behind the Castle Ruins of the old world or the craggy rocks of Blood Creek, dodging Cavalry and motorcycles alike, while keeping one hand on your trusty gasmask to fend off the barrages of the Livens Projector. Fortify Capello Grove, near the war-torn bridge, and gain access to several artillery guns to push back enemy forces.

After continuous artillery shelling, all that’s left is muddy terrain, littered with debris and rubble where buildings and trees once stood. Surrounded by a blazing forest on one side and putrid gas on the other, British and German soldiers contend over fallen tree trunks and sunken tank husks in the Augustus Wood. Duck into deep trenches, cutting across the territory to find shelter in the crumbling walls of Edwards House. Storm the high ground to control Zonnebeke Church and take cover behind the stone skeleton that remains.

British troops have dug in with a trench network that cuts through the golden wheat fields, opposing German dugouts carved into the earth just a few hundred meters away. Follow tactics of trench warfare and take possession of the Marsh Landing, prepare for the final push beyond the river. Just past the treacherous Hill 21, you’ll find only death and destruction at the site of the Sugar Mill, the latest victim to a never-ending British artillery barrage.

Top pilots take to the skies above the towering peaks of the Alps. In freezing conditions and high altitudes, flying aces attempt to outmaneuver other single-seat fighter planes as they engage in deadly dogfights. Use aerial cunning and tactics to defeat the enemy and claim your place as a knight of the sky.

Battle among the clouds, high above the British capital. Aircraft of all types collide in this cataclysmic conflict. Using the superior speed and maneuverability of Fighter planes, tail your enemy and lay down fire to bring down attackers. Tactical bombers line high in the sky to drop overwhelming payloads on unsuspecting airships that are armed with anti-air armaments, laying waste to circling pilots in this clash between titans.

A re-imagining of Air Superiority, players will engage in stunt-laden dogfights using the many aircraft available in Battlefield 1. Whether you’re spinning among your enemies in Attack biplanes, or offering support as a gunner, flying aces and novices alike can contribute to their team’s success.

As enemy crafts fall from the skies, teams will earn points. Each aircraft type varies in the awarded score, successful players will focus their attention on the big payouts. You may join a match with a Behemoth, move quickly to remove the threat and secure victory.

Expanding the aircraft armada, we’re introducing two new bomber planes that are not only in this expansion pack but fitted into older maps as well. The British Empire is equipped with the Airco DH 10 Bomber plane, while the Austro-Hungarian Empire and Ottoman Empire have access to the new Hansa-Brandenburg G.I. bomber.

Horses are equipped with a gas mask in Battlefield 1 Apocalypse maps, protecting them from the onslaught of toxic gas attacks.

Assault Class soldiers will now have a counterattack to airplanes with the AA Rocket Gun. Equip this in your gadget slot and launch a flak cloud to impair your flying enemies.

Useful for players that rely on spotting and serves as a counter to Quick Unspot.

Designed for players that wish to stay quiet whilst navigating the battlefield, with the added benefit of being more aware of their surroundings.

Very useful in maps featuring a lot of water.

Death Toll
Lose 200 points each time you die, after the revive window

Death Toll was designed for the player that’s always at the top of the leaderboard. Points aren’t deducted until you go to the deploy screen, so you can still avoid the penalty by being revived.

Peacock
Once spotted, you remain spotted until death

This one is for sneaky players looking for an added challenge. Enemies need to initially spot you for the Affliction to take effect, so you can be extra careful and remain unspotted. Players that like to be in the thick of it shouldn’t notice much of a downside to this one, either.

Scavenger
You can only carry one magazine per weapon

Make each shot count and keep an eye out for dropped kits. Frequently switching kits on the fly creates new challenges, forcing you to quickly adapt to an ever-changing battlefield.

Reaper
Receive 1 damage per second, but performing a kill pauses the effect for 10 seconds

Since you are constantly taking damage you are always considered in combat, so you won’t be able to heal while the Affliction is active. Make sure to get a kill when health is nearby for maximum efficiency.

The gas mask limits visibility and prevents aiming down sights, but at least you’ll be safe from any deadly gas.

OTHER UPDATES (Base game):

That’s one chunky update, no?! Given the game has passed over 25 million players, it’s only logical DICE puts in this much attention to the game even after all this time has passed.

Those who want to purchase Apocalypse piece-meal can do so after two weeks.