DICE and EA have yet to officially announce any special editions of the upcoming FPS blockbuster, Battlefield 4, but that isn’t stopping retailers from advertising them.

Only a few days ago, the Battlefield 4 deluxe edition made its first appearance on the website of UK retailer GAME. 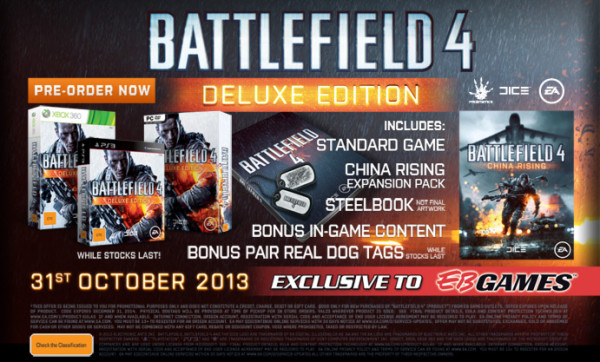 Like GAME’s listing before it, the advert lists off the contents of the Deluxe Edition, including the standard game, the China Rising expansion pack, a steelbook case and bonus in-game content. In addition, it seems ordering it from from EB Games will also net you a “bonus pair of real dog tags.”

For those interested, the official description shines a little more light on Battlefield 4’s single player campaign, revealing that it “…starts with the evacuation of American VIPs from Shanghai and follows your squad’s struggle to find its way home.”

A description of the game’s multiplayer makes mention of “Levolution,” the name that DICE is undoubtedly giving Battlefield 4’s level of destruction that will be featured in-game.

“Only in Battlefield can you demolish the buildings shielding your enemy. Only in Battlefield will you lead an assault from the back of a gun boat. Battlefield grants you the freedom to do more and be more while playing to your strengths and carving your own path to victory.

Check out the listings on the official website below: 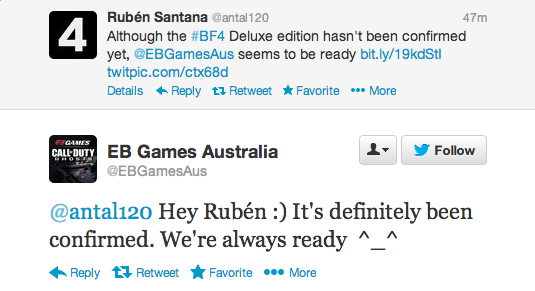 In North America, Battlefield 4 is confirmed to release on October 29 on the Xbox 360, PlayStation 3 and PC, later for the Xbox One and PlayStation 4.