It’s no secret that the Assault class is a versatile class to play as in Battlefield V. It’s so versatile that that it was the most used class in the Battlefield V beta, which was surprising given there wasn’t a lot of vehicles available in the beta.

If you like having a versatile weapon that can handle close and mid-range fights, and taking out vehicles, then the Assault class is for you (via EA).

Assault comes equipped with weapons that have effective hip-fire and respectable range. Their gadgets can weaken or destroy some vehicles, topple Fortifications, and wipe out a nest of enemies with one well-placed sticky dynamite or grenade. 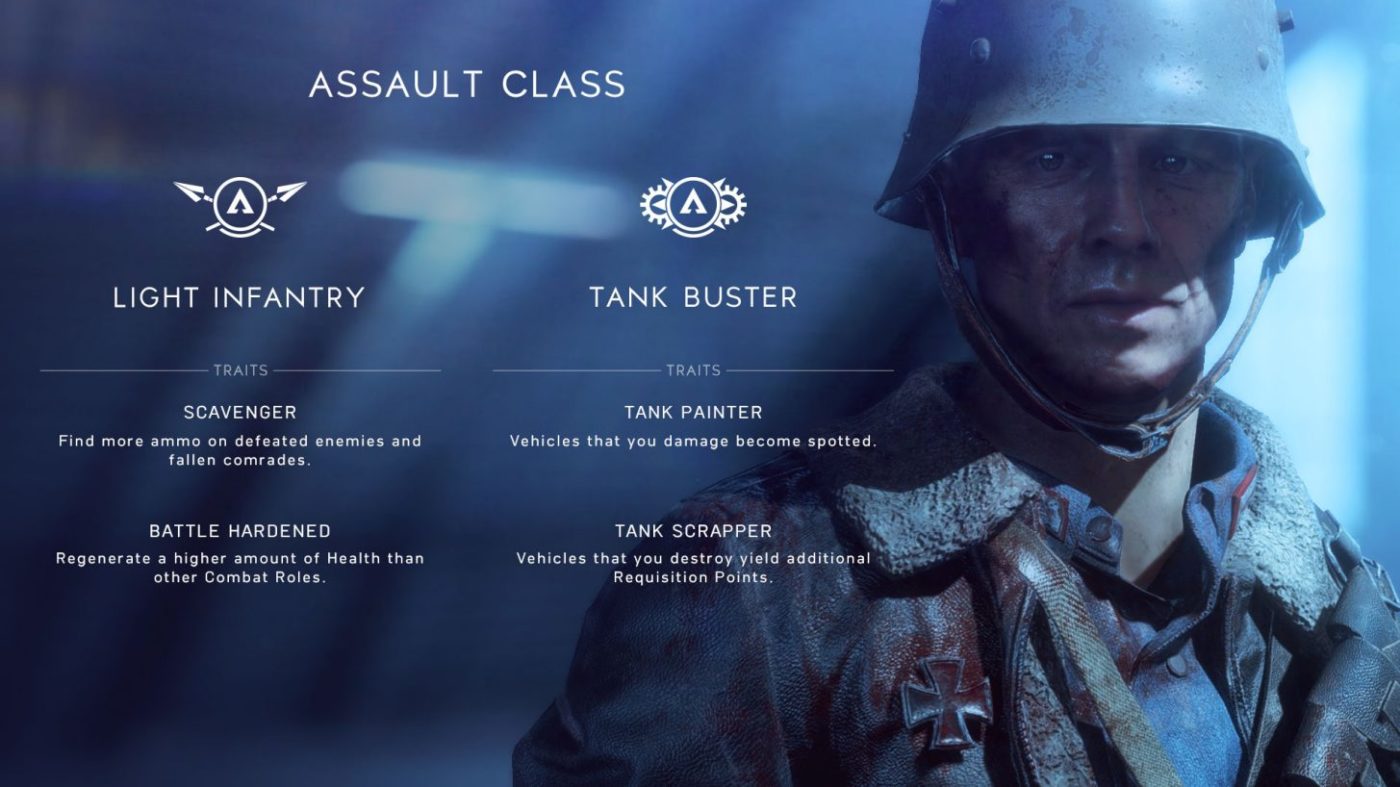 Face it, sometimes the job of the Assault is to be outright reckless, running muzzle first into the thick of battle. The first of our Assault Combat Roles, Light Infantry, compensates for the extra bullet holes you might incur in the service of your squad with the ability to regenerate more health.

This Combat Role is also for the quick draw shooter who doesn’t always have the proximity of a Support player or enough breathing room to stop and smell the supply point. You know the art of the secret ammo stash and can scavenge additional ammo from fallen soldiers.

Keep playing the Assault Class to unlock the Tank Buster. When the enemy team starts deploying tanks mid-match, spawn as the Tank Buster to soften their steel shell and automatically spot them to everyone on your team, so they can help put the tank out of its misery.

Also, if it’s you that destroys a spotted tank, you’ll reap extra Requisition Points that let your squad call in Reinforcements, like tanks and V-1 rockets, at a quicker pace.

Tips for the Assault Class:

To start, the base Assault Combat Role, Light Infantry, is the perfect entry point for newcomers and veterans alike, thanks to its straightforward traits that aim to give this Combat Role an increased durability and a decreased reliance on assistance from teammates to secure an objective.

Try sprinting between fallen soldiers to collect their dropped ammo – you will always find more than others.

The second Assault Combat Role, Tank Buster, comes equipped with two traits designed to better the odds against vehicles. Simply by damaging a vehicle when playing as the Vehicle Buster, you will spot that vehicle for your entire team. This can make a huge difference for the rest of your team in being able to help take it out – even your friends who are piloting airplanes in the skies above will clearly see the vehicle spotted below for an easier bombing run or strafing run.

Don’t forget to use your mines, dynamite, or rocket launcher to damage a vehicle, too. Even if you don’t manage to destroy it, it is now spotted for your entire team to see.

Stay tuned later this week for more info regarding Battlefield V! Don’t forget to check out the MP1st Battlefield V hub page for the latest news and info.