Just as DICE promised, this week Battlefield V fans will finally get to see some more info on Tides of War! In a new blog post on the official Battlefield website, DICE not only revealed the roadmap for Battlefield V’s post-launch events and content, but a detailed description of each event too!

Want the super quick version? Here’s the breakdown of chapter names and dates:

According to DICE, each chapter of Tides of War will “evolve and expand the battlefield.”

Evolving Gameplay: Thrilling ways of experiencing Battlefield V will be added through fresh Fortifications, and Reinforcements. Iconic WW2 hardware like vehicles, weapons, and gadgets will also be added.

New Experiences: Play through a new single-player War Story dubbed The Last Tiger, co-op with a friend in Combined Arms, do battle royale the Battlefield™ way in Firestorm, experience new game modes and Grand Operations, and hone your skills in the upcoming Practice Range.

An Expanding World: You’ll get to deploy on fresh maps as chapters bring new battlefields. Shortly after launch, this starts with Belgium and the Panzerstorm map with tank-focused gameplay, expanding to the battlefields of Greece – and the journey will continue. 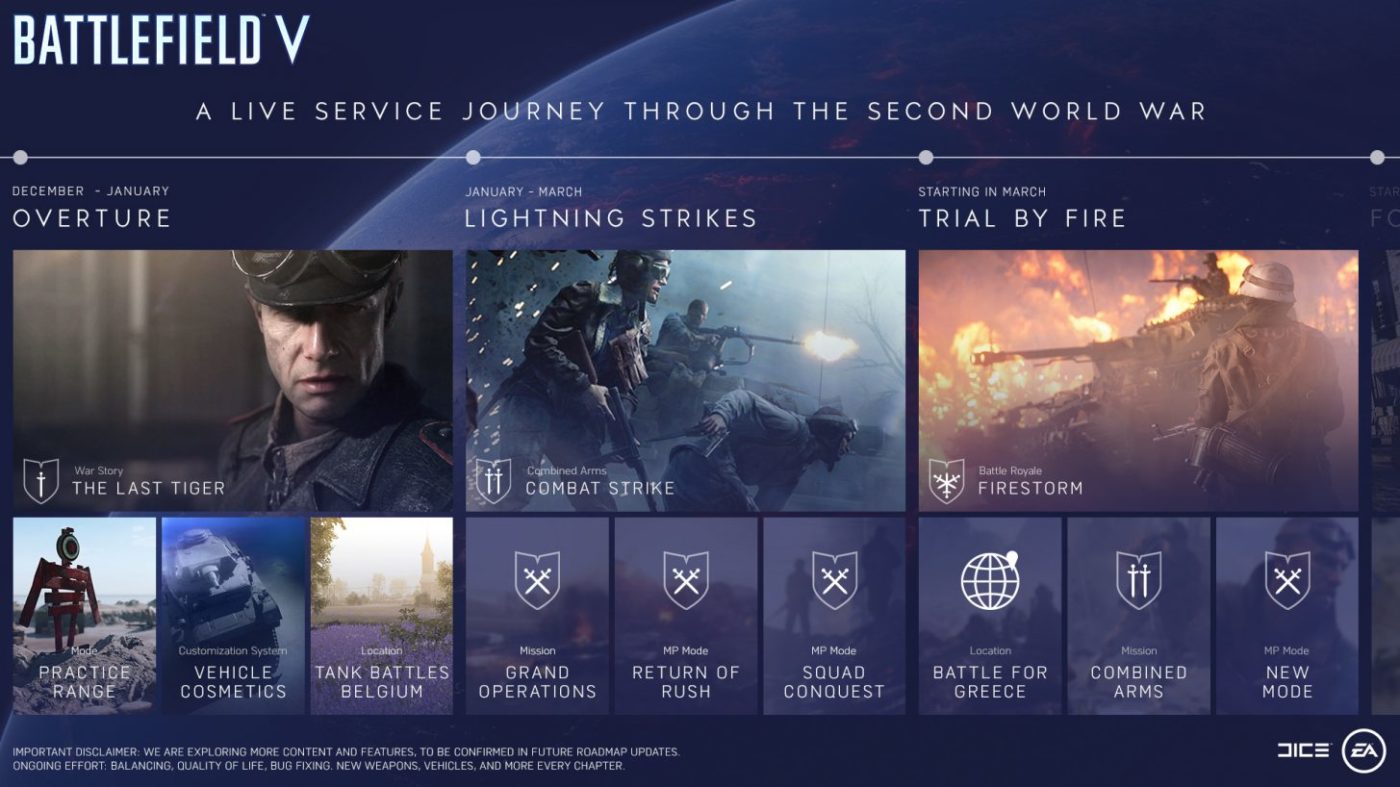 Two weeks after Battlefield V launches, DICE will kick off Tides of War and its first chapter.

Here’s what to expect:

Chapter 1: Overture event and Panzerstorm map is released:  On this tank-focused arena, you’ll roll across ridges, ditches, and elevated roads with a massive force of armor, carving a path of destruction through the countryside.

Initial iteration of Practice Range for Battlefield V will be released.

Vehicle customization will be rolled out.

According to DICE, the Overture brings weekly events and rewards that will “keep highlighting the finer details of Battlefield V gameplay.” Each event will bring a series of challenges that lets you earn new Tides of War rewards. Each time you level up your chapter rank, you’ll earn rewards.

Here’s what to expect:

Chapter two: Lightning Strikes event starts, and this one will focus on vehicular warfare and rapid infantry movement.

The co-op mode Combined Arms will be released. It will allow a squad of four to challenge AI in several maps.

Two new game modes will be added: a revamped Rush mode (no more MCOM stations, it’ll be replaced by bombs), and Squad Conquest.

Like in Overture, expect weekly rewards and events with chapter rank-up goodies.

Battle Royale will make its way to Battlefield V!

Firestorm: During spring, DICE and Criterion start the fire with Battlefield V’s battle royale experience. Firestorm elevates the mode by bringing in the best of what Battlefield is known for. Mix a shrinking playing field with trademark Battlefieldelements such as team play, powerful vehicles, and destruction, and you get many unique Battlefield moments coming your way.

Greece map is rolled out: Join a massive aerial invasion along the Cretan coast. The Allied side is desperate to cling to the island under attack by the Axis, attempting to break through the British defenses air superiority and paratroops. This map brings all-out war defined by a power struggle between tank control versus air superiority.

According to DICE, beyond the first three chapters announced, even “more experiences” will come your way like new locations, new weapons, new vehicles and more!