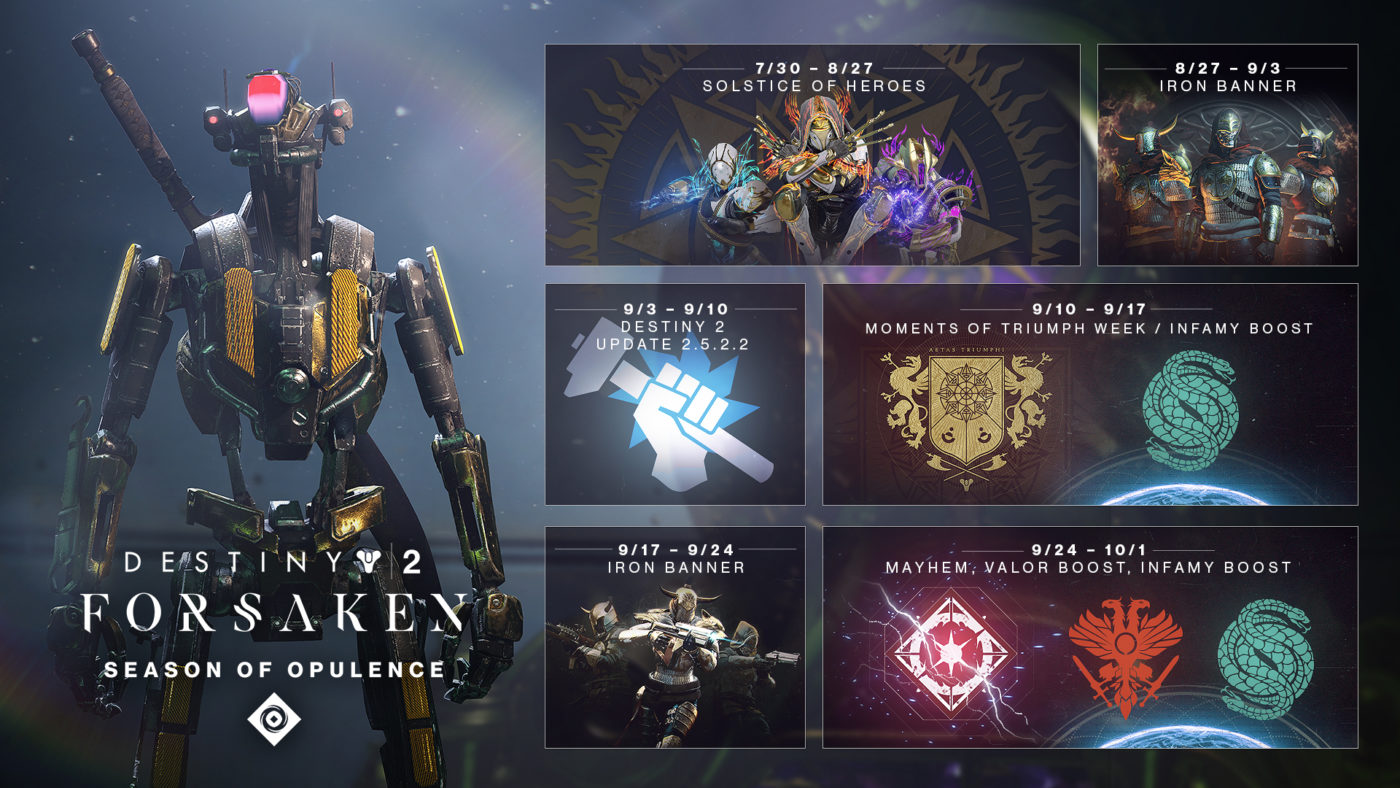 Yesterday Bungie announced the delay of Destiny 2 Shadowkeep until October 1, 2019. However, they also unveiled the Destiny 2 roadmap update for Season of Opulence, detailing what content will be filling the void between Shadokeep’s original release date, September 17, 2019, and its launch. Check out the image below, and read on for more details about what is coming to Destiny 2 over the next two months. 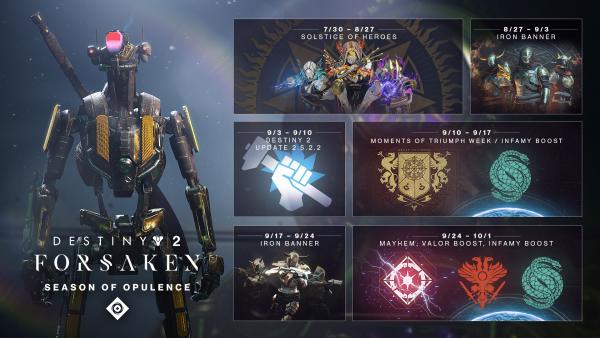 Solstice of Heroes 2019 isn’t changing at all in this roadmap, the event was always scheduled to end on August 27, 2019, and it seems as though Bungie would like it to stay this way. This could be to avoid players tiring of the new time-limited activity, EAZ, or to push them to fully upgrade their Solstice armor before the end of the season. We can also see the next scheduled Iron Banner event, which was probably always part of Season of Opulence given that it ends before the original launch date of Shadowkeep, and the fact that there have only been two during the season so far.

Between September 3 and 10, 2019 Bungie will push the next update to Destiny 2, update 2.5.2.2. During this week a special community event will also be live for players to compete in, and earn time-limited rewards from. Bungie hasn’t revealed the details of this community event yet, but they will closer to the time. With recent rumours of Gjallarhorn being the next exotic weapon to come to Destiny 2, could this be the event in which it is earned?

Between September 10 and 17, 2019 Destiny 2 will see an increase to Infamy gain. During this time anyone who plays Gambit or Reckoning will gain increased Infamy rank from those matches. Bungie has also said that prior to the event they will be making changes to Reckoning to make it easier and more accessible, so those who haven’t tried it yet can do so without fear of being destroyed by high level enemies.

Then between September 17 and 24, 2019 a fourth Iron Banner event for Season of Opulence will come to Destiny 2. This will give players another chance to complete the Iron Banner quest, which many perceive as the biggest grind in the game right now. During this Iron Banner, Bungie has said that there will be an increase to Valor rank gains from matches, making it easier to earn rewards and progress towards the seasonal Triumphs.

Finally, before the new release date for Shadowkeep, a Mayhem event will be held in the Crucible, with increased rates for both Valor and Infamy gains. Mayhem is a game mode that increases the number of Power Ammo drops per match, and makes Super energy recharge incredibly quickly. This makes for total mayhem, hence the name, as players dart around using their Supers as much as they normally use their weapons in the Crucible.

On top of this updated roadmap, Bungie is making it easier to get the best rewards from the Menagerie. Apparently Calus will rework how often chests give these rewards, which could indicate a change to the Chalice of Opulence combinations is on the way.

Call of Duty: Modern Warfare Will Have Teammates Feature Outlines So you Can See Them Through Walls