If you’re a regular reader on MP1st, chances are you’re used to seeing Battlefield 5 leaks posted on the site. We’ve had French soldier skins leaked, Elite skins, and even Italian soldier skins revealed ahead of official release. 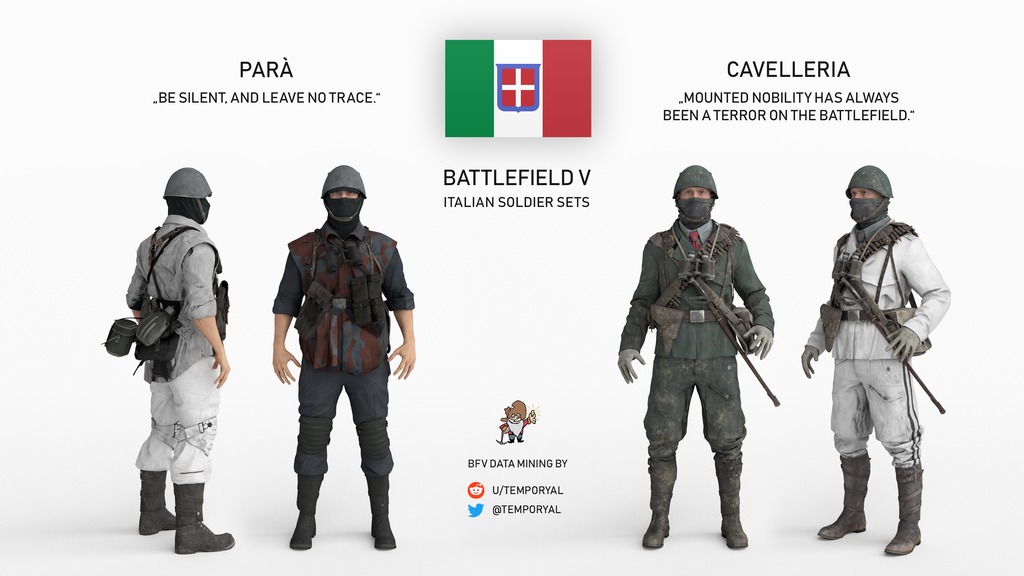 Comment from discussion Final Unreleased Italian Soldier Sets: “Parà” & “Cavelleria” – No Gas Masks but plenty of Binoculars – “Be silent, and leave no trace.”.

As almost usual right now the torso cloth below the belts is a mix of Photoshop (Cavelleria) and assets from other sets (Parà) to counter u/nielsvaes and his black magic (or “cloth simulation” as he trivializes it) so you don’t have to see a boring hole.

I’ve posted a comparison on Twitter so you can grasp the concept – expect these smaller parts to look way better at release (whenever that will be…).

Now we have seen all six Italian soldier sets (Ruvido & Specialè from the Armory, Alpini & Nachtigall in my previous posts) and there is just one unreleased french set left to do.

Rumor has it that both binoculars are just placeholders and will be swapped for gas masks in one of the next patches. 😉

If you’re not that interested in character skins, don’t forget that DICE has rolled out Grind, which is a new game mode for Battlefield 5, out today and it’ll be up for a limited time.

Dead by Daylight Endgame Collapse Introduced, Check Out How It Works in New Trailer