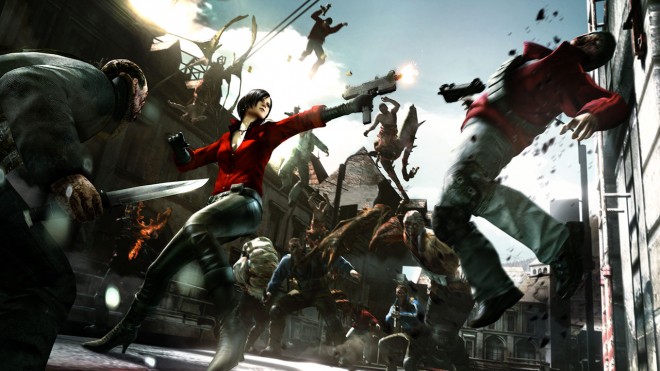 Capcom has announced that the PC version of Resident Evil 6 will include a new and exclusive game mode called “The Mercenaries: No Mercy,” which will feature a higher number of players to increase the fun.

Resident Evil 6 PC will be available as a digital download in North America on Friday March 22, 2013, with European PC gamers able to purchase both the digital version and a disc based version on the same date. The game’s price is $39.99, while in Europe it will be €29.99/£19.99.

Both digital and physical versions will include the following features, which were added to the console versions in post-launch title updates: access to Ada Wong’s campaign from the outset along with the option to play this campaign with a co-op partner, and the ability to fine tune the in-game camera. As with the console releases, players of the PC version will also be able to take advantage of ResidentEvil.net.

Owners of Resident Evil 6 will be able to further expand their gameplay experience with the release of a fourth additional mode, Siege. An online multiplayer mode for two to six players, Siege sees a lone AI-controlled rookie BSAA agent in trouble and in need of help. Players will split into two teams with one assuming control of enemy creatures who are trying to take down the rookie, while the other team selects playable characters from the main game and must keep him alive. Each game consists of two rounds with teams switching between the human and enemy roles. The human team wins a round if the BSAA agent survives, while the enemies win if they can defeat him. Siege Mode will be available in March for Xbox 360 and PS3, priced at 320MSP/$3.99/€3.99/£3.19.

It has also been confirmed that Survivors, Predator and Onslaught game add on modes will be available for PlayStation 3 owners this February, with each individually priced at $3.99/€3.99/£3.19.

All four post launch game add on modes – Survivors, Predator, Onslaught and Siege – will be available for PC owners to download and purchase shortly after March 22, with any future title updates for the console version also being made available free of charge for PC owners.

Will you be buying this March 22 the PC version of Resident Evil 6? Have you already played the console version of the game? Post your thoughts below!

MP Games You Might Have Missed – Counter-Strike: Global Offensive