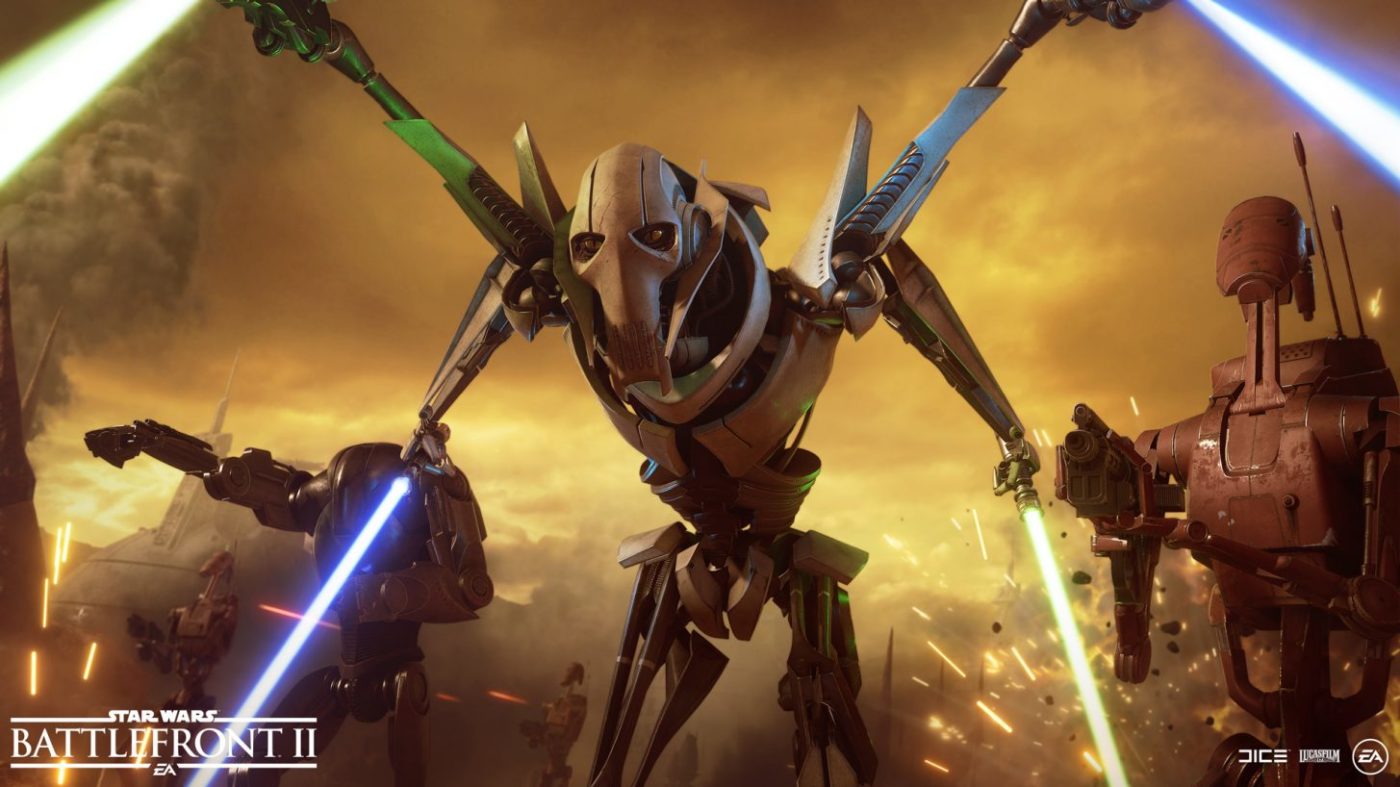 Check out General Grievous’ backstory and abilities listed below.

Becoming One of the Galaxy’s Most Notorious Villains

A towering Kaleesh, the mere presence of General Grievous caused unease amongst his enemies.

After sustaining a critical injury, Grievous’ body was transformed, and he was later taught the art of lightsaber combat by the Sith Lord Count Dooku – becoming a true embodiment of terror.

He was the Supreme Commander for the Confederacy of Independent Systems, or Separatist Alliance, in the Clone Wars against the Galactic Republic. Throughout the war, he led the droid armies in battles across the galaxy and encountered the Jedi and General Obi-Wan Kenobi numerous times. He escaped almost as many. Fostered through their clashes, General Grievous formed an arch nemesis relation to the Jedi Master.

In Star Wars Battlefront II, General Grievous is designed to instigate fear and feel like an overwhelming opponent. His body frame is among the largest compared to any other character in the game, and he engages in combat with two – sometimes four – lightsabers.

For base attack sequences, General Grievous swings two lightsabers. While on defense, he can also use the same to deflect enemy sabers and blaster shots.

But the skilled fighter was also known for his signature moves featuring no less than four Jedi weapons, which were all conquered from their previous owners (we’ve modeled his lightsabers after their appearances in Star Wars™: Episode III – Revenge of the Sith™). In Star Wars Battlefront II, we’ve transferred a couple of those moves to his Abilities.

First, we have Thrust Surge. This one was referenced from an encounter between Grievous and Obi-Wan in the Clone Wars series. The attack thrusts Grievous forward with all four lightsabers in a stabbing motion, dealing damage and throwing the target to the ground.

The second is Unrelenting Advance. As seen in another battle with Obi-Wan Kenobi in Revenge of the Sith, Grievous forms a spinning lightsaber wall in front of him, with sparks igniting from the floor, as he advances like a horrifying machine. Going into Unrelenting Advance, General Grievous blocks all frontal attacks while dealing damage to anyone foolishly standing in his way.

Speaking to his strategist side, General Grievous’ Claw Rush Ability lets him flee the scene in the blink of an eye. Once activated, he goes down on all six limbs and rushes forward, damaging and pushing opponents out of his path. An unsettling sight for enemies to behold – and highly efficient when in urgent need of an escape route.

DICE has also mentioned that another “soon-to-be-announced General Grievous appearance will come on November 28 with the Battle of Genosis update, which will also be the arrival of Obi-Wan Kenobi and the planet of Geonsis to Galactic Assault.

You can read up on Star Wars Battlefront II’s roadmap for this year and early next year right here.

Red Dead Redemption 2 Companion App Revealed, Will Allow Users to Display Info on It for a HUD-Free Experience